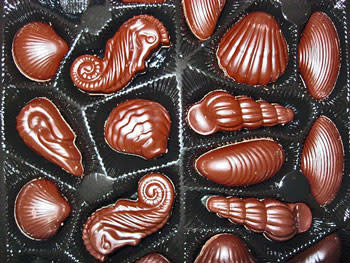 It should come as no surprise that scientists have spent many hours contemplating new tortures for the chocolate-addicted. After all, how else will science know how much, say, boredom, will affect chocolate intake? Or stress? Or watching a psychologist unwrap a chocolate bar? These are the important things, people. The latest edition of this research addresses a question close to many a cubicle drone's heart: will exercise reduce the amount of chocolate you eat while at work? Even brief exercise gives the same kind of mood boost that chocolate consumption does, and researchers were interested in seeing whether 15 minutes' walk would change how much chocolate people working on a computer ate from a nearby bowl. They had 78 people who were confirmed chocolate cravers abstain from chocolate for 2 days (that's the torturous part), then brought them into the lab to either sit quietly for 15 minutes or walk briskly on a treadmill. They then took them to a desk, casually said that the subjects could help themselves to the chocolates, and had them complete tasks of various levels of difficulty. This is the part where you lean in a little closer, because it turned out that taking a walk actually halved the amount of chocolate people ate. It didn't matter whether they'd found the tasks stressful or not, nor did age, or BMI

. It's already been shown that exercise can reduce cravings for cigarettes and alcohol, which seems similar to what could be happening in these chocoholics. But it's not a simple problem. Several

, haven't found a clear connection between exercise and changes in food consumption. You could argue, though, as the chocoholics in this study might, that chocolate can seem a lot more like a drug than a mere foodstuff.