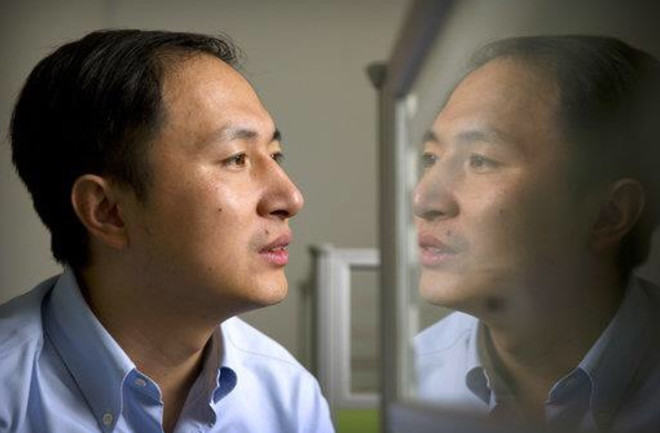 In this Oct. 10, 2018 photo, He Jiankui is reflected in a glass panel as he works at a computer at a laboratory in Shenzhen in southern China's Guangdong province. He helped make world's first genetically edited babies: twin girls whose DNA he said he altered. He revealed it Monday, Nov. 26, in Hong Kong to one of the organizers of an international conference on gene editing. (Credit: AP Photo/Mark Schiefelbein) A Chinese researcher says he used the gene editing technology CRISPR to alter the DNA of twin girls born earlier this month when the babies were embryos. If the scientist’s claims prove true, the newborns are the world’s first humans to be genetically modified as embryos. It would be a significant step, and it's raised widespread ethical concerns among researchers. He Jiankui, the scientist who led the effort, announced the outcome in a promotional video on YouTube Sunday, just days ahead of participating in an international conference on human genome editing scheduled to take place this week in Hong Kong. An independent confirmation of He’s assertion is not yet available nor has he published his results in a journal where other researchers could evaluate the claim. The Southern University of Science and Technology in Shenzhen, China where He is an associate professor released a statement indicating the institution was unaware of He’s research and that the scientist has been on unpaid leave since February of this year, circumstances that will continue through January 2021.

CRISPR has been used in adults but not eggs, sperm or embryos that have been carried to term because changes to DNA in those situations can be passed to future generations. The technology also carries the risk of affecting other genes unintentionally. The U.S. does not allow gene editing in human embryos outside of laboratory research. Although China prohibits human cloning, it does not specifically outlaw gene editing. He says he used gene editing to make babies resistant to infection with HIV, the virus that causes AIDS. “I believe this is going to help the families and their children,” He told The Associated Press, who first reported the claim. He announced his intentions with the work on a Chinese clinical trial database on November 8, 2018 well after the research was underway.

He recruited HIV-positive heterosexual couples who wanted to get pregnant through in vitro fertilization, or IVF, to participate in the work through an AIDS advocacy group. To conduct the gene editing, He first isolated sperm and egg from each couple and then inserted a single sperm into a single egg to create an embryo. Then He performed what he called “gene surgery” and added the gene editing tools to the fertilized egg. The gene editing tools modified a gene called CCR5. The edit removes the doorway through which HIV enters the cell to infect people, He said in the video. Edited embryos grew in a lab dish for three to five days, at which point He and team assessed the editing by analyzing each embryo’s entire genome to ensure the procedure worked as intended. Couples chose whether they wanted to try to get pregnant with edited or unedited embryos. All together, the researchers edited 16 of 22 embryos and 11 were used in six pregnancy attempts. When the twin girls, called Lulu and Nana to protect their privacy, were born, the researchers sequenced the girls’ whole genomes again. “No gene was changed except the one to prevent HIV infection,” He said in the video, adding that the girls are as safe and healthy as any other babies. But other researchers disagree.

Tests suggest the technology edited both copies of the gene in one of the girls, whereas only one copy was changed in her twin. Researchers that reviewed materials He presented to the Associated Press said the results “so far are insufficient to prove the editing worked or to rule out harm,” particularly for the baby with only one edited copy of the gene. He acknowledges the work is controversial and says that designer babies should be banned. But, according to the Associated Press, other researchers denounced the research as human experimentation.