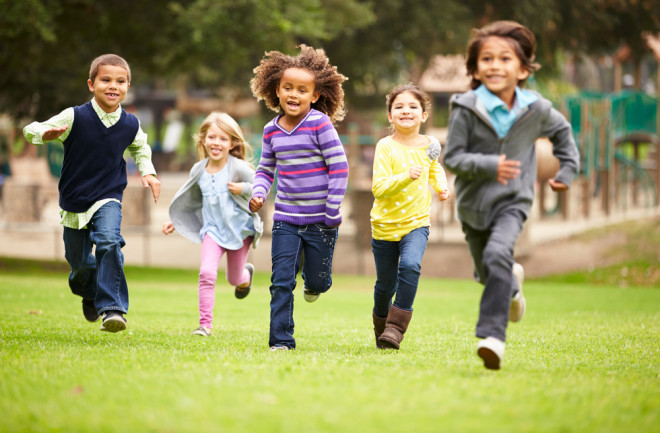 (Credit: Monkey Business Images) If you've ever tried to keep up with a child on the playground, only to collapse in a panting heap, take heart. You might as well be trying to compete with a triathlete. Researchers from France and Australia conducted a physiological test comparing 8- to 12-year-old boys with both untrained adult men and endurance athletes. The children, despite having no special training, were more comparable to the runners and triathlon competitors, the scientists say. Their bodies were better at producing energy aerobically and recovered from exertion much faster than normal men, and their heart rates returned to baseline even faster than those of the athletes. Oh, to be a child again.

The researchers used a standard cycling test to measure the fitness of 12 untrained boys, 12 untrained men and 13 endurance athletes — runners, cyclers and triathletes who trained at least 6 days a week. They measured their abilities to produce energy both aerobically and anaerobically — with or without oxygen, respectively — as well as things like their heart rates, rates of oxygen uptake, the production of waste products in the muscles, and their recovery rates. In all, it was a comprehensive look at how well their bodies dealt with exertion. And the children dealt quite well. While they weren't as strong as the adults, the children had better aerobic fitness, were better at producing power when their aerobic capabilities were maxed out, had a lower fatigue index and recovered faster than the untrained adults. In most regards, in fact, they got scores similar to those of the endurance athletes, the researchers say in research published today in Frontiers in Physiology.

No Exercise, No Problem

The children seemed to rely more on oxidative energy sources, the researchers say, meaning their aerobic muscle cells were relatively more active. These cells offer greater endurance, and it helps to explain why children don't tire as quickly as adults do. They also recover faster because their bodies produce fewer of the byproducts of muscle breakdown, like lactate, that result in sore, weak muscles, and remove them from the bloodstream more quickly. Those same abilities show up in endurance athletes who train their bodies to maximize aerobic efficiency and limit the production of these waste products. The children, however, didn't even have to work for it. The researchers suggest that children might have more efficient muscles to compensate for some of the obvious physical shortcomings of childhood. Not only are children smaller than adults, but their cardiovascular systems aren't as capable, and they usually haven't learned to move as efficiently as adults do. Their findings could be used to help study the many diseases that arise from physical inactivity, the researchers suggest, as well as offer some insights into how our bodies change as we grow into adulthood. In addition, it says that children involved in sports don't really need endurance training, and are better off focusing on strength, they say. And for the rest of us, it hints that it might be possible to reclaim something of our childhood exuberance. It just takes a whole lot of training.