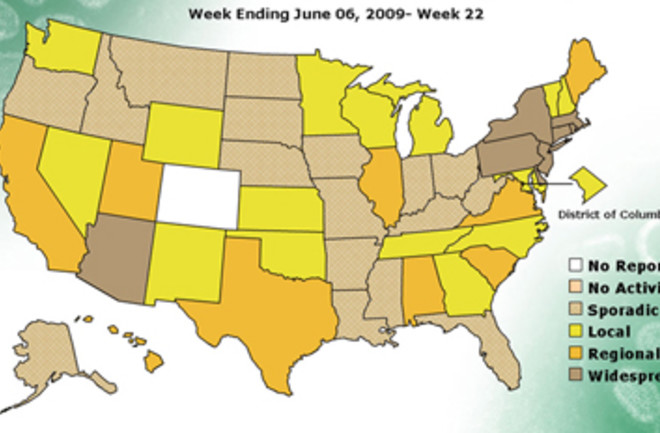 Seasonal flu outbreaks typically taper off in the warm and humid summer months, as the influenza virus can't survive as long in those conditions as it does in the cold, dry air of winter. But the current outbreak of the H1N1 swine flu virus is quite different than a typical flu season, and may produce a very different pattern of infection: It may produce

, said Daniel Jernigan of the Centers for Disease Control and Prevention. The swine flu outbreak, which the World Health Organization officially declared a pandemic last week, has continued to spread around the world, although its fatality rate remains fairly low. Health officials estimate that at least 100,000 people in the United States have been infected, 1,600 people have been hospitalized, and 44 have died. In another difference from typical seasonal flu outbreaks, the swine flu has disproportionately infected young, healthy people. Jernigan says its likely that older people have been exposed to a similar virus to the H1N1 virus at some point, which gives them some immune response to the current virus, while children are believed to have a

"complete lack of immunity to this particular virus" [Reuters]

swine flu is causing outbreaks in summer camps just as it has in schools.... Religious camps in Clayton, Ga.; Santa Rosa, Calif.; and Cleveland, Ga., and a Boy Scout camp near Asheville, N.C., all reported probable swine flu cases in local newspapers this week [The New York Times].

The outbreak has also continued to spread in the American Northeast, where unusually cool and rainy weather has promoted the virus. Health officials now say it's likely that the outbreak will continue in the United States all through the summer and will then be ready to gain force at the onset of the traditional flu season in the fall. As young people have proven to be particularly vulnerable to infection,

school children in the United States could be among the first to receive a swine flu vaccine this fall, if federal health officials decide to pursue a widespread inoculation program. Health and Human Services Secretary Kathleen Sebelius said Tuesday that she was urging school superintendents around the country to prepare for that possibility.... "If you think about vaccinating kids, schools are the logical place" [HealthDay News]

, Sebelius said. Related Content: 80beats: Swine Flu to Be Declared a Pandemic–But It’s Not as Bad as It Might Sound 80beats: Risk Factors for Severe Swine Flu Include Lung Ailments, Pregnancy, and Obesity 80beats: Swine Flu Will Likely Sicken Billions But Kill at a Low Rate 80beats: Swine Flu Outbreak May Subside, but Officials Are Wary of a Second WaveImage: Centers for Disease Control and Prevention