Caution to the Wind: Dirty Horns are the Clarion Call for Microbes

The professional musician who follows her dream of performing on the stage is greeted by an array of unusual occupational hazards. These are not limited to those late night hours spent in bars exposed to cigarette smoke and aggressive groupies but the risks of carpal tunnel, hoarseness, hearing loss, and the longterm effects of strange sleeping schedules as well. For those that provide their marching bands, funk joints, and jazz ensembles with that crucial brass sound, however, they may be at additional risk from a tiny threat hiding within their very own instrument. 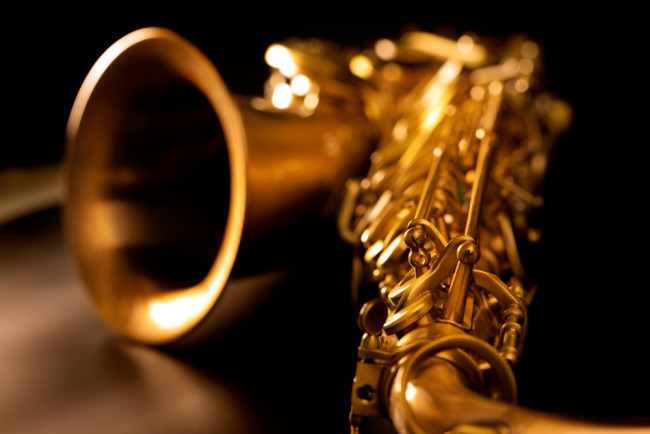 What could be hiding in this tenor saxophone? Image: Holbox.

With every breath we take, we inhale dust, microbes, fungi, pollen and even dust mites. These particles and flecks of organic matter are often swiftly dealt with by macrophages in our lungs and cause little trouble in the healthy. But for those repeatedly exposed to airborne particles for long periods of time, the immune system can sometimes mount an attack that results in an inflammatory pneumonia, known as hypersensitivity pneumonitis or extrinsic allergic alveolitis, characterized by coughing and shortness of breath.

This lung condition is often associated with those working in occupations with frequent exposure to organic airborne particles - think farmers, machinists, and woodworkers. Cases recorded in the literature include such exotic causes including cork, chicory, blue cheese, soy sauce, metal, and esparto grass used for making paper and baskets (1-5).

But hypersensitivity pneumonitis doesn’t just strike your ordinary blue-collar blue-cheese worker; it can be a common, if underreported, condition in wind musicians who are, let’s say, a bit lax in maintaining a squeaky clean brass instrument.

In 2010, a 35-year old professional trombonist finally sought medical treatment for a cough that had lasted for 15 years (6). The musician noted that "his symptoms improved significantly when he did not play his trombone for two weeks and that the periods of more severe symptoms had been when he was playing more than usual." This helpful tip lead to an inspection of his instrument where "innumerable" white plaques were sprinkled throughout, communities of pathologic organisms including the bacterial organisms Escherichia coli, Mycobacterium chelonae abscessus, Stenotrophomonas maltophilia, and a soil fungus of the Fusarium genus. An examination of his blood found serum antibodies to the exact same strains of these organisms, indicating a direct association between his moldy trombone and his cough (7).

Similarly, in 2009, a 48-year old man and life-long saxophonist had found himself experiencing difficulty breathing upon exertion for the past five months (8). A CAT scan showed his lungs filled with a mosaic of microscopic nodules. A sampling from his saxophone's mouthpiece and the case grew two soil dwelling molds, Ulocladium botrytis and a species of the Phoma genus. After three months of medical treatment "in conjunction with regular drying of the saxophone after playing and cleaning with a disinfectant," our hobbyist saxophonist beat his moldy lung infection.

And in 1988 a 65-year-old Los Angeleno who played saxophone for a local band was admitted to a hospital with a two-week history of shortness of breath and a cough that was occasionally bloody (9). A culture of his mouthpiece revealed heavy growth of three common household organisms, the fungi Candida albicans, Candida famata and a species of Cryptococcus. The authors noted that after 18 months of treatment, the musician remained healthy and now played his saxophone "with a mouthpiece which is washed with soap and water regularly."

Two small studies of brass players and their horns have found a solid evidence pointing to frequent fungal colonization of instruments, suggesting that hypersensitivity pneumonitis and other related inflammatory-related lung conditions such as chronic cough and asthma may be related to dirty horns. A study of seven brass musicians, largely trombonists and trumpeters, found that every single player had at least one instrument growing a fungal species or a mycobacterial organism (6). Five of those seven reported lower respiratory symptoms including asthma, chronic cough and occasional shortness of breath.

Another small study looking at both the lungs and instruments of 15 saxophonists found that all but two players had frequent fungal colonization of their saxes (8). Though a wild diversity of fungal organisms were found, including Fusarium oxysporum, C. albicans, Cladosporium sphaerospermum, and additional species of Penicillum, no musicians were found with evidence ofhypersensitivity pneumonitis.

What explains this intimate relationship between saprophytes and saxophones? One key feature is that some musicians may have lax cleaning standards or an interest in preserving that special sound of spit-lined brass. One physician noted in an article on “wind-instruments lung” that “most [saxophonists] brush clean their instruments and in some cases only once or twice a year. Washing with a chlorine solution or isopropyl alcohol was never mentioned” (7). The enclosed, occasionally humid and warm, space of a saxophone, trumpet or clarinet can also create a welcoming, if slightly blustery, petri dish for growing fungi and microbes.

And there’s the fact that there's a greater expansion of the lungs when playing a wind instrument compared to ordinary breathing and that many "brass players inhale with the instrument at their mouth between measures" (6). For some brass players, every deep inhalation from their instrument can give microbes a straight shot delivery to the alveoli of their lungs, that quick intake of air before a trill or vibrato a breath of not-so-fresh air.

So how do you clean that filthy thing? From the article, "Trombone Player's Lung," the authors noted that, "Because HP from exposure to aerosols containing mycobacteria or fungi is not an unusual, idiosyncratic reaction,our findings suggest that many brass musicians are at risk for HP from contaminated instruments, and standard cleaning methods may not be adequate to prevent this complication. Regular cleaning with 91% isopropyl alcohol appears to be effective."

For more thorough information on cleaning specific instruments, you can visit this webpage from the Department of Music at the University of Nevada.

This Wiki article has a nice list of musicians - largely saxophonists! - that use circular breathing during their performances.

I would be remiss if I didn't mention some of the best brass bands that exist and, conveniently, just so happen to live in my city - Rebirth, Dirty Dozen, and Soul Rebels. You can hear some of their music at this NPR article from 2010, "Five New Orleans Brass-Band Jams."

1) A Moreno-Ancillo et al. (1997) Hypersensitivity pneumonitis due to inhalation of fungi-contaminated esparto dust in a plaster worker. Allergy Asthma Proc.18(6):355-7