Case report: woman gives herself a C-section and saves her baby. 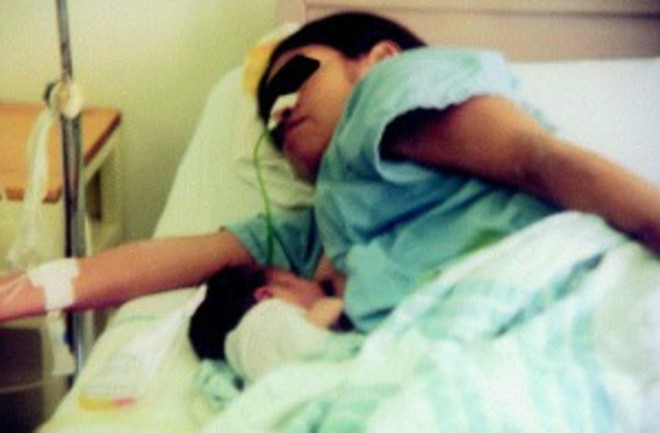 If you had to give yourself a C-section to save your unborn baby, could you do it? Having given birth to my own child, I’m not sure I could. But this woman did it. She had no other choice: she lost a previous baby during protracted labor, and she lived in a small village eight hours drive from the nearest hospital. In the abstract and detailed case report below, doctors tell her (harrowing) story. And they tell it for a good reason: “This case, which would not have occurred if prenatal and delivery care had been available, should make health providers aware that the basic reproductive needs of women are not met.” Truth.

ABSTRACT: “An unusual case of self-inflicted cesarean section with maternal and child survival is presented. No similar event was found in an Internet literature search. Because of a lack of medical assistance and a history of fetal death in utero, a 40-year-old multiparous woman unable to deliver herself alone vaginally sliced her abdomen and uterus and delivered her child. She was transferred to a hospital where she underwent repair of the incisions and had to remain hospitalized. Mother and child survived the event. Unusual and extraordinary measures to preserve their offspring sometimes moves women to extreme decisions endangering their own lives. Social, educational, and health measures should be instituted all over the world, particularly in rural areas of developing countries, to avoid such extreme events.”

CASE REPORT: “A 40-year-old, gravida 9, para 9, with 8 surviving children, was admitted to the hospital with a history of recent delivery by self-inflicted cesarean section due to a lack of medical care. Apparently, the patient’s previous pregnancy had ended in fetal death 2 years before because of obstructed labor. She had gone into labor at term but was unable to deliver her infant spontaneously. Rather than experience fetal death in utero again, she used her skills at slaughtering animals. She took 3 small glasses of hard liquor and, using a kitchen knife, sliced her abdomen in 3 attempts in the right paramedial region, cut the uterus itself longitudinally, and delivered a male infant that breathed immediately and cried. Apparently, she did not bleed excessively and asked one of her children to call a local nurse for help before she lost consciousness. The nurse provided some health care but no prenatal care to the inhabitants of that small village deprived of running water, electricity, and sanitation. She found the patient eviscerated and proceeded to reposition bowel loops, suturing the skin with an ordinary sewing needle and cotton thread. The patient was then transferred to the nearest hospital, 8 h away by car. Sixteen hours later she underwent exploratory laparotomy, repair of the right paramedial uterine incision, tubal ligation, and bowel exploration to rule out any injury. The abdominal cavity was irrigated profusely. The uterine and abdominal walls were closed in layers. A Penrose drain was placed on each flank and the patient was given triple antibiotic therapy. Her recovery was protracted because of an absence of bowel sounds and abdominal distention that increased by the third postoperative day. A flat plate of the abdomen demonstrated dilated intestinal loops with fluid levels and a nasogastric tube was placed. Because no relief was obtained from nasogastric suction, consultation with a surgeon was requested. On the seventh postoperative day she underwent exploratory laparotomy to rule out mechanical intestinal obstruction. No mechanical obstruction was found; an adhesion that caused the descending colon to be twisted, however, was released upon division. The patient recovered well, and was discharged from the hospital on the tenth postoperative day”