Care About Health? Ditch the Bucket & Get Vaccinated

Unbeknownst to many of the public, August was National Immunization Awareness Month. I know, I know: it’s been overshadowed by some very exotic and thrilling headliners this month. The Ebola epidemic blazing defiantly in West Africa. The jaw-dropping videos shown on Discovery Channel’s “Shark Week.” The ALS Ice Bucket Challenge clogging everyone’s social feeds. Vaccines are just not as sexy or as flamboyant as these issues. Truthfully, they're a bit dull to talk about, not a topic you would tend to bring up at cocktail parties or at the water cooler. But here’s the thing: Vaccine-preventable diseases kill an estimated three million people every year, with half of those deaths in children. That is five-hundred times the number of people who die every year from the devastating, progressive neurological disorder that is amyotrophic lateral sclerosis (ALS) (around 6000 deaths every year). That is seven-hundred-and-fifty-thousand times the number of people killed in shark attacks (about 4 deaths every year). So far, the Ebola epidemic has killed 1350 people in West Africa (as of August 22, 2014). There is no way to justify the importance of one death from another, or to quantify whether one death is better or worse than another. But in terms of public health impact - yes, using that crude cost-benefit analysis that ignores individuality and emotionsand class - these medical rarities pale in comparison to the millions of deaths that weactually have the power and resources to prevent and stop.  Much of the fear and hysteria behind great white sharks, a seemingly unstoppable jungle virus, or even incurable neurological diseases comes from the atmosphere of fear cultivated by the media and our popular demands for a society that minimizes harm and risk to individuals. No doubt, these diseases and deaths are horrifying for their gruesomeness, for their grim and senseless endings. That these horrible but infrequent events lie so far out from our control, along the margins of the ability of our medical and public safety measures to contain risk, adds to the horror. They are unfamiliar, unknown, and consequently we feel helpless. Not so with 20 viruses and 9 bacterial organisms. 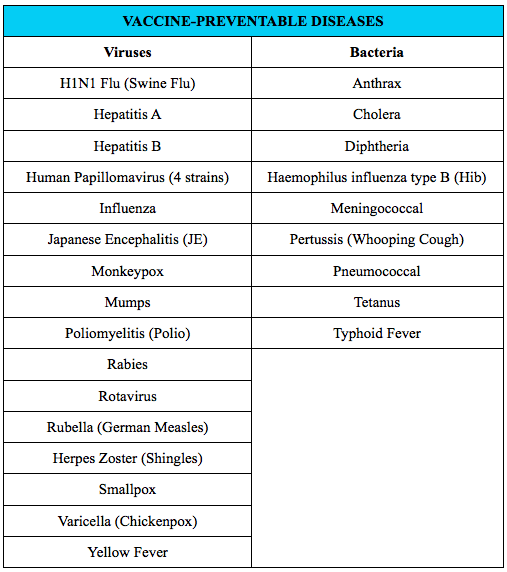 Data from the CDC. Click for source. A diarrheal virus called rotavirus kills around 450,000 children every year. There’s an oral vaccine for it.  Certain infections with the human papillomavirus (HPV) can lead to various oral and anogenital cancers that kill an estimated 250,000 every year. We have a vaccine for it that also happens to protects against genital warts. There will be soon be another vaccine that offers protection against five more strains of HPV. Haemophilus influenzae type b, a respiratory infection of children that can cause pneumonia and meningitis, kills around 200,000 every year. Due to regular usage of the vaccine, the incidence of this disease has declined by 99% in the United States though it remains a significant public health problem in undeveloped countries. Hepatitis B virus kills 600,000 people every year. There’s a vaccine for it, Twinrix, that includes hepatitis A, a virus responsible for an acute liver infection that causes nausea, vomiting, diarrhea, and occasionally liver damage. Influenza causes an estimated 250,000 to 500,000 deaths every year globally, largely among people over the age of 65. We develop vaccines for flu every year. (It is also worth noting that both flu and pneumonia are responsible for the top ten leading causes of death in the United States, among heart disease, cancer, and stroke. Note that none of the big events that have caught our attention this month are on that list.) These vaccinations that mankind has designed, developed, and that are now widely available to the public in developed nations are, hands down, the most important interventions we have to prevent illness and death in our communities. They are cheap. They are usually available after a short walk or drive to your local pharmacy. They cause few side effects. They are specifically designed to prevent morbidity and mortality. And yet, the levels of vaccine "coverage," the numbers of people who have actually received particular vaccines for their health, are woefully low. We have the resources to prevent these diseases and to make meaningful change. We just have to get them to people who need them. If you care about health, about stopping senseless deaths, about making our world a healthier and safer place for everyone, get off the internet, turn off your TV, put down that bucket of ice water and go get a vaccine and helpothersgetvaccines.