Cape Coloureds: an instance of a generality 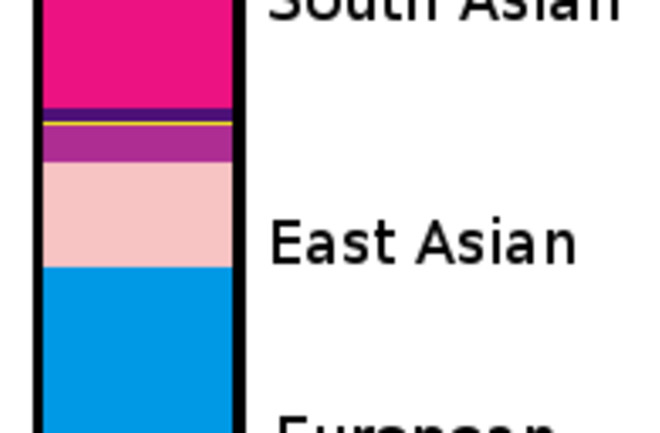 Several months ago I put up a post which reviewed the geographical connections within the total genome content of the Cape Coloureds of South Africa. These peoples (plural because distinctive ethnic groups such as the Griqua were subsumed into this category in the 20th century) are of diverse origin, though generally their African and European ancestry has been highlighted. To the left I've reedited a plot which illustrates the inferred proportion of ancestry from various groups in modern Cape Coloured populations. Note that there is a substantial proportion of Asian ancestry, both South and East Asian. This makes historical sense as during the period of the founding of the Cape Colony a substantial number of Southeast and South Asian slaves were transferred from the Dutch East Indies, as well as from Madagascar, which itself has a Southeast Asian component in its population. Additionally, observe that the Bushmen & Khoikhoi element has been separated from the Bantu element. Archaeologists assume that the former are indigenous to South Africa, while the latter arrived within the last 2,000 years as the edge of the Bantu expansion which swept out of Nigeria east and south. These two populations are obviously both African, but their common ancestry is very deep. In some phylogenies Bushmen may be represented as the outgroup to all other human lineages, implying that one has to go very far back indeed for a common ancestor. In other words, the Bushmen are not the "oldest" human population, but have the oldest point of common ancestry with other human populations (e.g., the last common ancestor between a European and an East Asian may be ~30,000 years ago, but that between a Bushmen and a European may be ~80,000 years ago). But these studies do not tell us everything about the demographic history behind the ethnogenesis of the Cape Coloureds. In this case uniparental lineages, mtDNA which traces the matriline and and nonrecombinant Y chromosomes (NRY) which trace the patriline may offer some value. Unfortunately too often because of methodological considerations we have looked at the uniparental lineages first, and then the total genome content, which I think inverts the optimal order in terms of putting genetic findings in context. A new study focuses on the Cape Coloured mtDNA and NRY lineages, with the previous findings in mind, Strong maternal Khoisan contribution to the South African coloured population: a case of gender-biased admixture:

The study of recently admixed populations provides unique tools for understanding recent population dynamics, socio-cultural factors associated with the founding of emerging populations, and the genetic basis of disease by means of admixture mapping. Historical records and recent autosomal data indicate that the South African Coloured population forms a unique highly admixed population, resulting from the encounter of different peoples from Africa, Europe, and Asia. However, little is known about the mode by which this admixed population was recently founded. Here we show, through detailed phylogeographic analyses of mitochondrial DNA and Y-chromosome variation in a large sample of South African Coloured individuals, that this population derives from at least five different parental populations (Khoisan, Bantus, Europeans, Indians, and Southeast Asians), who have differently contributed to the foundation of the South African Coloured. In addition, our analyses reveal extraordinarily unbalanced gender-specific contributions of the various population genetic components, the most striking being the massive maternal contribution of Khoisan peoples (more than 60%) and the almost negligible maternal contribution of Europeans with respect to their paternal counterparts. The overall picture of gender-biased admixture depicted in this study indicates that the modern South African Coloured population results mainly from the early encounter of European and African males with autochthonous Khoisan females of the Cape of Good Hope around 350 years ago.

The results are rather clear, excepting the difference between the MDS and admixture estimates which seem to place less weight on the Bantu component in the second than the former. The authors chalk this up to difficulties distinguishing the Khoisan from the "pan-African" component. Contemporary Khoisan show substantial overlap with Bantu groups (just as some Bantu groups in South Africa such as the Xhosa show a great deal of Khoisan ancestry), so there are some ambiguities in assigning a haplogroup to one population or the other (the overlap seems a product of recent admixture). But be as that may be, it is clear that a major dynamic in the founding of the Cape Coloureds had to be the pairing of Khoisan females with non-Khoisan males. The disjunction between European ancestry on the male and female lineages is stark, but should not be surprising in light of what we know from colonial history. And perhaps not just the colonial history of South Africa. The same pattern is evident in Latin America. Even societies which have transitioned from Mestizo to white, such as Argentina, seem to have done so through generations of male biased migration so that the indigenous mtDNA remains. And the same pattern can be found in some cases where we have no historical documentation because ethnogenesis occurred during the prehistorical period. In particular this seems the case in India, where male lineages show a strong West Eurasian bias, while female lineages do not (they are more closely related to East Eurasian lineages, though that connection is much more distant than Indian West Eurasia lineages have with other West Eurasian lineages). A little over 10 years ago L. L. Cavalli-Sforza was coauthor on a paper titled Genetic evidence for a higher female migration rate in humans. The logic behind the results are simple, most human societies are patrilocal, so one presumes that gene flow would be mediated by the movement of women between local groups. Cavalli-Sforza found that female lineages seemed to be less localized than male lineages, implying greater gene flow. The literature since then seems rather muddled, and has not confirmed this original finding in a solid manner. I suspect that this is because one general dynamic can not capture the varied events which have characterized human genetic history. That is, there were periodic "shocks" to the basic patterns of worldwide genetic variation, but after those shocks passed then the dynamics which Cavalli-Sforza saw would come to the fore. Exploring the details of the balance between these varied forces is going to be where the future avenues of research lay. I predict that it is going to be in regions and populations which have gone through great cultural ferment since the last Ice Age that you will see this palimpsest whereby variation emerged as a synthesis of shocks interleaved between long periods of stasis and more conventional deme-to-deme gene flow. By contrast, isolated hunter-gatherer populations such as the Andaman Islanders may have missed out on the shocks, the period of "genetic revolutions" (though as I imply above, most hunter-gatherer populations show a great deal of admixture with the far more numerous agricultures who marginalize them and push up against their range, as is in the case among the Bushmen). Finally, going back to South Africa one major issue is going to be the nature of the Afrikaners. Tentative earlier genetic and genealogical work suggests that ~5% of their ancestry is non-European, probably reflecting the movement of Cape Coloureds who could pass as white into the Afrikaner population (Cape Coloureds usually share language and religion with Afrikaners, so the cultural move would not have been insurmountable). Yet I have seen very few papers such as this, Deconstructing Jaco: genetic heritage of an Afrikaner. The author concludes that ~6% of his ancestry is from non-white slaves, in line with prior expectations. Though white Americans often take pride in their Native American ancestry (often genealogically attested, as with the descendants of Pocahontas) the total proportions are actually rather small, probably on the order of ~1% at most. In contrast the Afrikaners likely have more non-white ancestry because their founding population did not receive as much migration from Europe to dilute the original non-European element. Addendum: The Cape Coloureds seem a real interesting population in light of admixture mapping, no? Citation: