Can Women Grow More Eggs? Stem Cells That Might Lead to Fresh Eggs Discovered in Humans 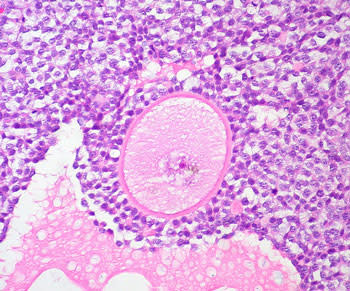 What's the News: Since the 1950s, it's been generally accepted that women are born with all the eggs they will ever have. One gets doled out with each menstrual cycle, and when they run out, you get menopause. But a smattering of papers over the last decade or so have indicated that that dogma might be incorrect: scientists found cells in the ovarian tissue of female mice that appear capable of producing new eggs. Now, working with donated tissue, researchers have found similar cells in human ovaries

. Headlines hyping the find have been spreading across the web, and we feel compelled to point out that this paper doesn't mean that we will be able to grow fresh new eggs in Petri dishes

, and it doesn't prove that in real, live women these cells actually mature into eggs that can develop into offspring

. It does, however, provide an interesting chance to see whether egg production by these cells can be jump-started using drugs. Everything You Need to Know About Eggs:

The Future Holds: Next up, Tilly and his collaborators will be investigating whether the proto-eggs they've grown from the stem cells develop into full eggs, at least in the lab, and whether those eggs can be fertilized. This could be a bit of a morally dicey proposition, but the experiments will likely take place in the UK, which has a regulatory structure set up to oversee research of this sort, ScienceNOW reports

. It's unlikely the team will ever get a chance to inject glowing green cells into women to see if they mature into full-blown eggs, but if they can gather enough indirect evidence in the lab that such a thing could be happening, they may be able to move forward with that. Reference: White, Y. A. R. et al. Nature Med. http://dx.doi.org/10.1038/nm.2669