Can the use of force by police change the outcome of a field sobriety test? 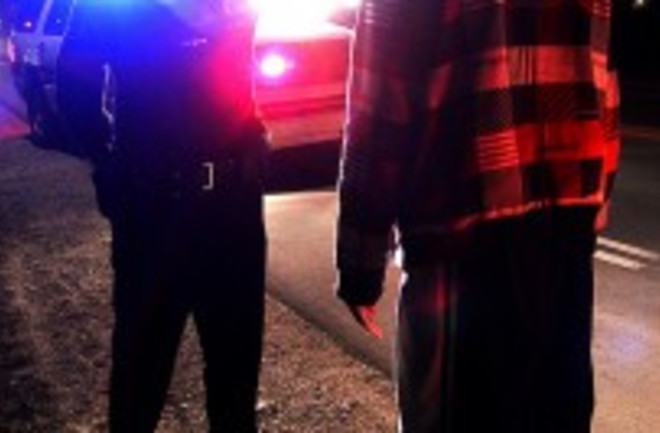 Image: Flickr/Jeffrey SmithThe "typical" DUI pullover goes something like this: you get pulled over, the cop conducts a field sobriety test, and you either pass or fail. But what if things go a little differently? What if you try to run? Or you get into a fistfight with a cop? Can the weapons at the police officer's disposal potentially make you fail, even if you *are* sober? Well, thanks to these scientists, and the pain endurance of their volunteers, we now know! To find out, the volunteers underwent a standardized field sobriety test before and after one of five unpleasant scenarios: five-seconds of zapping with an electrical weapon; a 100-yard sprint; 45-seconds of fighting; a bite from a police dog; or pepper spray in the face. Turns out, after all of that rigamarole, none of these seemed to make a difference to the outcome of the test. But maybe there's a silver lining; perhaps future officers will use this paper itself as a field sobriety test-- it has enough shorthand to make it understandable only to a teetotaler!Effect of simulated resistance, fleeing, and use of force on standardized field sobriety testing. "INTRODUCTION: When a law enforcement officer (LEO) stops a suspect believed to be operating (a vehicle) while impaired (OWI), the suspect may resist or flee, and the LEO may respond with force. The suspect may then undergo a Standardized Field Sobriety Test (SFST) to gauge impairment. It is not known whether resistance, fleeing, or actions of force can create an inaccurate SFST result. We examined the effect of resistance, fleeing, and force on the SFST. MATERIALS AND METHODS: Human volunteers were prospectively randomized to have a SFST before and after one of five scenarios: (1) five-second conducted electrical weapon exposure; (2) 100-yard (91.4 m) sprint; (3) 45-second physical fight; (4) police dog bite with protective gear; and (5) Oleoresin Capsicum spray to the face with eyes shielded. The SFST was administered and graded by a qualified LEO. After the SFST, the volunteer entered their scenario and was then administered another SFST. Data were analyzed using descriptive statistics. SFST performance was compared before and after using chi-square tests. RESULTS: Fifty-seven subjects enrolled. Three received a single-point penalty during one component of the three-component SFST pre-scenario. No subject received a penalty point in any components of the SFST post-scenario (p = 0.08). CONCLUSIONS: This is the first human study to examine the effects of physical resistance, flight, and use of force on the SFST result. We did not detect a difference in the performance of subjects taking the SFST before and after exposure to resistance, flight, or a simulated use of force." Related content: NCBI ROFL: Do cops make good human breathalyzers? NCBI ROFL: I swear I haven't been drinking, Officer. It was my gut flora! NCBI ROFL: Cutting off the nose to save the penis.