OM, the word spoken in meditation and yoga practices, has existed for nearly 5,000 years. Can chanting this small word really provide a multitude of health benefits? 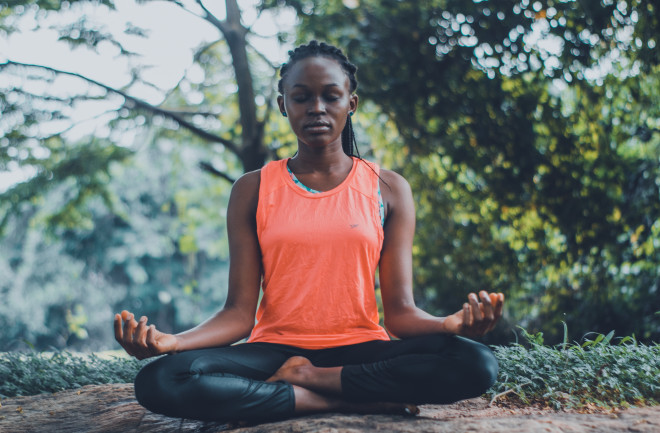 You may have heard the word "OM" during a yoga class. It's sometimes chanted three times at the beginning or end of a yoga or meditation practice.

Though it may appear to be a small word, OM is said to have roots that trace back to the origin of the world and can be found in Hindu scriptures that date back over 5,000 years ago. Molded over time as a fundamental symbol for yoga, studies show that chanting OM can provide great health benefits and reduce stress and anxiety.

With its roots in Hinduism, OM is an ancient mantra that sages believe to be the sound of universal creation. The literal translation of OM is said to be "everything and everyone," signifying that OM represents the whole world and all of its sounds.

Pronounced correctly, OM has four syllables and is pronounced AUM. When chanted, OM vibrates at the frequency of 432 Hz — the same vibrational frequency found in all things throughout nature.

The practice of chanting OM was adapted by many different groups. According to Paramahansa Yogananda, author of the classic text Autobiography of a Yogi, “OM or AUM of the Vedas became the sacred word Hum of the Tibetans, Amin of the Moslems, and Amen of the Egyptians, Greeks, Romans, Jews, and Christians.” Over time, OM has also become a symbol for yoga practice.

The Science of OM

There have been many studies done on the physiological and psychological effects of practicing meditation using the word OM. Traditionally, it is believed that one who perceives OM merges with the supreme. During meditation, the meditators typically concentrate on a picture of OM and then mentally chant OM.

“Scientifically, OM is a monosyllable, which helps to slow down respiration and prolong exhale when chanting it,” says Shirley Telles, a neurophysiologist and director of Patanjali Research Foundation in Haridwar, India. Telles helped conduct a study published in 1998 that measured autonomic changes while mentally repeating two syllables — one meaningful and the other neutral. The study chose OM as its meaningful symbol and results showed that due to the word’s significance, participants experienced an increase in focus, slower and rhythmic breathing, as well as fine tuning of the thinking cortex.

According to another scientific study on OM published in the International Journal of Yoga, “the OM chant has said to bring on a state of devoid effort and focusing, and is characterized by blissful awareness." The study also suggests that there is a combination of mental alertness with physiological rest during the practice of OM meditation.

So how exactly does OM make us feel calm? In short, scientific studies have shown that when you chant OM, an alpha wave is produced within the brain. This wave produces a state of calm. Because OM is recognized as the basic sound of the universe, chanting it symbolically and physically tunes us into that sound and acknowledges our connection to everything in the world and the universe. The rhythmic pronunciation and vibrations have a calming effect on the body and the nervous system. This, in turn, lowers the blood pressure and increases heart health.

In addition to reducing physiological signs of stress, Telles says that chanting OM can also be a therapeutic activity that many people choose to engage in. An OM paper, published in 2008 in the International Journal of Computer Science and Network Security, explored how steadiness of mind can be achieved by chanting OM. The study depicted a normal person chanting OM and compared it to the same person chanting OM after some days of practice. The study concluded that though “the normal people will not be having steadiness initially in their mind,” repeated practice of chanting OM can allow “the mind of the stressed people to reach steadiness in a few days or weeks.”

So, while a single chanting session of OM may not bring you reduced stress and anxiety, repeated practice performed in the right manner seems to bring great benefits.

More From Discover
Health
Cancer Cells Most Active During Sleep, Study Finds
Health
The Rise Of The Obesity Epidemic
Health
What Legalizing Marijuana Does to Synthetic Poisoning Cases
The Sciences
How Do Parents Understand A Baby's Cry?
Mind
People Are Drawn To Others With Similar Body Odor
Health
Social Isolation Increases Risk of Cardiovascular Issues
Recommendations From Our Store
My Science ShopDiscover STEM Kits
My Science ShopDiscover 2022 Calendar
My Science ShopStrange Science
My Science ShopElements Flashcards
Shop Now
Stay Curious
Join
Our List