A 20-something father falls apart, but for unexpected reasons. 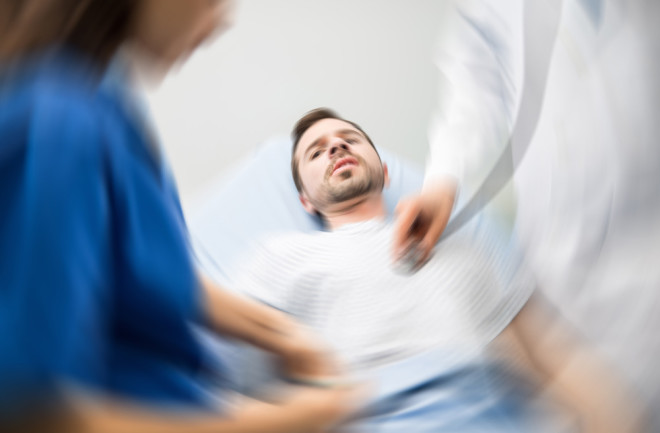 Spit flew from Sam’s mouth as he fought the handcuffs chaining him to the gurney. He swatted away a thermometer and strained against the blood pressure cuff. Eventually, a nurse calmed him enough to measure his vital signs. His blood pressure, temperature and heart rate were skyrocketing.

The nurse called me and a resident physician to his bedside. The 26-year-old was mumbling and shaking. His eyes darted and his body jerked at every loud noise in the busy ER hallway.

“What happened? Why the police escort?” I asked, glancing at the officer nearby.

“He was found like this at home,” the nurse said. “Drugs, I think. He’s been here before for meth. Sad situation.” She moved on to the next patient.

The officer filled us in on the details. A neighbor had heard a baby screaming in Sam’s apartment for hours. After knocking with no answer, she called the police, who banged down the door. They found Sam lying on the floor, shirtless and incoherent, his daughter crying in a soiled diaper beside him.

Sam’s medical chart revealed several past visits for methamphetamine intoxication, just as the nurse had said, and no mention of other medical problems. Sam was unable to add further details. He was babbling, and his speech was slurred. Blood trickled from a scalp wound on the back of his neck, the only injury we could find. Further tests revealed nothing alarming, though his urine had some blood.

“Let’s sew up his head laceration, then let him come down from his high while we wait for the urine toxicology results,” the resident said.

Sam’s cut was only a few inches long and not deep, an easy repair. But it kept bleeding as I sewed, gumming up my sutures. I had to stop after each stitch to clean away fresh blood. I recalled the trace blood in Sam’s urine. Meth shouldn’t make you bleed, I thought.

In the middle of this busy afternoon, I took a break to read Sam’s drug-screen test results. I read them three times, thinking there was an error. There were no signs of meth or any other drugs in his body. Could he have used something like bath salts or synthetic marijuana that a basic screen could miss? Did he have a rare type of brain infection not found in our primary spinal fluid testing? Or was he afflicted by something else entirely?

I returned to his bedside. Sam was clutching his bedsheet, looking confused and feverish. The whites of his eyes had a golden tinge I hadn’t noticed before. A crimson halo stained his pillow; his cut was still bleeding. I looked down at the urine collecting in his catheter. It was the color of Dr. Pepper. These findings pointed in one direction — the answer was in his blood.

A few simple tests confirmed my suspicion. His level of platelets, the cells that clot the blood, was extremely low. Under a microscope, I saw that his red blood cells were crescent-shaped and shredded rather than healthy, plump discs. His level of bilirubin — the waste left when red blood cells are damaged — was too high. His urine contained more blood, and his kidney function was worsening.

At the nurse’s station, I rummaged through the overstuffed bookshelf to find the blood disorders textbook, its binding worn and cover faded. His symptoms matched a dangerous blood condition. Sam had an unusual disease with a tongue-twisting name — thrombotic thrombocytopenic purpura, or TTP.

In TTP, an enzyme that’s essential to clotting blood malfunctions, causing platelets to stick together in large clumps. Like boulders on a road, the clumps block blood from traveling through the veins. Red blood cells fail to deliver oxygen because they break trying to get through. Without oxygen, organs start to malfunction.

Sam’s suffocating brain caused his hallucinations and confusion. Littered with destroyed red blood cells, his body became overwhelmed with bilirubin, staining the whites of his eyes yellow. His skin blossomed with purpura, a rash resulting from clots blocking and bursting capillaries. With most of his platelets preoccupied in dysfunctional clumps, the bleeding from his head wouldn’t stop.

Sam’s blood, ironically, was clotting too much and therefore unable to clot when actually needed. He needed treatment fast; without it, he could have a seizure or stroke and die.

We watched as Sam’s blood flowed out of his body and into the hulking machine next to his bed, whirring and spinning as it replaced his plasma with that of a donor. This exchange clears the blood of autoantibodies, the rogue elements that attack an essential clotting enzyme, leading to TTP.

Often TTP is related to another condition — lupus, pregnancy or HIV infection — or a medication such as chemotherapy or quinine. It’s occasionally due to a genetic flaw that leaves a clotting enzyme defective. In about half of all cases, it is an autoimmune condition. Instead of performing its usual role fighting bacteria or viruses, the immune system attacks the body’s own clotting system. This is what happened to Sam.

Between plasma-exchange treatments, Sam passed his time lifting small hand weights and doing push-ups. “Gotta keep my strength up,” he said most mornings when we checked in on him. He impressed us with his wit. Photos of his daughter filled his bedside table. After a few days of treatment, Sam was discharged from the hospital.

But his plight wasn’t over.

Months later, Sam was back in the emergency room, feeling foggy, hot, fatigued and blooming with bruises. No one thought he was high this time. His TTP had returned despite the plasma exchanges. Doctors gave him steroids to calm his immune system, and a drug called rituximab to halt production of his destructive autoantibodies.

That seemed to do the trick. But a few months later, while shaving at home, Sam noticed in the bathroom mirror that his eyes were yellow and that a small shaving cut on his chin wouldn’t stop bleeding. He returned to the ER, where the second return of his TTP was confirmed.

The only hope left was to remove his spleen. Normally the spleen sits in the abdomen where it cleans and stores blood cells. In autoimmune TTP, the spleen harbors the cells that produce autoantibodies. Without a spleen, Sam’s body might stop making these attackers, finally allowing his enzymes and platelets to work undisturbed.

Sam’s surgery was a success; his TTP never returned. His blood kept flowing smoothly, only clotting when needed to repair life’s cuts and scratches.

At times, physicians find what we expect to find, causing us to be lulled by our assumptions. We assumed Sam’s symptoms were related to meth because of his past. His case reminded me to always keep an open mind when making a diagnosis — even in the face of persuasive circumstantial evidence.