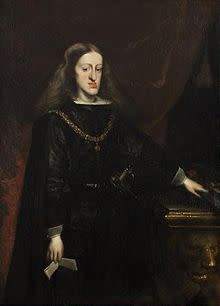 Last of the Spanish Habsburgs

The New York Times has a long piece

out, Can the Bulldog Be Saved?

To a great extent it is a parable of the problems with purebred dogs. Domestic dogs are much more homozygous

than humans. That is, for their two gene copies they are much more likely to exhibit similarity than humans. This is usually due to inbreeding, where a few ancestral dogs with the required traits are bred, and then selection operates upon the progeny to reduce the effective population size even more. This means that many dog breeds are in danger of pedigree collapse

, where they are so inbred that going back enough generations results in a convergence of the family tree. But the story of the bulldog isn't just about inbreeding: it's about correlated response. If you select upon a trait of interest, you generally produce side effects due to pleiotropy

. That is, you shift the allele frequencies at locus X, which produces the outcome you want on trait 1, but also incidental outcomes on trait 2 to trait n. As stated in the piece: “Bulldogs could be as outbred as mongrel dogs in the streets of Calcutta, but if they keep that phenotype, they are not going very far.” The bulldog is profoundly unnatural in shape and gait. In other words, the issues here are not just genetic, but they're biophysical. 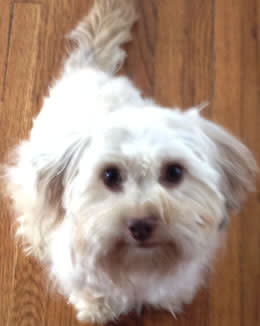 In other news, Sheril

just brought home a dog from the shelter. The little dude needs a name, so go on over and offer up some suggestions!