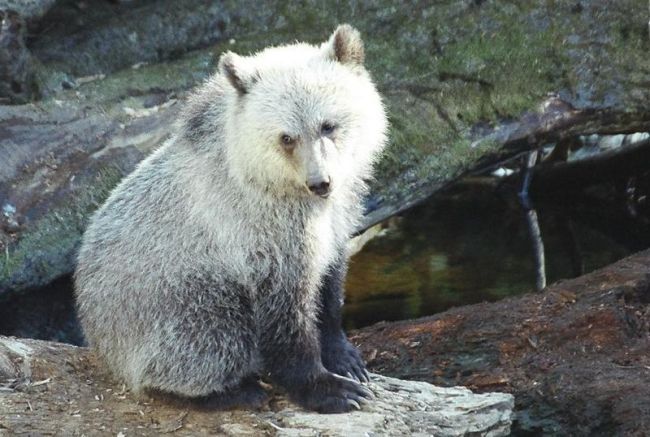 Bears are big deal today. I've talked about this before, so I won't belabor the point in this post. Rather, I want to persuade you that there's a really interesting paper out in PLOS Genetics right now, Genomic Evidence for Island Population Conversion Resolves Conflicting Theories of Polar Bear Evolution. I know that seems like a mouthful, and despite the fact that I nodded to the reality that this is highly relevant in part because of policy concerns, the paper itself makes salient the reality that oftentimes we are confronted with the juxtposition between useful abstractions and the empirical shape of the world. In this case the abstraction is that of species, the one taxonomic category which many people find to be a natural kind, so to speak. These sorts of confusions of our expectations are often highly informative. They illustrate the limits of our abstractions, and drive us toward more complex and/or elegant formalisms which are capable of modeling nature as it is, rather than as it we wish it would be. The peculiar result is that a few years ago some researchers began to report that brown bears were a paraphyletic species. That just means that the last common ancestor of all modern brown bears has descendants who are not brown bears. In this case, polar bears. Specifically, these results were derived using mtDNA, and they showed that the brown bears of the ABC islands in Alaska seem to cluster with polar bears, and not other brown bears. The figure below from a 2010 paper outlines the lay of the land. 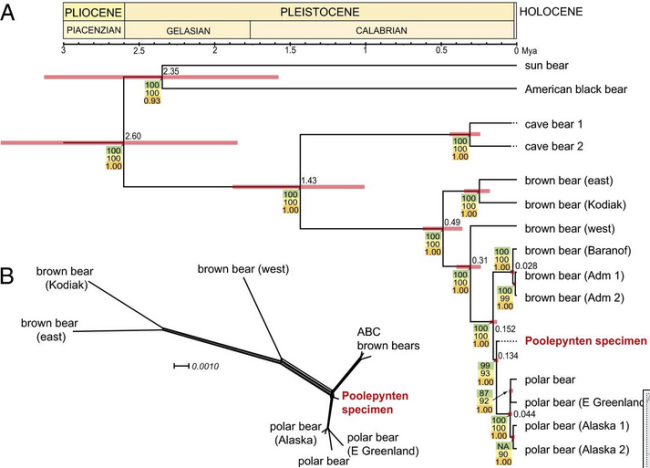 Look at the timeline above. If it's right then polar bears are a very recently derived lineage out of the genetic background of brown bears. But there's a problem. The nuclear DNA, which is most of the DNA, tell a different story. You can follow all the gory details on the Wikipedia page. Let's get to the author summary of the PLOS paper:

The evolutionary genetic relationship between polar bears (Ursus maritimus) and brown bears (U. arctos) is a subject of continuing controversy. To address this we generated genome-wide sequence data for seven polar bears, two brown bears (including one from the enigmatic ABC Islands population), and a black bear (U. americanus). These data reveal remarkable genetic homogeneity within polar bears and clear evidence of past hybridization with brown bears. Hybridization, however, appears to be limited to habitat islands, where isolated populations of polar bears are gradually converted into brown bears via male-mediated dispersal and sex-biased gene flow. Our simplified and comprehensive model for the origin and evolution of polar bears resolves conflicting interpretations of mitochondrial and nuclear genetic data, and highlights the potential effect of natural climate change on long-term evolutionary processes.

That answers the discordant results between mtDNA and autosomal results easy enough. If gene flow is overwhelmingly male mediated then little of the polar bear mtDNA will be replaced, since that is passed only through the mothers. And interestingly the X chromosome of the ABC brown bears still has a signature of polar bear ancestry! Actually, that's not interesting, it strongly argues for the plausibility of the above model, because male mediated gene flow will replace ancestral X chromosomes more slowly (2/3 of X chromosomes are found in females in a sex balanced scenario). All this is not a very shocking model. This seems to have occurred with Argentina. A predominantly white nation, it turns out Argentines have a very high frequency of Amerindian mtDNA. What does this have to with abstractions and empirical reality? Ultimately it goes back to folk biology, and adherence to a Platonic species concept. In many domains this is useful and sane. Clear and distinct ideas with boundaries are necessary for thought. But when thinking on an evolutionary genetic scale excessive focus on a Platonic species concept can mislead. The same applies to other scientific domains. One speaks of "solid" matter, but on a molecular scale most of the solidity of the matter is not a function of material (i.e., subatomic particles), but the electromagnetic force. But in most situations the abstraction is useful. We simply have to always be careful not to confuse our useful shorthand for the real state of affairs. Similarly, species as a concept has stood the time. Even though the term is obviously anthropocentric. It makes no sense for asexual organisms. And even plants, which hybridize promiscuously, are often ill-served by it. Nevertheless for many purposes the biological species concept works fine in the contexts which are relevant and important to us. The key is not to confuse a useful abstraction for reality. Speaking of abstraction, mathematics is useful for science, but it isn't science (by this, I mean I think it can be a science, but science itself is not pure mathematics). When it comes to charismatic fauna and their natural history I often imagine a dramatis personæ, with characters coming onto the scene, and sometimes fading. But these points in space and time which we fix upon as the hinges of the narrative arc are subject to a thick and complex scaffold of dynamics and forces, of which only the distinct phenotypes we have in mind are the final outcome In the case of the polar bear, it has become totemic of great arctic fauna under threat by climate change. So they have always been, so they are, and hopefully so they shall always be. But the results above show that reality was likely always more complicated, as brown bears and polar bears impinged upon each other's territory, and may have been involved in gene flow over the course of millions of years. The realty may be a complex and hidden back story which we are only now becoming privy to. Fixating upon distinct and clear species categories is one of the best ways to keep this hidden structure masked, as well explain away the "anomalies." Citation: Cahill JA, Green RE, Fulton TL, Stiller M, Jay F, et al. (2013) Genomic Evidence for Island Population Conversion Resolves Conflicting Theories of Polar Bear Evolution. PLoS Genet 9(3): e1003345. doi:10.1371/journal.pgen.1003345