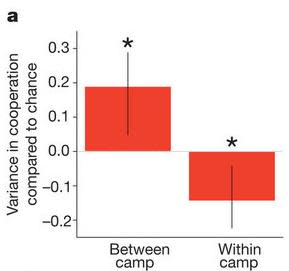 There is a new paper in Nature, Social networks and cooperation in hunter-gatherers, which is very interesting. As Joe Henrich observes in his view piece the panel of figure 2 (see left) is probably the most important section. The study focuses on the Hadza, a hunter-gatherer population of Tanzania. Their language seems to be an isolate, though there have been suggestions of a connection to Khoisan. Additionally the genetic evidences tells us that like the Bushmen and Pygmies the Hadza do descend from populations which are basal to other human lineages, and were likely resident in their homeland before the arrival of farmers. And it is critical to also note that the Hadza are probably uninterrupted hunter-gatherers in terms of the history of their lifestyle, as agriculture likely arrived in Tanzania on the order of two thousand years ago, and their genetic distinctiveness indicates a separation from groups like Bantus far deeper in time. When it comes to Paleolithic model populations the Hadza are relatively "uncontaminated." So how does 2a matter? It shows a sharp discontinuity in cooperation across Hadza camps, all things controlled. There have been debates about the level of analysis necessary to explain human cooperation, with reductionists focused on the individual, arguing that dynamics such as kin selection and reciprocal altruism can explain the complexity we see around us simply through extension (e.g., universalist religious ideologies and philosophies usually appeal to fictive kinship or the golden rule). These data instead given some support to models which posit that group-level cultural dynamics must also be taken into account. Remember though that these more complicated systems don't deny the importance of kin selection and reciprocal altruism; they only posit that there are other forces which can't easily be reduced to these two. 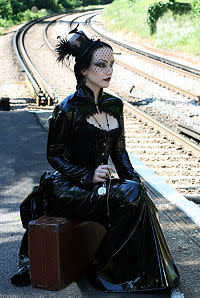 The peculiarity of figure 2a illustrates the difference between transmission of culture, memes, and biology, genes. The Hadza are a small population, and genetically rather homogeneous in relation to their neighbors (to my knowledge they don't exhibit much population substructure). It is difficult for between group variance to develop between human populations with adjacent residence patterns because even small amounts of migration rapidly equilibrate gene frequencies. This is why biologists have traditionally been skeptical of selection across groups. If the two entities are nearly clonal (because the groups do not differ much) then evolution by natural selection can not operate across the groups (remember, being clonal at the scale of the group does not mean there isn't variation within groups, so selection still operates, just at a "lower" scale). But human culture is very different. Novel groups with their own distinctive cues can emerge very rapidly, and generate horizontal networks of affinity. Sometimes, as with accents, it is rather difficult for outsiders to a group to mimic and deceive because of a biologically "critical period" of enculturation (this might also be the role that radical body modification plays in a functional sense; it's a difficult-to-fake identity marker, often irreversible). 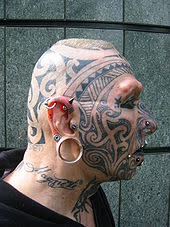 That's the theory. The main problem with these group-level models is that there's always a lot of talk (theory), but a lot less empirical data. Hopefully that will change. The paper used a lot of experimental methods, and these are probably the way to go. Obviously you can't put people in life or death situations, but you can at least discern general and specific patterns cross-culturally. And are these canned "games" any less valid than surveys to the WEIRD set? Citation: Social networks and cooperation in hunter-gatherers, doi:10.1038/nature10736