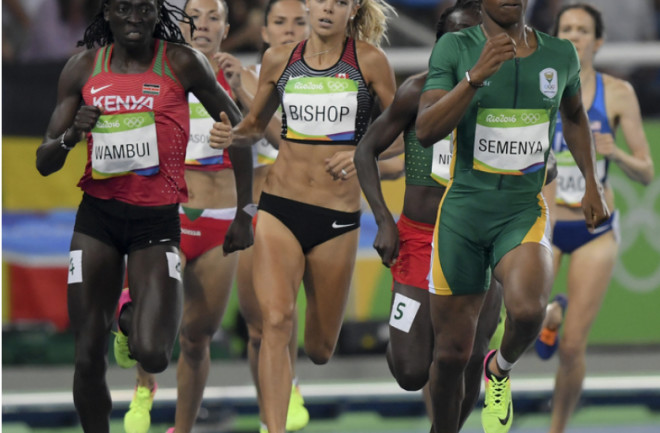 Caster Semenya (right) competes during the 2016 Summer Olympics in Rio de Janeiro. Semenya filed a discrimination lawsuit against the International Association of Athletics Federations, challenging a rule that female athletes’ testosterone levels must be below a certain limit. (Credit: CP DC Press/Shutterstock)

Though some researchers and activists think that anyone identifying as female should participate in women’s athletic competitions, the International Association of Athletics Federations (IAAF) maintains that runners in certain track events have to lower their testosterone levels to below a concentration of 5 nanomoles per liter. (The average female range is 0.28 to 2.08 nanomoles per liter.) The rationale is that similar hormone levels ensure similar physical capabilities and a fair competition.

The study, which was paid for and conducted by members of the IAAF, adds to debates around the organization’s requirement that female athletes with high testosterone levels suppress the hormone.

But as this new paper, published in the British Journal of Sports Medicine, points out, very little research has investigated how testosterone levels impact physical performances in women.

To learn more about that relationship, the authors recruited 48 women to either apply a testosterone cream or an unmodified, hormone-free cream every day for 10 weeks. The researchers measured hormone levels and physical abilities — like how long they could run until they were exhausted and how much power they could generate on a stationary bike — before treatment began and at the end of 10 weeks.

Those taking the testosterone cream saw their hormone levels rise from an average of 0.9 to 4.3 nanomoles per liter — a concentration below what the IAAF requires and between average male and female levels.

While the participants didn’t pedal harder than women who didn’t receive testosterone, they could run about 15.5 seconds, or 8 percent, longer before they were exhausted. In sports, an 8 percent improvement is a large margin, says Angelica Lindén Hirschberg, of Sweden’s Karolinska Institutet and a coauthor on the study, in an email.

Because running to exhaustion is a measure of endurance, those results are particularly relevant to the track events regulated by the IAAF, she says. When assessed with the Body Mass Index, the hormone recipients also developed a higher lean body weight than the untreated women.

The authors acknowledge that the study is small, didn’t use elite athletes, and didn’t put the participants in the typical male hormone range, which some females athletes may reach. Researchers hesitate to induce those high testosterone levels in women, Hirschberg says, because of concerns that it could deepen the voices and shrink the breasts of study participants.

The results, however, align with the rationale behind the IAAF’s current rules — which were upheld in court this May after Caster Semenya, one of the most prominent track athletes impacted by this regulation, filed a discrimination lawsuit. Hirschberg and her research team will continue exploring the relationship between testosterone and physical performance by analyzing how the hormone works within muscle tissue, she says.