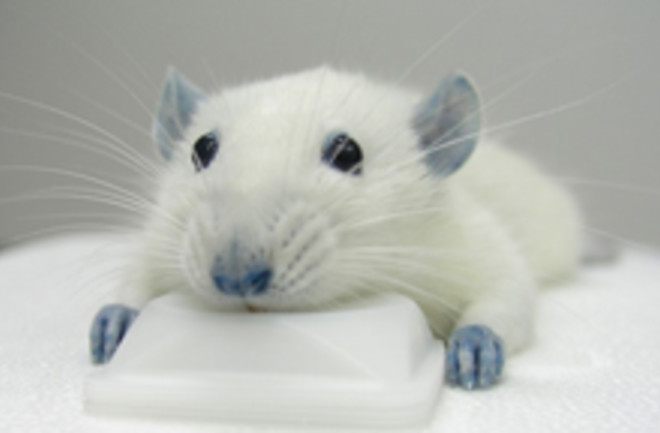 A chemical compound similar to the blue food dye found in blue M&Ms and blue Gatorade could one day be used to treat people with spinal injuries, and could reduce damage and improve mobility, according to a new study. Researchers

found that when they injected the compound Brilliant Blue G (BBG) into rats suffering spinal cord injuries, the rodents were able to walk again, albeit with a limp. The only side effect was that the treated mice temporarily turned blue [CNN].

had previously shown that ATP, a vital energy source that keeps the body's cells alive, quickly pours into the area surrounding a spinal cord injury after it occurs. Unfortunately, the release of ATP at hundreds of times the normal level kills off healthy, uninjured motor neuron cells by flooding them with a deluge of molecular signals, making the initial injury worse [BBC News].

In the new experiment, described in the Proceedings of the National Academy of Sciences, the blue compound prevented ATP from latching on to the motor neuron cells, and therefore prevented the secondary damage that occurs in the hours after a spine injury. Lead researcher Maiken Nedergaard says the work could lead to a medical breakthrough.

“We have no treatment at all right now for most patients with spinal cord injury,” she said. “Right now we’re just observing patients get worse” [Wired.com].

What's more, since the FDA approved the closely related food additive known as blue dye No. 1 in 1928, there's almost a century of proof showing that the compound is safe.

“Each of us in United States eats about 14 milligrams of blue dye per day,” Nedergaard said. “It’s in anything blue, in M&Ms, in Gatorade, in Jell-O. We eat 100 million pounds a year in the U.S., so we already know that there’s no toxicity” [Wired.com].

However, much work still must be done before BBG can be tested in humans. Spinal injury expert Mark Bacon notes that

"the levels ingested in food stuffs don't make us go blue, as is the case in the group's experimental studies on rats, suggesting the therapeutic dose needed to protect the spinal cord from ATP toxicity is far, far higher than that experienced in daily life. What is safe at one dose may not be safe at higher doses" [BBC News]

, he says. Nedergaard also wants to determine how soon after injury BBG must be injected in order to have a beneficial effect; the mice were injected 15 minutes after injury, but most people don't get to the hospital within 15 minutes of a serious accident. Related Content: 80beats: FDA Approves the First Clinical Trials Using Embryonic Stem Cells 80beats: Scientists Identify Two Routes to Nerve Cell Regeneration 80beats: Monkeys Use a Electronic Brain Interface to Move Paralyzed Limbs Image: University of Rochester

More From Discover
Health
Ibogaine: The Psychedelic Drug That Could Fight Addiction
Health
Hugging Is an Evolutionary Tool for Survival
Health
The Other Magic Mushroom: Why a Canadian Startup Is Suddenly Interested in the Fungus From Super Mario
Recommendations From Our Store
My Science ShopCosmos: Possible Worlds
My Science ShopStrange Science
My Science ShopEinstein's Universe
My Science ShopElements Flashcards
Shop Now
Stay Curious
Join
Our List