Blondes of the 'black islands' 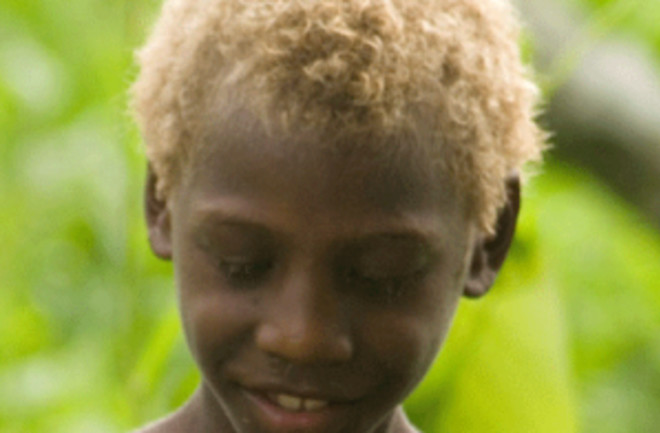 Recently I was looking for images of the alpine biomes of the New Guinea highlands* and stumbled onto some intriguing, though not entirely surprising, set of photographs of individuals from Papua New Guinea. They were noteworthy because they manifested the conventional Melanesian physical type, but their hair had a blonde cast to it. For example, here is a charming blonde boy. The photographer has several other striking portraits of Melanesians with lighter hair at his website. In regards to the peculiar hair color of these people he says: "When you ask the people why there are so many blonde people on the islands, they answer 3 things: they have white ancestors, they receive too much sun, or they do not eat enough vitamins! - Langania village, New Ireland, Papua New Guinea." There is more discussion in the comments about this issue, some claiming that likely it is the sea water and sun which is producing bleaching naturally. If you look around you will see references to bleaching of hair among some of these people as a cultural trait, though the references tend not to be concrete (many clearly assume they're bleaching their hair, rather than reporting bleaching). The blonde being at the tips from what I can tell in some cases I certainly don't reject the explanation that bleaching is a cultural practice among these peoples, albeit for children and women only. But the peculiar hair color of these populations is noted in the scientific literature as if it is a biological characteristic of these groups, not a cultural artifact. From Molecular genetic evidence for the human settlement of the Pacifc: analysis of mitochondrial DNA, Y chromosome and HLA markers: "The Tolais of New Britain are phenotypically 'Melanesian', with fairly dark skin and frizzy hair, some-times almost blonde as in some highland Papuan groups." Enter Tolai 'New Britain' into Google Images and the first few pages have several instances of blonde children, including this cute triplet. Before we go any further, I want to express my skepticism at the idea that this is European admixture. The loci associated with higher odds of having blonde hair in Europeans, OCA2, KITLG, etc., also result in light skin, and secondarily blue eyes. In other words in Europeans blonde hair is to a large extent one effect of generalized depigmentation. There is no magic "blonde gene" which operates independently from the variants which produce lighter skin, or lighter eyes. Though the outcome is not deterministic, the probabilities make it so that someone who has naturally blonde hair is very unlikely to have dark brown skin, at least in any genetic architecture we're familiar with in Europeans (e.g., African Americans with light eyes and/or hair, also tend to be light skinned). But if you want more than my logic above, here's a STRUCTURE plot from The Genetic Structure of Pacific Islanders:

I reedited for clarity. Remember that K = putative ancestral populations. So you're looking for population substructure, and inferred admixture. I've compared the Oceanian groups to French from the HGDP sample. The Polynesians in the sample have clear European admixture, but the Melanesians generally do not. The aforementioned Tolai are one of the groups analyzed in this paper, and contrary to one of their explanations for their high frequency of blondness they do not some to have any European ancestry. What about bleaching? I will be interested to hear what readers have seen, but to my limited knowledge dark skinned populations in other oceanic environments do not seem to have such bleached hair. But, relatively simple forms of hair bleaching do exist which would be possible for a less affluent population to practice as a rite of some sort, or perhaps for simple aesthetic reasons. I put a modest probability on this being the full explanation for this phenotype, and a high probability for it being some of the explanation. So let's move to the most novel explanation: that the populations of Oceania have an independent genetic architecture for the emergence of lighter hair color. For me the biggest factor to weight in this hypothesis' favor is that to my knowledge there are only two population groups in the world which have an appreciable frequency of lighter hair which are not of West Eurasian origin, and they are the indigenous peoples of Melanesia and the Australian desert (this trait seems to be relatively common in the children of the Warlpiri people for example). As we noted last week these two populations form a natural phylogenetic clade, so it seems highly coincidental to me that both exhibit the unique phenotype of relatively dark general pigmentation, but lightness of hair. Additionally, like Europeans lighter hair color seems to be concentrated among children and women in both these groups, aligning with what we know are the correlations of pigmentation and hormones (males and adults are darker). One obvious model for the blondeness of central desert Australian Aboriginals is European admixture. But the same problems emerge as in the case of the Melanesians: of presumed European traits only the blonde hair expresses, which is a highly peculiar phenomenon. Additionally, we have a relatively recent report from a scientific perspective on the genetics of this trait among these populations, Joseph Birdsell's Microevolutionary Patterns in Aboriginal Australia: A Gradient Analysis of Clines. The book is from 1993, and no doubt most of the research was done earlier, so the techniques and analyses may seem a bit crude to us. Birdsell observed that the inheritance pattern of blonde hair among the desert Aboriginals exhibited "incomplete dominance." He recorded that the frequency of the trait was rather high within these tribes, at least for children and women. Additionally, he observes that people with an eastern Aboriginal parent and European parent usually had brown hair of various shades. But among individuals who had one blonde (at least as a child) desert Aboriginal parent and a European parent the offspring tended to be disproportionately blonde, even if the European parent was a brunette! Finally, he observed that aside from head hair, only the body hair of the forearm was blonde. The rest was dark in these Aboriginals. From what I can tell Birdsell's monograph is the only recent scientific exploration of this particular topic of blondism among the peoples of Oceania. Many physical anthropologists record the observation of non-black hair among these peoples, but for most their interest did not go beyond cataloging the fact, or it was an incidental result in a bigger project. There's still a lot about human variation we don't know. In regards to human pigmentation most of the puzzle has been completed. This is one piece which remains to be found. Addendum: Some work on the pigmentation genetics of Melanesian populations has been done. They resemble Africans more than any other non-African group in their genetic architecture of loci implicated in the variation of pigmentation. That would basically eliminate the European admixture model to my mind to explain light hair, and increase the probability of bleaching and/or a different and unknown locus. Note: Blondism among North African, Middle Eastern, Central and South Asian populations is I believe either simply part of the natural continuum of West Eurasians, or, admixture from Europeans or other blonder groups. I believe that this is even the source of blondism among groups like the Hmong, who have a legend of migration from deeper in Asia, where they may have mixed with West Eurasian populations on the fringes of China proper. Related:Blondism in Melanesia. * The highest peak in New Guinea is ~14,000 feet above sea level, and in the higher reaches of the uplands it snows periodically. Image Credit: Wikimedia