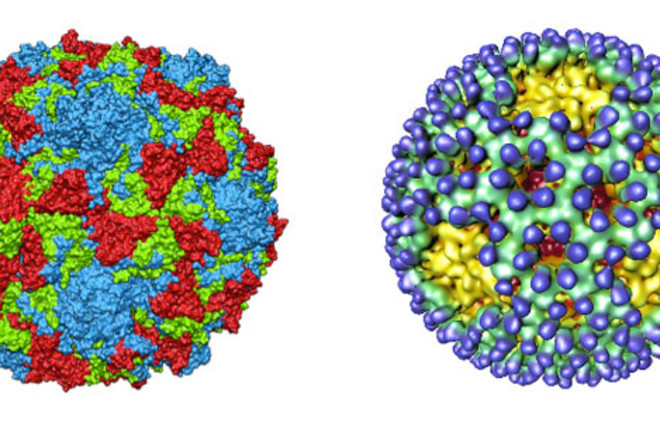 Our body is home to a hundred trillion bacteria. There are ten of them for every one of our own cells. These residents, collectively known as the microbiome, are found throughout our bodies but the biggest populations live in our guts. They act like a hidden organ, which manufactures nutrients that we cannot produce, harvests energy from our food, and suppresses the growth of harmful bacteria that would make us ill. They are more than just passengers – they are our partners in life.

But they can be turned against us. Two new studies in mice have found that viruses can exploit gut bacteria to gain a foothold in our bodies and evade our immune systems. Our microscopic allies can turn into unwitting collaborators for dangerous infections.

The virus that causes polio is one of them. Before infecting the nervous system and causing paralysis, poliovirus first stakes its claim in the gut, and it relies on the local bacteria to do so. Sharon Kuss from the University of Texas Southwestern Medical Center managed to protect mice from the virus by first treating them with antibiotics, which reduced the number of bacteria in their guts by a million times. As a result, twice as many of the mice survived a bout of poliovirus. If Kuss reintroduced the bacteria, the virus bounced back, and more mice died.

Poliovirus attaches itself to large molecules like lipopolysaccharide (LPS), which stud the surface of the bacteria. It grabs onto these molecules like a set of reins, hanging on while it rides the bacteria towards the cells of its host. This contact also changes the virus. It becomes more stable at mammal body temperatures, and sticks more strongly to host cells. In short, it becomes a more effective virus.

Kuss demonstrated this by collecting poliovirus that had spent just two hours in a mouse’s guts. After this brief intestinal stay, it was twice as good at infecting cells compared to viruses that had grown in germ-free intestines or sterile laboratory flasks. And when Kuss exposed the virus to just one type of gut bacterium - Bacillus cereus – it became six times better at infecting human cells.

Meanwhile, Melissa Kane from the University of Chicago found that a second virus from a very different group also depends on gut bacteria. Mouse mammary tumour virus (MMTV) is a retrovirus like HIV, and it causes breast cancer in mice. Mother mice can pass the virus on to their pups via breast milk.

When MMTV first encounters a new host, it relies on the local gut bacteria to help it evade the immune system. When Kane treated pregnant mice with antibiotics, she killed off most of their gut bacteria. Babies get their first bacteria from their mothers, so pups that are born to sterile mums also tend to be microbe-free. And Kane found that these pups could resist MMTV, even if they suckled on milk that was loaded with the virus. Without gut bacteria, the mice couldn’t transmit the virus to their young, and they regained that ability when Kane restored their microbiome.

As with poliovirus, MMTV sticks to the LPS molecule on the surface of gut bacteria. Kane thinks that it collects fragments of LPS that have dislodged from gut bacteria and are floating around the gut. LPS triggers the production of a chemical called interleukin-10, which tells the immune system to stand down. Gut bacteria use LPS as a backstage pass – it allows them to wander about their hosts without being attacked by security. By stealing this pass, MMTV can gain safe passage too.

LPS is common to a wide variety of gut bacteria, so the viruses aren’t reliant on any given species. They don’t even need living bacteria; dead ones still have the right molecules.

It’s likely that many more viruses use the same tactics. MMTV and poliovirus belong to very different families and Kuss has already found that reovirus, a member of yet another group, also exploits the microbiome. This strategy isn’t limited to viruses either. Last year, Kelly Hayes found that a parasitic worm uses gut bacteria to evade a mouse’s immune system, much like MMTV does.

These studies complicate our understanding of the communities inside us. They are undoubtedly helpful. They can safeguard our health by keeping harmful bacteria at bay. In one study, subsistence farmers in Burkina Faso had more diverse gut bacteria than European city-dwellers, and they also had fewer food poisoning bacteria, despite their poorer sanitation. On the flipside, the microbiome can also aid and abet viruses and parasites. However, Julie Pfeiffer, who led the poliovirus study, says, “The gut microbiota do far more good than harm for the host.”

On the surface, it seems like you could treat viral infections with antibiotics, contrary to popular health advice. However, that’s not the case. Both groups used very high concentrations of many potent antibiotics, delivered for a week, to rob their mice of their microbiome. Considering that most viral gut infections are mild and short-lived, treating them like this would be like swatting a gnat with a nuke.

The antibiotics would also indiscriminately kill your microbiome, greatly reducing its diversity in a long-lasting, if not permanent way. Without their protection, you would run the risk of some truly severe bacterial infections. “For me, I'd be happier with a mild gut virus infection. I like my microflora just the way they are, and I avoid antibiotics unless they are absolutely necessary,” says Pfeiffer.

There is one exception. The polio vaccine contains living but weakened viruses. Most people easily develop immunity to these feeble viruses and clear them within a week. But a very small proportion of people cannot. They fail to make the right antibodies and the viruses continue to reproduce inside them for years or decades, risking paralysis. These very rare people might benefit from an intense treatment of antibiotics that would stop the virus from reproducing in their intestines.

That’s the brute-force approach. A more subtle strategy would be to find exactly how the viruses are using the bacteria and design drugs that can stop those interactions. That’s something that both teams are now working on.

An introduction to the microbiome