I'm featured in the latest issue of Symmetry magazine which hit the bookstands a couple weeks ago. Alas, not for my groundbreaking work on signatures for extra dimensions in high energy accelerators. But for something more on the human side â€" my collection of Christmas ornaments. No, I am not joking! Symmetry excels in not only covering the exciting science that we do, but also in illustrating that us scientists are people too. When the editor asked if they could do the feature, my first thought was how did they even know about my Christmas ornaments? You gotta admit â€" that's fairly obscure. Then I was reminded of a common friend who had Christmas dinner at my house almost a decade ago....that's a phenomenal memory on her part! Everyone at SLAC has had fun with the article. Numerous people have stopped by my office and related their own Christmas ornament story (who knew people even had Christmas ornament stories?). Helen Quinn got the wrong box from relatives by mistake once and ended up with a perfectly dreadful set of plastic ice skaters. Burt Richter's wife is an avid ornament collector and seems to have an overly large accumulation for their new smaller residence. So exactly what is the deal with my Christmas ornaments? Turns out I buy one every time I visit a new place - and I mean every time I visit a new place. Something that reminds me of the place and the time I spent there. I started this as a grad student, so it's clear that this is a hobby that doesn't cost much. Sometimes I make do with a kitschy keychain and cut the chain off (my favorite of this ilk is a tiny Corcovado from Rio). As CV readers know, us scientists are frequent travelers, and this is my way of keeping track of where all I've been. For example, last week I was at the Aspen winter conference â€" and bought a nice hand-painted egg-shaped ornament with a winter Aspen scene. Last summer I was in Cologne, and bought a small beer mug thing. You get the picture. I have enough at this point to cover at least two Christmas trees, but that doesn't stop me, the collector! Back to the Symmetry article... I brought some of my favorite ornaments in and we had a photo shoot (no, I am still not kidding). Here's the winning shot and the nicely penned piece by Jennier Yauck (billed as Ornaments Highlight Physics Conferences): 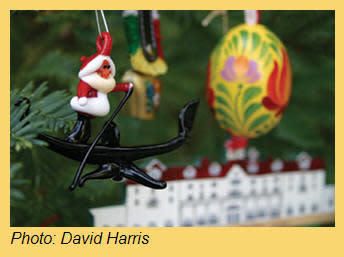 O Christmas Tree! Like many particle physicists, JoAnne Hewett can trace the course of her career through her scientific publications. But for a more colorful retrospective of her work, the SLAC theorist simply decorates her Christmas tree. About 20 years ago, Hewett, a graduate student at the time, bought a totem-pole keychain while visiting a collaborator in Vancouver. Shortly after, a sort of eureka moment struck: "I thought, hey, I could use this as a Christmas ornament," she says. Since then, Hewett has made a habit of collecting tree trinkets whenever she travels to conferences, workshops, committee meetings, and the like. "I look for something that says to me, ahh, this is that place," she says. Indeed, Hewett can tell you with enviable recall the placeâ€"as well as the year and eventâ€"each ornament represents. The hand-painted egg? Budapest, 1991, Beyond the Standard Model workshop. The cactus? Tucson, 2003, supersymmetry conference. The glass Santa in a gondola? Trieste, 2006, presentation of LHC lectures. And then there's the poorly crafted half-sphere diorama that's stuffed with figures vaguely resembling people and cacti. "This is what you end up with when you've had too many margaritas," Hewett laughs. San Diego, 1989, 4th generation physics meeting. Most every ornament comes with a story, too, but clearly, the story that takes the holiday fruitcake belongs to the ornament shaped like the Stanley Hotel, where Hewett attended a linear collider meeting in 1995. Located in Estes Park, Colorado, the hotel is famous as the set for the thriller movie, The Shining. But what Hewett remembers most about the hotel is its run-down condition at the time. "We had no hot water or curtains, and the meeting was in a shack in the back yard with only two bathrooms for all of us. It was absolutely awful," she says. "When I saw the hotel ornament, I knew I had to have it." And of course, there's one other ornament Hewett always knew she had to have in her collection, too: a miniature cowbell. "Every physicist who's ever been to CERN has seen one," she says with a smile.