Behind the TIME Cover: Most Human Societies Don't Get Our Breastfeeding Hang-up

Eric Michael Johnson has a master’s degree in evolutionary anthropology focusing on great ape behavioral ecology. He is currently a doctoral student in the history of science at University of British Columbia looking at the interplay between evolutionary biology and politics. He blogs at The Primate Diaries at Scientific American, where this post originally appeared. 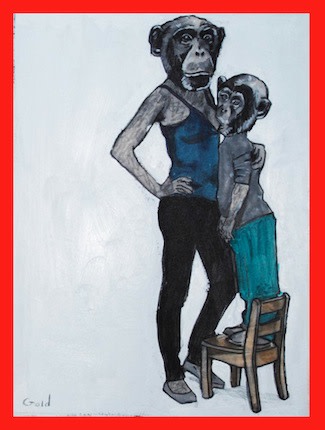 “Attachment (with respect to Martin Schoeller),” by Nathaniel Gold

My son will be 3 years old next month and is still breastfeeding. In other words, he is a typical primate. However, when I tell most people about this the reactions I receive run the gamut from mild confusion to serious discomfort. Their concerns are usually that extended breastfeeding could be stunting his independence and emotional development–the “Linus Blanket Syndrome” in the words of Michael Zollicoffer, a pediatrician at the Herman & Walter Samuelson Children’s Hospital at Sinai Hospital in Baltimore. Worse yet, they hint that it might even cause“destructive” psychosexual problems that he will be burdened with throughout his adult life. Could they be right? Was our choice “a prescription for psychological disaster” as Fox News psychiatrist Keith Ablow wrote in response to TIME magazine’s provocative cover article on attachment parenting? Just when is the natural age to stop breastfeeding?

One thing I’ve learned in my research on human evolution is that people are quick to assume that what they do is “natural” simply because they don’t know of other examples where things are done differently. The primate brain is a pattern recognition machine and is adapted to quickly identify regularities in our environment. But when we are presented with the same pattern over and over again it is easy to fall victim to what is known as confirmation bias, or coming to false conclusions because the evidence we use does not come from a broad enough sample. In order to avoid falling for this bias on the question of extended breastfeeding the best way forward would be to draw from the largest sample possible: the entire primate lineage.

In their classic paper, “Life History Variation in Primates” published in the premier scientific journal Evolution, the British zoologists Paul H. Harvey at Oxford and Tim Clutton-Brock at Cambridge published the most comprehensive data then available on the world’s primates. The variables they measured included everything from litter size and age at weaning to adult female body weight and length of the estrous cycle among 135 primate species (including humans). By analyzing the relationships between these variables, using a statistical approach known as a regression analysis, they identified striking patterns that held across primate taxa.

One especially strong correlation was that adult female body weight was closely tied to their offspring’s weaning age, so much so that knowing the first would allow you to predict the second with a 91% success rate. As a result, as anthropologist Katherine A. Dettwyler has shown in her book Breastfeeding: Biocultural Perspectives (co-edited with Patricia Stuart-Macadam), it can be calculated that a young primate’s weaning age in days is equal to 2.71 times their mother’s body weight in grams to the 0.56 power. This calculation predicts, given the range of female body sizes around the world from the !Kung-San of South Africa to the Arctic Inuit, that humans should have an average weaning age of between 2.8 and 3.7 years old.

How well does this prediction hold for our species? According to data compiled by UNICEF, half of the world’s population continues breastfeeding until at least the age of two. Furthermore, weaning in these cases doesn’t mean the total cessation of breastfeeding. It simply means the introduction of solid foods, with supplemental breastfeeding continuing for months or even years. However, these statistics are all drawn from sedentary, agricultural societies that have at least some contact with modern trends in child development. What about those societies whose way of life is most like that of our Pleistocene ancestors?

To answer this question Yale University anthropologist Clellan Stearns Ford utilized the largest historical collection of anthropological data available, the Human Relations Area Files, and analyzed the weaning age of 64 non-Western “traditional” societies–small-scale horticultural and hunter-gatherer populations. His analysis (see Figure 1 below) determined that the average age of weaning is approximately three years old, just as Harvey and Clutton-Brock’s data predicted. Furthermore, because these traditional societies are dispersed throughout the globe and have no contact with one another (or often anyone except the visiting anthropologists) these societies offer a broad enough sample size to avoid the problem of confirmation bias. 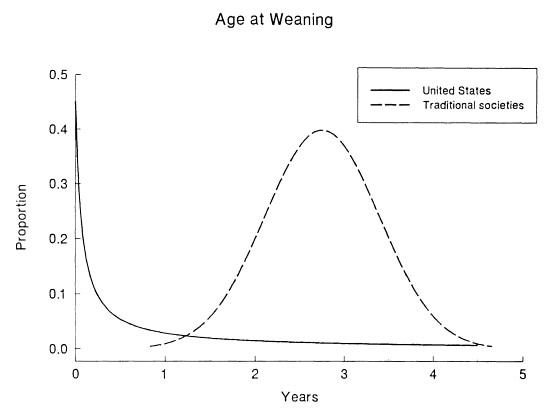 A comparison of age at weaning in the United States and in 64 traditional societies, reproduced from Stuart-Macadam & Dettwyler (1995)

“Regardless of ecology,” write anthropologist Barry Hewlett and psychologist Michael Lamb in their book Hunter-gatherer Childhoods, “hunting and gathering groups are characterized by frequent and extended breastfeeding and extraordinarily high levels of parent-child physical contact and proximity.”

In contrast to these global trends among traditional societies and non-Western countries, U.S. government data estimates that fewer than 15% of Americans continue nursing their infants after they are just six months old (while Canadians are slightly higher with an average of about 25%). Likewise, as detailed by the Organisation for Economic Co-operation and Development Family Database [PDF], most countries in Western Europe cluster in the same 15-25% range as those in North America.

The worldwide trends therefore seem to be relatively straightforward: most humans tend to wean at a similar stage in their life history as other primates, which works out to about three years old based on our relatively large body size. This weaning age can then be adjusted based on the environment or traditions in a particular culture. However, Western nations appear to be an outlier to what is otherwise a natural behavior for our species. On this point the World Health Organization and UNICEF are in line with the predictions from primate life history. Both global health organizations recommend the following:

The benefits of extended breastfeeding have been demonstrated both in the less developed and the industrialized world. For example, research carried out in Burkina Faso by epidemiologist Simon Cousins for the Bulletin of the World Health Organization and in Washington, DC by Dr. Kathleen M. Buckley for the Journal of Human Lactation, both showed that extended breastfeeding until three years old resulted in lower rates of malnutrition compared to those who were not breastfed as long.

Longer duration of breastfeeding has also been shown to significantly improve a child’s immune response to infectious disease. Writing in the British Medical Journal, Kåre Mølbak and colleagues at the University of Copenhagen analyzed the incidence of diarrhea in weaned and partially breastfed children in the West African Republic of Guinea-Bissau. They determined that not only did breastfed children get sick less often than weaned children, but those who continued partial breastfeeding up until the age of three had the lowest rate of infection. As the authors concluded:

Identical results were found in rural East Bhutan by Erik Bøhler and colleagues from the Department of International Health in Oslo, Norway, as reported in the journal Acta Paediatrica.

“Breastfeeding between 12 and 36 months of age was associated with reduced risk of diarrhea,” wrote the authors. “Breastfed children also gained significantly more weight during the monsoon season, and breastfeeding protected children against weight loss due to diarrhea.”

The unusually low level of breastfeeding in the United States therefore has public health implications rather than simply being a lifestyle choice. Ultimately, mothers–as well as fathers–need to decide for themselves how much, or how little, breastfeeding they are comfortable with. However, as a society, we can support their choices by making sure that everyone has access to reliable information and by creating a positive environment so that breastfeeding mothers aren’t subject to social stigmas or value judgements for doing what, after all, is only natural.