Bear Attack Alert: It’s the Papas, Not the Mamas, You Should Watch Out For 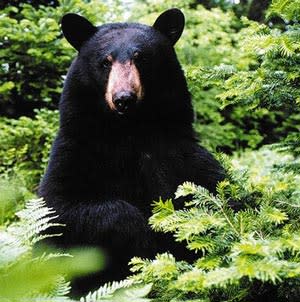 If you’ve ever woken to find your campsite a disaster and your garbage being nosed through by an ursine invader, you’ve probably remembered the old bear-safety adage: don’t get between a mama bear and her cub. Bears will generally leave you alone, goes the old saw, as long as you don’t threaten their young. But it turns out mama bears aren’t the problem. It’s the papa bears. In a survey of all the black bear attacks in North America over the last 110 years

, scientists have found that 88% of the bears involved were in hunting mode. And 92% of those predatory bears were males. So while it’s probably still not a good idea to scoop up and cuddle a cub, the researchers suggest that being able to tell whether a bear is being predatory and then fighting back (?!) might be a better move than keeping an eye out for a baby. "With training, people can learn to recognize the behavior of a bear that is considering them as prey and deter an attack by taking aggressive action," says the lead researcher in a release. How to tell when a bear thinks you’re lunch, and how you should fight back, are not revealed in the article, but the lead researcher told the NYTimes

“Mother bears, whenever they feel threatened or a person is too close, they act very aggressively,” said Stephen Herrero, the study’s lead author. “They make noise, they swat the ground with their paws and they run at people. They want to make you think that they’ll eat you alive, but they almost always stop.” By contrast, “the kind of bear you need to be afraid of is not feeling threatened by you — it’s testing you out as a possible prey item,” said Dr. Herrero, a professor emeritus at the University of Calgary. “It’s quiet. It stalks you just like a lion might stalk you.” With a mother defending cubs, “you just back away calmly and give it some space,” Dr. Herrero said. “With a predatory bear, you stand your ground, stomp at it, throw rocks at it, whatever you need to do to convince it you’re not easy prey.”

That’s all fine and good if you're a wildlife biologist, but what about the rest of us, who might not be sure of difference between predatory and not? Time for some updated fireside educational programs, park rangers. If all this talk of stalking makes you nervous, take comfort in the fact that there have been very, very few black bear attacks—only 63 people have died between 1900 and 2009—considering that humans interact with the bears millions of times each year (this species is by far the most common bear on the continent). And the study verified a number of other pieces of bear wisdom: groups of two of more are rarely attacked, bears who’ve killed before are more likely to kill again, and increasing human populations mean a higher risk of fatal bear attacks, perhaps because the bears are feeling crowded out. Image credit: styro/flickr