Bacteria-Killing Phages Could Be an Alternative to Antibiotics

A scientific renaissance for phage therapy, virtually unheard of in the West, is underway. 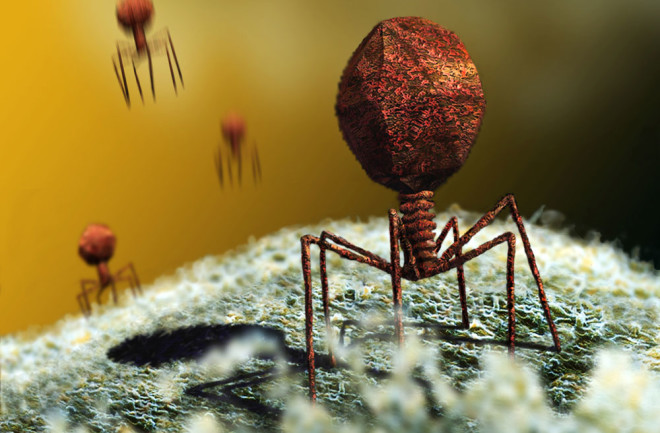 A phage is a type of virus that attacks and infiltrates bacteria. In this digital rendering, T-bacteriophages are on the attack, injecting their genetic material into the bacteria. Karsten Schneider/Science Sourc

It was a guerrilla assault worthy of the takedown of Osama bin Laden. But in this case, the assassins were intrepid viral invaders. In Andrew Camilli’s molecular biology lab at Tufts University in Boston, researchers found the telltale footprints of a startling attack against cholera, a deadly bacterial disease. They were analyzing the DNA sequences of tiny viruses called bacteriophages (literally, “bacteria eaters”) lurking in the stool samples of cholera patients. The phages’ DNA contained some of the genes from another bacteria’s immune system. Somehow, the tiny phages sneaked in and overpowered the much larger cholera cells, using a big chunk of this stolen immune system.

“We were surprised because it’s the first known example of any virus that has captured and commandeered [an] immune system,” says Camilli. “The phages clearly have gained the upper hand, and studying how they do it can eventually open the door for treating cholera with phages.”

Camilli’s research is part of a scientific renaissance into phage therapy, virtually unheard of in the West. Early in the 20th century, doctors worldwide used these bacteria-eating viruses to fight dysentery and other dangerous pathogens, only to abandon them after more effective antibiotics emerged. But today, researchers are turning to phages because antibiotics are losing their punch.

The comeback of antibiotic-resistant infections “would dramatically alter the practice of medicine,” says microbiologist Alexander Sulakvelidze, a phage expert at the Emerging Pathogens Institute at the University of Florida in Gainesville.

Without a way to manage infections, surgeries ranging from simple procedures to complex organ transplants would become risky, he explains: “You have a very real and alarming possibility that patients will either die or will develop complications.” Many researchers believe it’s time to look beyond antibiotics.

Bacteriophages, about 100 times smaller than bacteria, are the most abundant life forms on Earth, inhabiting water, plants, sewage and our digestive tract. They do their dirty work by infiltrating bacteria, including disease-causing germs, and destroying them from within: After latching onto bacteria, the phages bore inside and hijack the bacteria’s genetic machinery, turning them into phage factories that eventually make so many copies that the cells burst, killing off the host.

But the phages can be finicky and unpredictable. Each strain of phage is highly targeted and has evolved to home in on specific bacteria, which means a precise match between prey and predator is necessary for any phage-based treatment to be effective. At first, in the 1920s and ’30s, doctors didn’t know about this specificity, so sometimes the preparations worked, and sometimes they didn’t. Also, people occasionally became sick after ingesting the tiny microbes because the treatments weren’t purified properly. Western physicians discarded them once the more reliable antibiotics became widely available after World War II.

A tiny phage attacks an E. coli cell in this false-color image from a transmission electron microscope. Eye of Science/Science Source

However, Soviet scientists figured out how to make phages more effective — advances in molecular biology techniques allowed biologists to identify better matches between phages and their intended prey — although their less rigorous studies in Russian journals were ignored by cold warriors in the West.

Phages are still routinely used in Eastern Europe and, more recently, in Asia. The muddy-looking serums are often sold over the counter in glass vials and dabbed on wounds or taken orally. A handful of desperate Americans — struggling with treatment-resistant infections, diabetic ulcers or other chronic wounds — have journeyed to a clinic in Tbilisi, Georgia, for the “phage miracle cure.”

“I have used phages — almost everyone I know has used phages,” says Sulakvelidze, who was a rising scientific star in his native Georgia and became a director of the then-republic’s version of the Centers for Disease Control and Prevention at age 27. He conducted phage research until the collapse of the Soviet Union in 1991. Twenty years ago, when he arrived in the U.S. as a postdoctoral fellow at the University of Maryland, he was shocked to find that this therapy was virtually unknown here. But the tremendous progress in phage research of the past 10 years and the urgency to find alternatives to antibiotics have made physicians more willing to look into phages, he says.

In 1998, Sulakvelidze helped found the biotech company Intralytix, which has successfully devised a number of food safety products, including a spray that uses phages to eradicate Listeria, Salmonella and E. coli in foods before they reach stores. “When we first formed, people would simply laugh at us, and told us there is no way this can be commercialized,” says Sulakvelidze. “It took a long time — more than four years to get our first product approved — but it did happen.”

Along with other scientists, he now focuses on human cures. He’s currently working with the U.S. Army’s Research Office on a project to fight shigellosis, a form of dysentery that kills almost a million people a year, mostly young children.

Preliminary studies show phages are effective in fighting antibiotic-resistant ear infections and chronic ulcers, and some researchers suspect they might work on acne outbreaks. Phages even neutralized the deadly MRSA (methicillin-resistant Staphylococcus aureus) superbugs that are resistant to most antibiotics and have become a serious problem in hospitals, nursing homes and intensive care units. “The food safety preparations, the possible acne treatment, these are all potential icebreakers — incremental steps toward acceptance of phage therapeutics,” says Graham Hatfull, a biology professor and co-director of the University of Pittsburgh Bacteriophage Institute.

On other fronts, Camilli’s lab is busily figuring out how the cholera-fighting phages — called ICP1 — did their genetic sleight of hand. Researchers aren’t sure how these tiny viruses got a chunk of DNA from a bacterium’s immune system, but they’re looking into how the viruses transformed this adaptive immune system into a weapon against the deadly pathogens. “We don’t know how this happens, although we do have some clues,” says Camilli. Unraveling the underlying mechanism could help pave the way toward making phages a targeted therapy for diseases like cholera.

Still, numerous stumbling blocks remain before phages could become part of our infectious disease arsenal. To gain regulatory approval, a drug is normally tested in costly large-scale trials encompassing a large number of people — with about half getting a placebo, or dummy pill — to prove the treatment actually works. But since phages need to be targeted to specific bacteria to be effective, mixing and matching phage preparations to fight infectious disease outbreaks isn’t optimal for the one-size-fits-all approach that regulatory agencies like the FDA require for marketing approval. In contrast, antibiotics kill off a broad spectrum of bacteria, making them easy to test in standard clinical trials.

Phages would require a less traditional approach to get official approval, such as the annual process for influenza vaccines in which manufacturers secure approval of new formulas based on the flu bug that is going around that year, instead of conducting big clinical trials every time. Big Pharma is also leery of investing millions in the capricious microbes. The key question, Hatfull says, is when do we hit the turning point?

“How bad does antibiotic resistance have to become that it initiates a full-blown global initiative and we relax regulatory procedures? We haven’t quite gotten there yet — but when we do, phages will be waiting in the wings.”

The widespread use of phages to kill foodborne pathogens may help overcome regulatory reluctance to phage therapy. Out of nearly 48 million cases of foodborne illnesses every year, 128,000 result in hospitalizations and more than 3,000 result in deaths in the U.S. alone, according to the Centers for Disease Control and Prevention. In 2006, Intralytix secured FDA approval for ListShield, a cocktail of six phages that is sprayed onto ready-to-eat meat and poultry (like you’d find at the deli counter) to control Listeria, which can cause a serious infection (Listeriosis) that has a 20 percent fatality rate.

In 2011 the company received clearance for EcoShield, a spray for red meat to combat Escherichia coli O157:H7 (the culprit behind nearly 62,000 foodborne illnesses every year) and in 2013, for SalmoFresh, which targets foods at high risk for Salmonella, such as red meat and poultry. In a 2009 study, researchers from the U.S. Department of Agriculture used EcoShield on fresh-cut lettuce and cantaloupe and found it reduces levels of E. coli to 100 times less within a day.

“As a food safety tool, phages have great potential to reduce bacterial contamination,” says study co-author Manan Sharma, a microbiologist with the USDA in Beltsville, Md. “Because phages are so present in the environment, it doesn’t seem to be a stretch to take something that is already present in food and reapply them in a more targeted way and get the food safety benefit.”

[This article originally appeared in print as "Infections Infected."]