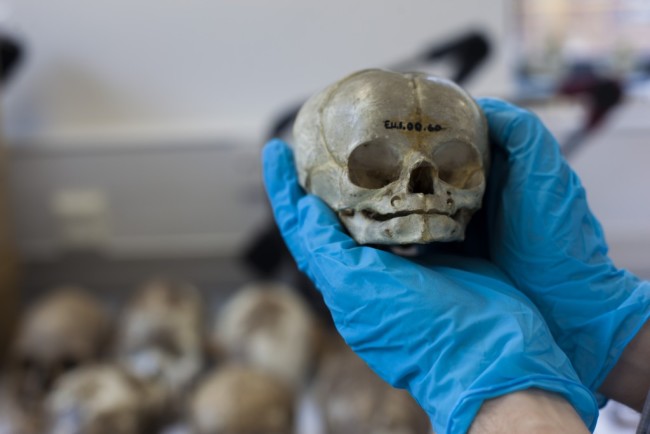 A study of 54 dead babies was not all bad news. In the Journal of Anatomy, University of Cambridge biological anthropologists reported on fetal and infant cadavers, dissected by anatomists between 1768-1913 and now stored in the university’s collections. The study found that child cadavers were both more common than previously thought and handled differently than adults, reflecting their importance in medical education. In order to understand childhood health and development, “at some point in history someone has to work out what children are made of,” said coauthor of the study Dr. Piers Mitchell, a children’s orthopedic surgeon and academic. “And the way to do it was to dissect children.” However, there was little historical or archaeological evidence for the use of children in anatomy classes when Mitchell began the study with coauthor and doctoral student Jenna Dittmar. After their investigation, the pair concluded that child cadavers are missing from medical history due to the field’s focus on adult men as well as socio-political views of dissection at the time. And as for the archaeologists, they were looking for the wrong signs of dissection when it came to child skeletons. Black Market of Body Snatchers As the article states, “within the context of medical education men played all the roles; educator, dissector and dissected.” Most cadavers were adult men because laws in 18^th and 19^th century England made it difficult for medical schools to get anyone else. With the Murder Act of 1752, anatomists were only permitted to dissect bodies of executed murderers—and it was done publicly for “added insult,” says Mitchell. Most murderers were adult men, and those men were not enough. The study reports data that an average of 77 people were executed per year in the early 1800s in Britain, but the Schools of Anatomy in London were dissecting 450-500 bodies per year. The deficit was supplied by a black market of body snatchers, or resurrectionists, who dug up bodies from graveyards and stole them from coffins before funerals. Even on the black market, however, child cadavers—or “smalls” in resurrectionist lingo—were rare because the bodies were priced by the inch. Anatomists acquired much-needed child cadavers through a combination of black market body snatching, child deaths in charitable hospitals and poor families, and infanticides of illegitimate babies by desperate, unwed women. But they got them, and they “were really important to help doctors throughout the generations, to keep more children alive,” explains Mitchell. Missing Marks for Archaeologists The study also found that child cadavers were treated differently than adult cadavers, and therefore lack the typical marks that archaeologists use to identify skeletons that have been dissected. “Archaeologists have missed the evidence,” says Mitchell. While most adults underwent craniotomy, or opening of the skull, by saw, “only about one out of 50 of these kids had their skulls cut open,” says Mitchell Similarly, in order to expose the internal organs, adult chests were opened by cutting apart the ribs and sternum bones. Children were handled more delicately, by cutting the soft cartilage portion of ribs. Overall, more fine tools—knives and soft brushes—were used to dissect children. Recognizing the tools and techniques of child dissection allowed Mitchell and Dittmar to establish “firm criteria for archaeologists to identify,” says Mitchell. Lastly, child cadavers were kept in collections for future study, while adults were typically buried. Child bodies were preferred for special preparations that injected the bodies with colored wax to highlight the nervous and circulatory systems. “All this clearly shows that the anatomists were trying to look after the skeletons of children,” said Mitchell.

Planet EarthThe Pyramid of Djoser: The World's Oldest Pyramid Is Often Overshadowed
Recommendations From Our Store