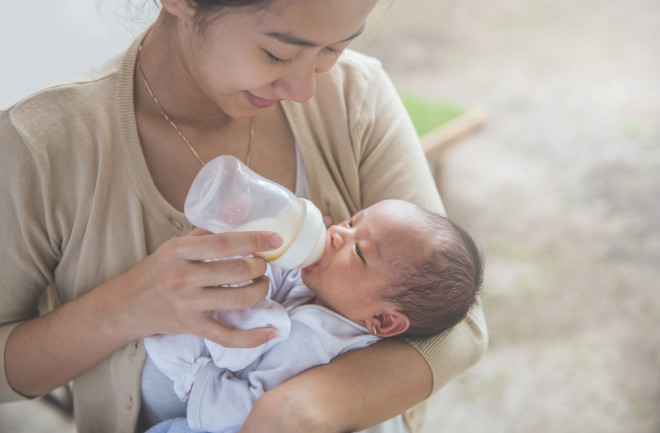 A human’s genes are laid down at conception. A fetus’ heart, brain and other organs start to form five weeks later. At six months, an unborn child has most of its body parts. But there is one essential component missing: the helpful bacteria, often referred to as the microbiome, that will inhabit its gut, skin and other organs.

Our first interactions with microbes set the stage for health throughout our lives. Babies’ microbiomes have been linked to healthy brain development, asthma, allergies, obesity and more. But when and where do these earliest encounters occur? Understanding where our microbiomes originate is as important as knowing our genetic risk of cancer or heart disease.

“We always think about inherited risk in terms of human genes,” says microbiologist Susan Lynch of the University of California, San Francisco. “But there’s also a set of microbial genes that’s acquired very early in life. It comes from Mom, but it’s not clear yet how and when it gets to the baby.”

For nearly a century, the human womb and the baby within were thought to be bacteria-free. The first hints otherwise emerged nearly a decade ago, when researchers began to discover that placentas from pre-term babies showed signs of bacteria. Scientists have since spent years seeking microbes in the womb. It’s an enduring quest—and it’s led to a lively debate among researchers.

Just last month, researchers from the University of Cambridge added further fuel to the dispute when they scanned more than 500 placentas and found no evidence of bacterial DNA. They suggest that older studies were simply detecting experimental contaminants and the womb is, in fact, sterile.

But the researchers may have just interpreted the data differently, says Kjersti Aagaard, a maternal-fetal medicine specialist at Baylor College of Medicine in Texas. She thinks they simply labeled some DNA sequences as contaminants rather than colonizers, leading them to conclude that no bacteria live in the placenta. Aagaard was among the first to report bacterial DNA in the placenta.

The debate on where a baby meets microbes for the first time isn’t settled. But the story of how our first microbiomes are shaped — and how they shape us for life — is becoming clearer.

Primed in the Womb?

Why microbes might be present in the placenta or the fetus is still a mystery. Researchers who have found evidence for them there have detected only low levels of microbial DNA, or cultured a few specimens in the lab. It’s unclear whether the bacteria are alive within the womb. But even a few microbes might boost a developing fetus’ immune system, Aagaard says.

For example, a group of researchers from Singapore reported in 2017 that immune cells from 17-week-old fetuses were primed to respond to telltale microbial chemicals. It was a sign that their immune systems had already encountered these molecules, either from microbes themselves or from their mother’s cells.

Early interactions with bacteria might have big consequences down the road. The ability to harbor harmless, beneficial microbes — and tell them apart from pathogens — is “fundamentally important” to building microbiomes throughout our body, Aagaard says..

Bacteria flood babies’ bodies the instant they enter the world. These microbes vary depending on whether a child is delivered vaginally or via a Cesarean section. Some researchers have linked the microbiome of babies delivered by C-sections to higher risks of asthma, celiac disease or allergies. Others report these differences vanish within the first few months of life. “It’s still being debated how much of an effect there is, or how consistent the differences are,” says evolutionary biologist Andrew Moeller of Cornell University.

Nonetheless, the distinct starter packs of microbes babies get from their mothers lay the foundation for the developing microbiome. “The first organisms to colonize a pristine environment can strongly influence the conditions in that environment,” Lynch explains. “That in turn shapes the accumulation of other species.”

She found that in four-week-old babies, these founder microbes can predict whether a baby faces a higher risk of asthma. The gut microbiome of high-risk babies is not just missing certain bacterial species, “it’s a different metabolic machine,” Lynch says.

When these babies were given a strain of probiotic bacteria until they were six months old, their microbiomes became more like those of infants with a low risk of asthma. But their microbiomes reverted to their previous state if the treatment was stopped.

This resistance to change might be because of exposures to microbial chemicals earlier in life, Lynch suggests. “Microbial or immune priming before birth may be a critical determinant of which organisms actually colonize the developing gut microbiome after birth.”

Once out in the world, infants’ gut microbiomes are tailored to help them digest milk or formula. Their microbiome changes as a baby eats and interacts with its surroundings: mouthing toys, cuddling puppies or wrestling with siblings. “The microbes that end up in the body come from these environmental sources,” Moeller says. “Without that, there’s really nothing to shape by diet.”

A child’s microbiome stabilizes within the first two or three years of life, acquiring groups of bacteria that can persist for decades. But they can also gain new residents. In 2018, researchers found that when a group of five adults and two children visited a Venezuelan village for two weeks, the children’s microbes changed more significantly than those of the visiting adults.

Adult microbiomes change, albeit less drastically, in response to exercise, immigration, antibiotics or a slew of other factors. It might seem like birth—and even the womb—determine our lifelong gut ecosystems. But the ecosystems cultivated on those foundations can be modified by our choices and circumstances. “It’s not all down to those primary colonizers,” Lynch says. “That’s what is most exciting about this field — you can be the curator of your own microbiome."