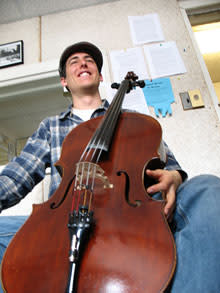 A doctor in Britain has finally revealed a medical hoax that she and her husband started 34 years ago. In 1974, after reading a letter in the British Medical Journal (BMJ) describing a painful condition known as "guitar nipple," Elaine Murphy and her husband John sent in a spoof letter describing an analogous condition they called "cello scrotum." Much as "guitar nipple" was caused by the edge of the guitar constantly pressing against the breast, "cello scrotum" was supposedly caused by the edge of the instrument pressing against a more intimate area of male cellists. Of course, anyone who has ever seen a cello being played would realize the impossibility of "cello scrotum." Although the Murphys were hoping only for some laughs—perhaps assuming that the satire would be evident—BMJ actually published their letter in complete seriousness. The Murphys left their prank uncorrected until an article published in BMJ last month, entitled "A Symphony of Maladies," cited Murphy's letter. This moved the Murphys to finally set the record straight. They recently sent another letter to BMJconfessing the prank and putting an end to Scrotum-gate. The original letter read:

Sir, Though I have not come across "guitar nipple" as reported by Dr. P. Curtis, I did once come across a case of "cello scrotum" caused by irritation from the body of the cello. The patient in question was a professional musician and played in rehearsal, practice, or concert for several hours each day. I am, etc., J.M. Murphy.

After trying in vain to track down Dr. P. Curtis, the Murphys believe that "guitar nipple" is also fictitious. Related Content: Discoblog: Health Hazard Alert: Head-Banging May Hurt Your Brain