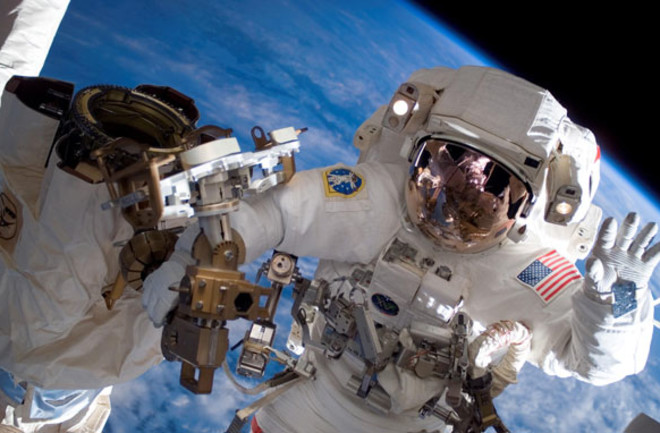 Along with the rest of the criteria that make for a good astronaut--some heavy degrees in science or technology, a tolerance for cramped spaces and freeze-dried food--let's add another one. The ideal astronaut should have narrow hands to prevent his or her fingernails from falling off. National Geographic reports that the design of astronauts' space suit gloves can lead to hand and finger injuries, including an icky condition called fingernail delamination in which the nail completely detaches from the nailbed. While missing nails do grow back in time, if the nail falls off in the middle of a spacewalk it can snag inside the glove, and moisture inside the glove can lead to bacterial or fungal infections in the exposed nailbed. MIT astronautics professor Dava Newman told National Geographic that astronauts take this medical prospect seriously:

For now, the only solutions are to apply protective dressings, keep nails trimmed short—or do some extreme preventative maintenance. "I have heard of a couple people who've removed their fingernails in advance of an EVA," Newman said.

The problem begins when the astronaut's space suit is pressurized for a spacewalk (more technically called an extravehicular activity, or EVA), which makes the flexible fabric of the gloves hard and stiff. Newman

decided to determine how these rigid gloves could make fingernails fall off, and found to her surprise that fingernail delamination was not linked to the length of astronauts' fingers, which would cause more contact between the nails and the glove. Instead, astronauts with wide hands reported losing the most nails on the job. Her study, to be published in a forthcoming issue of the journal Aviation, Space, and Environmental Medicine

, focused on measurements of the metacarpophalangeal joint, where the fingers meet the palm. Peter Homer, who runs the commercial space suit design company Flagsuit LLC

and who has studied astronaut gloves in great detail, told National Geographic

"The bigger the hand is, the more the glove squeezes on [the metacarpophalangeal] joint and cuts off blood flow." Circulation getting repeatedly shut off then restored at the knuckle joint would damage the tissue underneath the fingernail, leading to delamination. It could also explain why so many astronauts have reported that their fingertips get cold during EVAs despite their thermal gloves, Homer said.

Discoblog: Buzz Aldrin Explains: How to Take a Whiz on the Moon