Why do Bruises Turn Yellow, Purple and Green? 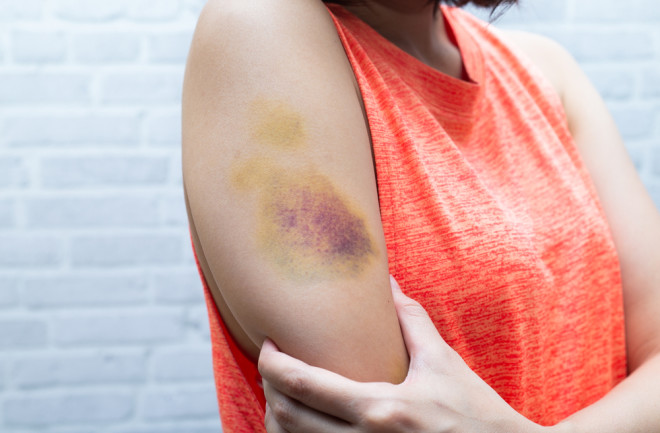 Bruises usually result from trauma to muscle or other tissues just below the skin. The trauma ruptures tiny blood vessels called capillaries, allowing blood to leak into surrounding tissues. The blood is what gives a bruise its initial black-and-blue color. That initial color is influenced by the loss of oxygen from hemoglobin, the molecule in blood that ferries oxygen from the lungs through the body. Oxygen-carrying hemoglobin causes blood to appear bright red, while oxygen-depleted hemoglobin turns blood bluish. In the blood that leaks into tissues after a heavy blow, hemoglobin rapidly loses its oxygen, turning bruises blue or purplish.

As bruises heal, the body breaks down spilled blood cells and their hemoglobin. The iron in hemoglobin is scavenged and reused, usually to form new red blood cells. The rest of the hemoglobin is decomposed into a green pigment called biliverdin, then converted to bilirubin, which is yellow or light brown. These compounds produce the greens, yellows, and browns you see at the end of the healing phase of a bruise — usually days to weeks after the initial trauma. Eventually everything is reabsorbed or excreted by the body, and the bruise disappears. This process occurs at a predictable rate, which allows physicians and forensics specialists to estimate the age of a bruise based on its color.