Cell-sized particles could help with blood clotting in the face of donor shortages. 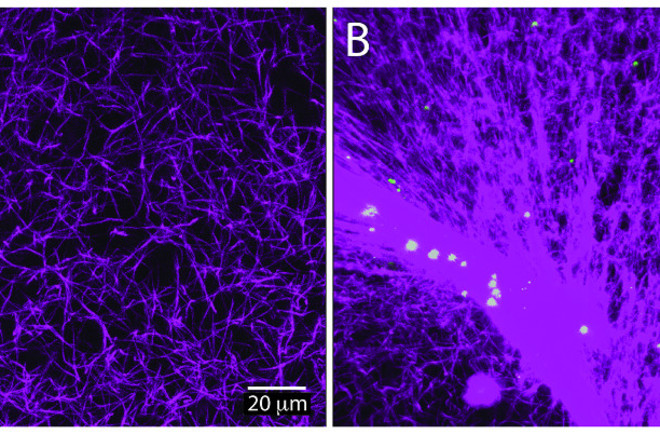 A clot (A) formed with natural platelets on fibrin, shown in purple, and a denser clot (B) formed with added PLPs, shown in white. | Ashley Brown/Georgia Tech

Sign up for our email newsletter for the latest science news
Thomas Barker and Ashley Brown, a research scientist, examine a bacteria plate from their work on PLPs, or platlet-like particles. | Gary Meek/Georgia Tech

On a war-torn street of the future, an American soldier lies sprawled, unsure if a nearby blast has harmed him. Is there internal bleeding? He carries an injector containing artificial platelets, which will augment his body’s normal clotting mechanism and curtail any hemorrhaging. Yet the injection will be harmless if he has escaped injury.

“You don’t want a soldier or medic to stress,” says Thomas Barker, a biomedical engineer at the Georgia Institute of Technology. “ ‘If I inject this, am I causing myself harm?’ We wanted to take the decision out of the hands of the soldier.”

Supported by a U.S. Department of Defense grant, the National Institutes of Health and the American Heart Association, Barker and his team have created what they call platelet-like particles, or PLPs, according to a study published in Nature Materials. Already, the team has successfully tested these particles in lab rats and in miniature tubes of human blood.

The not-quite-cell-size PLPs, gel-like structures consisting mainly of water, circulate innocuously, just like normal platelets. When a wound occurs and clotting begins, tailor-made antibodies on the PLPs’ surface seek out and bind to fibrin, a type of protein that makes up the wound-healing mesh natural platelets fill. In effect, the artificial platelets join forces with the natural ones in making a clot. And if not needed, the PLPs are likely excreted as waste like any other small particle, Barker says.

A clot (A) formed with natural platelets on fibrin, shown in purple, and a denser clot (B) formed with added PLPs, shown in white. | Ashley Brown/Georgia Tech

In emergency room and surgical situations, as on the battlefield, PLPs could prevent someone from bleeding out. But they could also prove useful in cancer treatment centers, where patients frequently need platelet transfusions. Because donated platelets degrade in just five days, they are continually in short supply. Their synthetic substitutes ought to be ready for human trials in about three years, Barker estimates.

[This article originally appeared in print as "Healing Helpers."]