Called "far-UVC," this light is supposed to thwart pathogens like SARS-CoV-2 without harming humans. 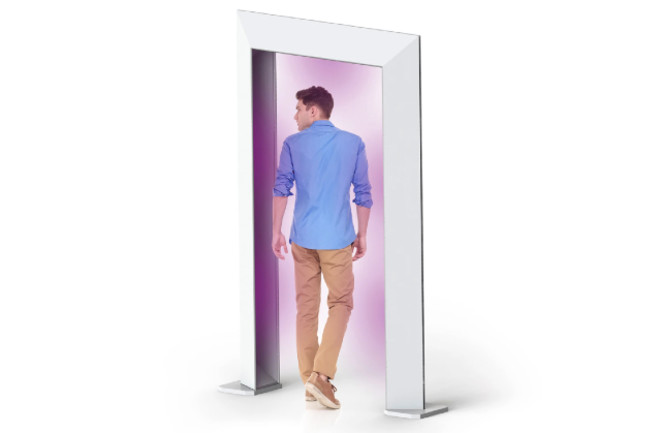 A desperate need for sanitizers has driven people to look for options beyond the spray nozzle. For a couple of bakeries in New York, that means installing experimental lighting in their entryways that is supposed to disinfect pathogens without harming humans.

According to reporting by the New York Post, Magnolia Bakery plans to install lightbulbs that emit “far-UVC” light. For now, the bakery will place a metal detector-like arch — or “portal” — above their doorway that douses patrons in the UV rays. And the bakery told the Post it will replace lightbulbs inside its stores with these special varieties.

The glow cast on bakery customers is the product of years of research at Columbia University. So far, studies show this light does a good job of ruining the genetic material inside some pathogens, such as the H1N1 virus or the bacteria known as MRSA, all while leaving mammal skin cells relatively unharmed.

But the installation of far-UVC lights in the real world has surprised some experts. In March, the FDA released a document allowing UVC disinfectant devices to be used in health care settings during the COVID-19 emergency. However, there doesn’t appear to be any published research on how far-UVC may or may not impact humans exposed for long periods of time — an important step, seeing as other kinds of UV light damage skin and eyes.

“I was quite shocked to see this portal come out,” says Karl Linden, an environmental engineer at the University of Colorado Boulder. Linden has spent decades studying UV light as a way to disinfect surfaces and water, and says that it’s exciting to see increased interest in the sanitation technology. But without long-term studies showing “far-UVC” doesn’t harm people, “my excitement [is] tempered with the concern that it could be an application that could have some dangerous side effects or direct effects.”

Pros and Cons of UV Light

On the electromagnetic spectrum, UV light sits between visible light and X-rays. We can’t see it ourselves, though it is present in sunlight and pretty good at damaging our DNA. This light is why you slather on sunscreen — the lotion protects you from two kinds of UV light, UVA and UVB, which are responsible for premature skin wrinkling, sunburns and skin cancers. The third kind, called UVC, has too short a wavelength to cut through Earth’s atmosphere and reach our skin, so it’s not a threat to sunbathers. But it can be re-created in a lightbulb.

Research has found that UVC degrades genetic material like DNA so severely, microbes or viruses hit by the rays can’t multiply. “It doesn’t kill the virus — it renders it unable to reproduce,” says Jim Bolton, an environmental engineer at the University of Alberta. The pandemic has made UVC light disinfection much more popular, with hospitals and even the New York City subway system buying into the technology.

UVC light doesn’t discriminate when it comes to ruining genetic material, though, and can damage human skin and eye cells. Some particular UVC wavelengths have been associated with skin cancer or cataracts, Bolton says. Sanitation procedures that use the light, like the robots wheeled into hospitals, operate when no one is around to get hit by the harmful wavelengths.

Safe For Humans, But Not For Pathogens

“Far-UVC” light is supposed to be the exception to this rule, according to the Columbia University research team that came up with the concept. The term “far-UVC” refers to a specific subset of UVC wavelengths. Light that falls within this narrow range appears to get absorbed by superficial and nonliving layers of the eyes and skin. On the latter, for example, the top two layers are always dead skin cells, Bolton says. By taking in all the UV light, dead cells shield living cells beneath them from harm.

Pathogens floating alone in the air, however, lack a barrier of dead cells that can come between the far-UVC and their own precious genetic material. In theory, if a person was breathing out clouds of microbes and stood under a far-UVC light, the beams would mangle the bacterial DNA but wouldn’t get past your nonliving tissues to your healthy skin and eye cells.

The Columbia University lab that first pitched the term “far-UVC” has shown its effectiveness at disinfecting at least the H1N1 virus and the bacteria known as MRSA, and the team is working to crowdfund research on the virus causing our pandemic: SARS-CoV-2.

Linden has studied this specific UVC wavelength too — he’s starting a research project investigating different kinds of UVC light to figure out which kinds do the best job of disinfecting surfaces of SARS-CoV-2. But neither Linden nor Bolton are aware of studies that have looked at how humans fare when spending a lot of time under far-UVC light. The only completed research looking for health problems from regular exposure has been in mice. In one of these studies, the rodents sat under the rays periodically for 10 weeks and didn’t develop any tumors.

David Brenner, the director of the Center for Radiological Research at Columbia University’s Irving Medical Center, leads the university’s research with far-UVC light. His team isn’t affiliated with the installation of this technology in New York stores, he writes via email, but he says that after nearly a decade of studying far-UVC light on mice and human skin cells, “the evidence we have acquired to date, even at these much higher doses than one would use in the real world, are all reassuring.”

But without more research into how humans fare with this kind of light exposure, others think some questions are left unanswered. It’s important to be sure that these lights won’t harm employees who are standing under the bulbs for entire shifts, for example, or to know how people with preexisting skin or eye conditions will fare, Linden says. There are also uncertainties around what types of light installations will kill SARS-CoV-2. So far, research suggests that far-UVC dismantles SARS-CoV-2 RNA, Linden says, and that it can do so very quickly when the virus is floating in air. What UVC wavelengths do it best — and how long they need to target the coronavirus to ruin its RNA — is part of his upcoming research.

Ed Nardell, an infectious disease researcher with Harvard Medical School who has spent much of his career examining UV sanitation, also thinks far-UVC light is safe enough to use. The light is so easily blocked by dead skin cells or clothing, he says, that it can be a harm-free method for disinfecting the air in front of people’s faces — say, in a nail salon between technician and client.

The use of a far-UVC “disinfecting portal” that someone has to walk through, however, doesn’t hold up. “If the intention is to somehow render the customer less infectious, or to protect them from having been infected on the way out, [it] is — there’s no other word for it — stupid,” Nardell says.

Having so little of someone’s body, like their face and hands, exposed to the light before entering a business wouldn’t disinfect much of a virus. Besides, if someone is infectious, they will still be breathing out the pathogen after passing through a far-UVC light and releasing the particles near whoever they are interacting with. “It is a bad application of a really good technology,” he says.

But Linden thinks the data available on far-UVC is promising so far, and it’s encouraging to see other applications of UVC disinfecting become more popular, as it can be effective and doesn’t involve introducing new and potentially harmful chemicals into an environment. But with far-UVC, the almost sci-fi fantasy of passing through sanitizing lights seems to be materializing quickly. “I think it makes a lot of people uncomfortable. Whether or not it’s safe or not, we’ll need to find out and see what the evidence says,” Linden says.

So far, the evidence maybe isn’t where it should be. “If I was a regulator,” Bolton adds, “I’d certainly want to see more research and would not allow the use of this technology in a practical application.”

Editor's Note: This article was updated to include comments from Ed Nardell.