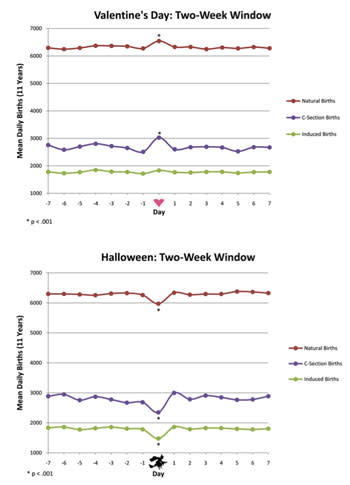 C-section and induced births dipped or spiked on Halloween and Valentine's Day...but so, intriguingly, did natural births.

With the rise of cesarean sections and scheduled births, it's no surprise that expectant mothers might favor some dates over others for their children's births. But a recent study drawing on US birth certificates from a ten-year period suggests that even with natural, spontaneous births, the mother may be able exert some kind of control over when she goes into labor

. The team found that there were about 5% fewer births on Halloween and about 4% more on Valentine's Day than there were on any day in the surrounding two weeks. The researchers think that the frightening connotations of Halloween---skeletons, zombies, and so on---as experienced by the mother might be enough to affect the hormones that control labor, putting the birth off (and vice versa when it comes to the positive connotations of Valentine's Day). But the specific biological connection between a mother's holiday-influenced emotional state and labor is still an open question. In cultures that don't celebrate Halloween and Valentine's Day but consider other days particularly auspicious or inauspicious, does this effect also happen? Inquiring minds want to know. [via New Scientist