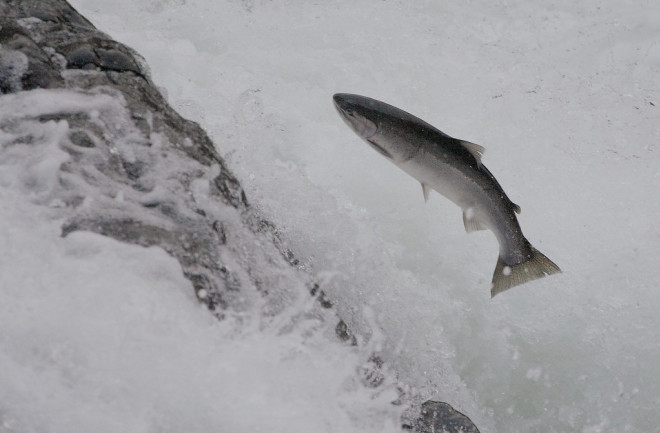 A spawning steelhead trout works its way up the Lewis River at Lucia Falls near Vancouver, WA. (Credit: Greg Shields/Flickr) The Columbia River basin, stretching from Idaho down through Washington and Oregon, is dotted with more than 200 hatcheries in which salmon and steelhead trout are raised before being released to supplement wild populations. Those wild fish have struggled on their own, due to fishing, dams that block migration routes and other human-related pressures. Hatcheries can help stabilize populations, allowing fishing operations to continue, but only if they produce fish whose offspring can thrive in the wild. Michael Blouin, a biology professor at Oregon State University, has long known that fish raised in the concrete troughs of a hatchery are different than wild fish. Blouin and his fellow researchers discovered this back in 2011. Their 19-year examination of steelhead trout — an anadromous fish in the same genus as Pacific salmon — found that steelhead raised in captivity were adapting to the evolutionary pressures of the hatcheries within a single generation. The steelhead that best adapted to hatcheries did worst, in terms of reproductive success, once they were released into the wild. Just how far they were diverging from their wild-born parents wasn’t clear until this month. Blouin and his team published new findings this month that revealed hundreds of genes were being expressed differently due to growing up in hatchery conditions. They counted 723 genes that were expressed differently between fish born from two wild parents and fish born from two hatchery-raised parents. “The study provides further, dramatic evidence that hatchery fish are very different in their adaptations than fish of wild origin,” says Peter Moyle, a fisheries biologist at University of California-Davis who was not involved in the research.

The study will help researchers determine how, and to what extent, current hatcheries affect the fish they raise, and, by extension, wild fish. New advances in our understanding of rapid evolution in domestic settings may eventually help us learn how to slow evolution it down or stop it altogether. “Data like this can inform us on what traits are being selected for in hatcheries,” says Blouin.“And that will help in our ultimate goal of changing hatchery practices so that the fish evolve more slowly.” His study showed that wild and hatchery fish express genes tied to immune function and wound repair differently. Blouin says this makes sense given that fish are crowded in hatcheries and often bite each other. But more more advances are needed in order to test those hypotheses and reach his “ultimate goal” of developing hatcheries that produce fish that are fit for life in the wild.

Spring Chinook salmon at the Winthrop National Fish Hatchery, which is located near the Methow River in Washington. (Credit: USFWS Fish and Aquatic Conservation) Large-scale gene analyses like Blouin’s certainly help gather more details and refine hypotheses about which traits are undergoing change due to domestication, but they don’t really prove anything, according to Penny Swanson, a fish physiologist at NOAA’s Northwest Science Center. She says the differences between the two groups of fish might be partially due to epigenetic changes, which affect how cells interpret their DNA, rather than actual changes to the DNA itself. “It’s probably a combination of genetic and epigenetic changes,” she says.

Researchers are getting closer to identifying how, exactly, hatchery environments affect fish. Their progress could tell us whether hatcheries, in their current forms, are actually doing more harm than good to the wild fish populations they are meant to supplement. In a 2014 paper, Moyle and his co-authors concluded that salmon and steelhead in the Klamath River basin along the Oregon-California border “are becoming increasingly dependent on hatchery propagation, a pattern that can threaten population persistence.” They found a relationship between increases in the production of hatchery fish and changes in wild fish populations. Ultimately, they concluded, hatchery fish could be replacing their wild relatives. “Hatchery fish are often detrimental to wild fish populations when they dominate spawning grounds. Fisheries for steelhead and salmon are increasingly supported by hatchery fish, and wild fish increasingly are in decline, often to threatened or endangered status,” says Moyle. If the offspring of hatchery-raised fish were well adapted to survival and reproductive success in the wild, that glut of hatchery fish wouldn’t become so much of a problem. But if hatchery-raised salmonids are significantly different than wild fish, as Blouin's studies suggest, the free fall of wild fish populations may continue. The fish that were meant to supplement their populations actually hurt the ability of offspring to survive in the wild. To avoid this outcome, the hatchery itself may need to evolve. Once we can pinpoint and prove the genetic differences, new hatchery practices and designs could eliminate the factors that are causing them.

Some of those changes might be simple. In reading over Blouin’s study, one observation stood out to Swanson: In addition to genes associated with immune function and wound repair, genes associated with metabolism were also noted as being under selection pressure among captive-raised steelhead. In the wild, Swanson said, most steelhead don’t undergo the migration to the ocean, and the physiological changes necessary to shift from freshwater to seawater, until they are two years of age. But she said hatcheries accelerate physiological changes by feeding the fish a diet that’s far more calorie-rich than in the wild, releasing them at one year of age. “That means you might be only selecting for those fish which are really aggressive eaters, but when those fish produce their offspring in the wild, where there’s not a lot of food, fish that need a lot of food may not do as well,” says Swanson. “So if hatcheries slowed growth, that might be beneficial in terms of slowing selection for fast growth.” Another change would be to mitigate the potential changes in genes related to immune function and wound repair by simply raising fish in lower densities with more places to hide. Moyle says a hatchery along California’s Russian River is raising coho salmon in low densities with more complex habitats and sending the fish out into streams as soon as possible to keep feeding and growing. “This strategy provides hope for restoring some wild populations but is unlikely to support fisheries, unless the restored wild fish spread and reproduce in large numbers,” Moyle cautioned. But with more studies pinpointing the ways hatchery-raised fish differ from their wild counterparts, it’s possible that hatcheries may eventually start evolving as rapidly as their fish appear to be.