Are Genes to Blame for Cavity-causing Bacteria? 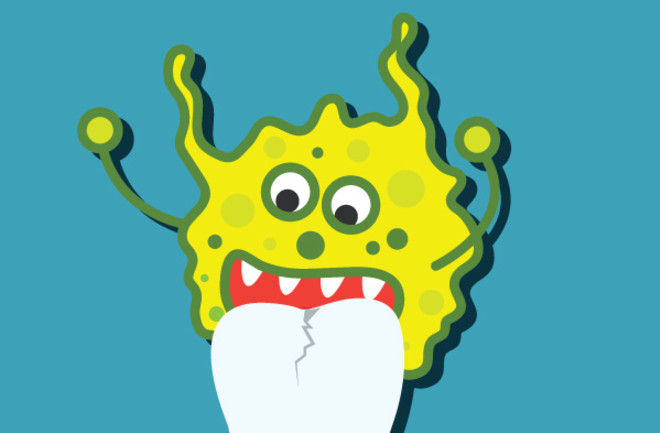 This is NOT a scientifically accurate illustration of oral bacteria. (Credit: Shutterstock)

Were you born to have bad teeth, or did you break them?

When it comes to allocating blame for tooth decay, one of the most common chronic childhood diseases worldwide, experts point fingers at both genes and dental hygiene as causes. Excessive sugar consumption and acid buildup in the mouth have long been linked with cavities, but there are clearly other factors in play.

That the casualty waters are still muddy is evident when diligent brushers and flossers get cavities, while there are those who suck down sodas and never floss somehow sport impeccable smiles.

So scientists are working to pin down all the underlying causes of cavities, and the microbial communities living in your mouth are one of those understudied wildcards. In a paper published Wednesday in the journal Cell Host & Microbe, researchers examined the role genes, the environment and an individual’s oral microbiome play in determining someone’s fate in the dentist’s chair.

To examine the interplay of all these variables, scientists turned to identical and fraternal twins. Identical twins, you’ll remember, grow from one sperm and one zygote that splits and forms two embryos—they’re genetically identical. Fraternal twins form from two different eggs, fertilized by two sperm; thus, they are genetically different. Researchers commonly turn to identical and fraternal twins to study the role genes play in the development of a trait or disease.

THIS is a real image of S. mutans, a bacteria long associated with cavities. (Credit: Wikimedia Commons)

Researchers in this study swabbed the mouths of 485 pairs of twins (205 identical twin pairs) between the ages of 5 and 11. They relied on children in the study because young siblings likely encountered the same diet and environment, which added another level of variable control.

They found that genes did, indeed, influence the composition of the oral microbiome—identical twins had microbiomes that were more similar than fraternal twins. However, the species of bacteria that were linked to heritability—the degree a trait is due to genetic variation—weren’t associated with the onset of cavities. Further, as kids age, the microbes they inherit from mom and dad decrease, while microbes introduced through the environment increase.

And, here’s the crux of the study: Researchers found no evidence that bacteria associated with the onset of cavities were driven by genetic factors. Rather, bacteria associated with cavities, like Streptococcus mutans, were in higher abundance in the mouths of kids who consumed more sugar, and vice versa. In other words, external factors tend to have an outsize role shaping the oral microbiome for the worse.

One Piece of the Puzzle

The big takeaway here is that researchers can now further target the species of bacteria that are associated with poor oral health. Ultimately, it might be possible to determine someone’s susceptibility to cavities by examining the mouth microbiome. Insights like this could do more than keep us out of the dentists’ office, because oral health can also influence the onset of disease in the rest of the body.

The oral microbiome is just one of many factors that can make or break a dentist’s visit. The strength of tooth enamel is a big one, and people with softer enamel could be more prone to cavities. The immune system and saliva composition can influence the populations of microorganisms that can cause cavities or other infections. Even the shape of teeth can cause plaque to stick around in hard-to-reach corners. These are all genetic factors that you probably can’t do much about. One study even found that a gene associated with a taste for cilantro might influence cavity formation. How? It’s not really clear, but people with higher “taste ability” consume more foods that aren’t laden with sugar. Scientists are still examining this link.

However, eating snacks, smoking, poor oral hygiene, and even snoring are all self-inflicted oral wounds—can’t blame mom and dad here.

Still, consuming acidic and sugary beverages and snacks are probably the biggest no-no’s when it comes to maintaining healthy mouth, whether your blessed with stellar genes or not.