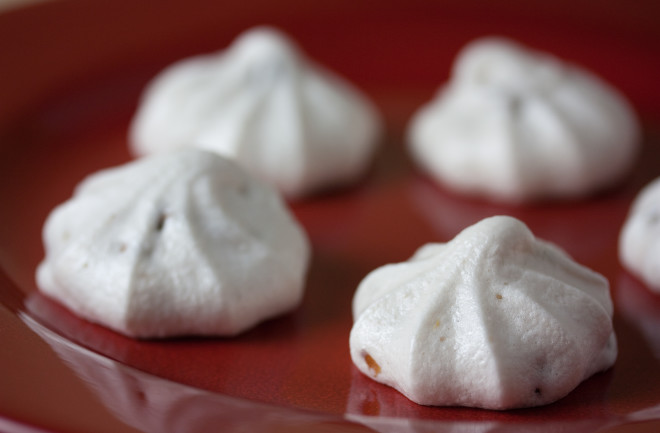 Meringues are one of the few desserts that are simple yet elegant works of art. They are also precursors to other impressive, albeit considerably more complicated, desserts such as baked Alaska, lemon meringue pies, and macarons. At the bare minimum, all you need to make a fluffy meringue is egg whites, sugar, and an electric mixer—or an egg beater and some arm power. For vegans, this egg-containing dessert is not an option—but why should vegans (and those with egg allergies) miss out on this sweet, airy dollop of heaven?

To make a decent egg-free meringue, it helps to understand the meringue at the molecular level. How does a liquid get whipped into a cloud-like solid?

Egg whites, comprising 90% water, are undeniably runny. The other 10% consists of proteins, which play a major role in the fluid-to-fluff transformation. Mechanical stress from rigorously beating the egg whites causes the egg white proteins to denature, unfold from their natural structure. This exposes various amino acids, the building blocks of proteins, to the rapidly aerating environment. Some of the amino acids are hydrophobic (water-fearing), and some are hydrophilic (water-loving). As the egg whites are whipped, hydrogen bonds form between the hydrophilic amino acids and water in the egg whites. The hydrophobic amino acids prefer to be exposed to the air that is quickly beaten into the liquid mixture. Air ends up trapped in the meshwork of denatured proteins within the developing foam, and so the longer the mixture is beaten, the fluffier it gets. To retain the trapped air bubbles and generate peaks that stand up straight, sugar is added as a stabilizer. And eccola! Una nuvola dolce nella ciotola; a fluffy meringue is ready to bake or prepare into macarons or boccone dolce.

To create an equally amazing and delicious vegan counterpart, the egg whites would have to be substituted with an ingredient that has both water-loving and water-fearing parts. Logic may think to search for a plant-based protein alternative, but French chef Joël Roessel discovered that chickpea brine works perfectly well as a vegan egg-white substitute [1]. Coined aquafaba by Goose Wohlt (Latin for “bean water”), the leftover water from a can of chickpeas can be combined with sugar and whisked into a vegan meringue that surprisingly tastes nothing like beans. Of all the possible substitutions, why does aquafaba work in lieu of egg whites?

Anne Rieder, a scientist at the Norwegian food research institute Nofima, analyzed aquafaba and revealed that the bean water contains equal amounts of proteins and carbohydrates [2]. The function of proteins in the aquafaba are similar for meringue-making; Rieber suggests that the carbohydrates may serve as an additional stabilizer by increasing the viscosity of the water portion of the foam.

To create foams like meringues, Kent Kirshenbaum, a professor at NYU, was inspired by chemistry to invent a foaming agent that is rich in saponins, currently awaiting patent approval. Saponins are a class of chemicals found in plants, including beans like chickpeas. The name derives from the soapwort plant, Saponaria, which contains the Latin root for soap, sapo; this is a fitting name, given the compound’s propensity to foam when shaken in water [3]. Like the amino acids of proteins, saponin molecules contain a hydrophobic and a hydrophilic moiety that enables them to interact with both air and water.

Whatever the reason for avoiding eggs, at least you won’t have to forfeit the heavenly delight that is a lightweight meringue cookie.