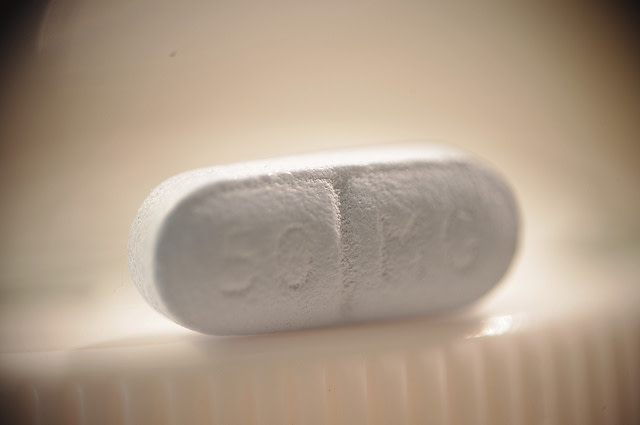 The common antidepressant Zoloft may be an effective treatment for Ebola, according to a new study on mice. Researchers also found that the blood pressure medication Vascor showed promise against the disease. And because these medications already have FDA approval for other uses, they could be available much more quickly than new Ebola drugs.

Under normal circumstances, developing a new drug and getting approval from the FDA can take ten to fifteen years and cost over a billion dollars. Hence the appeal of testing existing medications for new purposes. Drugs like Zoloft and Vascor, which have already been proven safe for people, could bypass in vitro studies, animal testing, and the first phase of clinical trials to go straight to final stage clinical trials. Lead author Lisa Johansen and her colleagues started with a library of about 2,600 compounds, which they tested against Zaire ebolavirus in the lab. Over one hundred of the compounds showed activity against the virus; of those, 80 already had FDA approval for other uses. Ultimately, based on cellular studies, the researchers selected four drugs to try on mice. They infected the mice with Ebola and then started treating them with the drugs an hour after exposure. Two drugs performed especially well: Zoloft and Vascor. Thirty days after infection, 70 percent of the mice treated with Zoloft (chemical name sertraline) had survived, and all of the mice treated with Vascor (bepridil) were alive. All the control mice had died by day nine, the researchers report this week in Science Translational Medicine.

Sertraline is a type of antidepressant called a selective serotonin reuptake inhibitor. It works by blocking reuptake of a chemical in the brain called serotonin. Bepridil treats high blood pressure by keeping calcium from entering the cells that line blood vessel walls. That keeps the vessels relaxed, or dilated. But something else happens when these drugs encounter Ebola. Both drugs seem to prevent the virus from fully entering host cells, though researchers aren’t sure yet exactly how they’re interfering with the process. Viruses like Ebola get into host cells using the same pathways that cells use to bring in nutrients and push out waste. First, a protein on the virus binds with a receptor on the outside of the cell. In response, the cell membrane folds around the virus, wrapping it in a pocket called an endosome. The endosome then opens up to allow the virus into the cell. Meanwhile, the virus has its own protective envelope. That envelope fuses with endosome and then opens up, releasing the virus’s deadly payload of RNA into the cell, where it takes over the cell’s functions and produces more virus particles. This is where sertraline and bepridil step in, according to Johansen and her co-authors. Researchers think that these drugs prevent the viral envelope from fusing with the endosome, which means that the virus can’t release its RNA into the cell.

Johansen and her colleagues haven’t yet approached the FDA for permission for a clinical trial, according to co-author Gene Olinger. He told Discover that the team is currently working toward pre-clinical assessments, and they’re also studying ways to combine the compounds to create something that’s even more active in fighting Ebola. “A disease as acute as Ebola requires strong activity and we hope to achieve better outcomes with combinations,” said Olinger. It can be difficult to design clinical trials for a disease like Ebola, which occurs in rare but intense outbreaks. Drugs can only be tested during an outbreak, but in the midst of an outbreak, it can be difficult to decide how to allocate an experimental treatment or to obtain consent from patients often too sick to communicate effectively. Doctors have struggled with those issues during the West African outbreak, and as it seems to be winding down, they may pursue other routes. “We all hope the outbreak is soon to be over, so we would rely on the animal models (rodent and nonhuman primate models) to obtain efficacy and safety data for consideration as a human use intervention,” said Olinger. The goal, of course, is to be ready with an effective treatment when the next outbreak occurs.