My recent focus on the lack of genetic continuity between hunter-gatherer and farming populations genetically and culturally is primarily due to the fact that we're not in theory-land; the extraction of ancient DNA samples is steady-as-it-goes and is sharpening and overturning our understanding of the past. The relationship between culture and genetics is of particular importance in this case, genes serve not only as markers which we can track population movements, but genes themselves are embedded in dynamics which need not be connected to population movements. Consider lactase persistence, which confers the ability to digest milk as an adult. In the 20th century "lactose intolerance" was assumed to be a pathology, but it turns out that most human populations can not digest milk sugar as adults due to the lack of production of the lactase enzyme. This is the ancestral type. Rather, different mutations which result in the persistence of lactase production into adulthood seem to have arisen independently in several regions of western Eurasia and Africa. This suggests that the mutational target zone here is large, that is, given particular selection pressures (cattle culture) mutants will arise in the background and increase in frequency which produce the phenotype of lactase persistence. The region of the world where lactase persistence is at highest frequency and greatest extent is northern Europe. It turns out that the region around LCT, the locus functionally implicated in variance of the trait of lactase persistence, has an enormous region of linkage disequilibrium around it. In other words, recombination hasn't chopped up correlations of genetic variants along DNA strands. As you know this implies several possible evolutionary events, and may be a telltale signature of natural selection in the recent past. In much of western Eurasia it seems that one SNP, -13910*T, is responsible for the shift from ancestral to derived state in regards to lactase persistence. In other words, one gene copy which had a mutant from C to T rose rapidly in frequency from northwest Europe to northwest India (there are different alleles among Arabs and various populations in the Sahel). There has already been suggestive data that ancient European populations lacked the -13910*T variant. A new study seems to confirm this. High frequency of lactose intolerance in a prehistoric hunter-gatherer population in northern Europe:

Results Here we investigate the frequency of an allele (-13910*T) associated with lactase persistence in a Neolithic Scandinavian population. From the 14 individuals originally examined, 10 yielded reliable results. We find that the T allele frequency was very low (5%) in this Middle Neolithic hunter-gatherer population, and that the frequency is dramatically different from the extant Swedish population (74%). Conclusions We conclude that this difference in frequency could not have arisen by genetic drift and is either due to selection or, more likely, replacement of hunter-gatherer populations by sedentary agriculturalists.

The sample size here is small. But they ran some simulations and it seems unlikely that so few hunter-gatherers would have the derived frequency which is extant at high frequencies among modern Swedes. Additionally, we know that this locus shows signatures which might indicate recent natural selection. That is, it rose in frequency recently in many populations. And there are a other studies from Germany which suggest a similar transition, whereby ancient populations lacked lactase persistence. 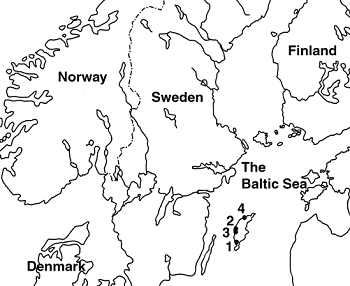 The samples were from the island of Gotland, and date from 2,800-2,200 BCE. In other words, contemporaneous with the Sumerian civilization and Old Kingdom Egypt. This might be prehistoric in Europe, but not on a worldwide scale. They were from the Pitted Ware Culture, and predated agriculture in this region by about ~1000 years. Here's what Wikipedia says about the PWC:

The Pitted Ware culture (ca 3200 BC– ca 2300 BC) was a neolithic Hunter-gatherer culture in southern Scandinavia, mainly along the coasts of Svealand, Götaland, Åland, north-eastern Denmark and southern Norway. It was first contemporary and overlapping with the agricultural Funnelbeaker culture, and later with the agricultural Corded Ware culture.

Some sources seem to suggest that the in the zone of the Funnelbeaker culture which succeeded the PWC we invariably see contemporary high frequencies of lactase persistence. So these results are not inexplicable or a total shock. The main question is this: did the genetic variant spread to Scandinavia through positive selection, or population movement, or a combination? A reasonable guess would be some of both, but the real answer lay in establishing the proportion. In other words, how many of the hunter-gatherers were assimilated? The high fitness benefits conferred by LCT means that even in an admixed population it would rise in frequency. The main suggestive aspect here is the one individual who is a heterozygote. Phenotypically they should express lactase persistence. Who was this individual? Unfortunately they didn't get more of the total genome, but this person might have been of mixed origin, and so illustrate the complex dynamics of how farming spread. A few years ago I would have assumed that LCT spread in Europe by natural selection, introgressing into the hunter-gatherer substrate as they adopted farming and cattle culture. Today I am not sure. It is clear that lactase persistence has been subject to natural selection, but that does not entail that it spread only through individual level dynamics. On other words, population replacement is now a serious possibility. That opens up the likelihood that much of the population of northern Europe are relatively new settlers in the context of human history, that they even post-date the civilizations of Egypt and Mesopotamia. Interesting times.