Ancestry in the Americas

The populations of the African Diaspora have a particular interest in the new genomics, and its relationship to ancestry. Unlike other post-Columbian Diasporas they have sketchy, at best, knowledge of the regions from which their ancestors arrived. This probably explains the popularity of Roots and Henry Louis Gates Jr.'s various genealogical projects which have utilized cutting edge genomics. It may seem silly to hang one's hat on one maternal lineage, but perhaps it seems silly if you are relatively assured of the broad outlines of your own genealogy. The fact that I am U2b is not very interesting to me, but I also happen to know that my maternal grandmother's mother's family were long resident in their region of Bengal (and, that her father was a migrant from northwest India). It would be a different matter if my ancestors had been enslaved and dispossessed of their heritage. A new paper in PLoS ONE surveys the paternal (NYR), maternal (mtDNA), and autsomal (using 175 ancestrally informative markers), heritage of a range of African origin populations from across the Americans. Dissecting the Within-Africa Ancestry of Populations of African Descent in the Americas:

Our analysis revealed that both continental admixture and within-Africa admixture may be critical to achieving an adequate understanding of the ancestry of African-descended Americans. Whilecontinental ancestry reflects gender-specific admixture processes influenced by different socio-historical practices in the Americas, the within-Africa maternal ancestry reflects the diverse colonial histories of the slave trade. We have confirmed that there is a genetic thread connecting Africa and the Americas, where each colonial system supplied their colonies in the Americas with slaves from African colonies they controlled or that were available for them at the time. This historical connection is reflected in different relative contributions from populations of W/WC/SW/SE Africa to geographically distinct Africa-derived populations of the Americas, adding to the complexity of genomic ancestry in groups ostensibly united by the same demographic label.

There isn't anything too surprising here. Blacks from Brazil have much more ancestry from the former Portuguese colonies of Angola and Mozambique. As we should expect. Because the New World African Diaspora dates to only the past 350-150 years even mtDNA should be a good snapshot of the genetic variation. And, because of the ability to construct clean genealogies due to lack of recombination, mtDNA can be even more informative than total genome surveys in terms of elucidating fine-grained geographical patterns. The map below illustrates the mtDNA results well: 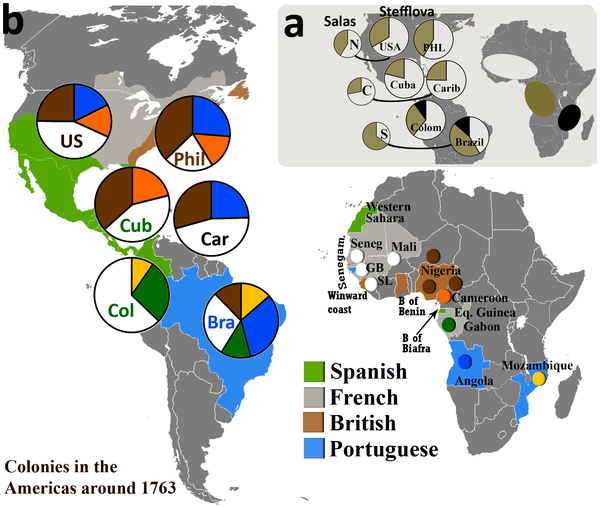 But I was more interested in some patterns comparing the various African and European identified populations. In the figure which I stitched together below you have maternal ancestry on the left, paternal in the middle, and total genome ancestry to the right. The first panel has self-identified blacks from various nations, and the second has self-identified whites from Brazil and Philadelphia, USA. These results need to be taken with a grain of salt, because the samples from each nation need not necessarily be representative of the ethnicity for that whole nation (e.g., blacks in coastal Georgia have far less white ancestry than those in urban northern cities). But they give a rough picture of the differences and similarities. 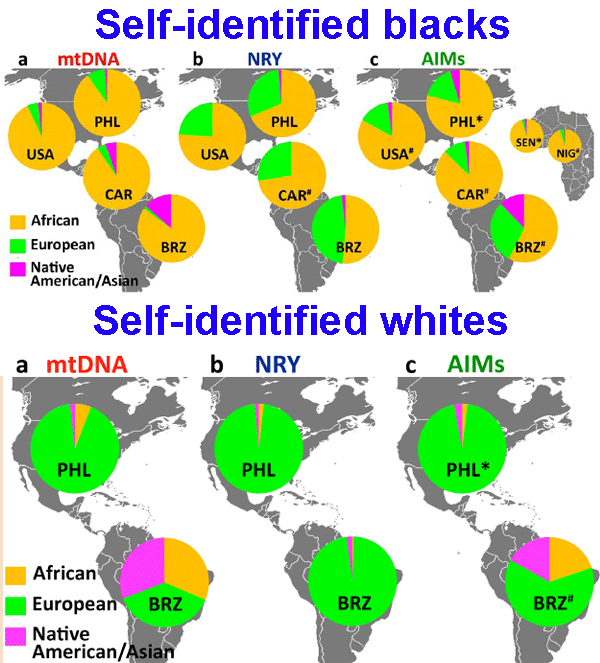 Here the numbers with margins of error as well:

Similarities: a strong bias toward more male European ancestors, and more female African and Native ancestresses. This is what you'd expect. But look at the Brazil black sample. The disjunction between nearly total lack of female European ancestry and a substantial proportion of male European ancestry is rather striking. I think this is partly a function of the strong male bias of the Portuguese settler community. A process of "whitening" of the original mulatto and mestizo population of the colony probably occurred with each successive generation of male immigrants, who married into the hybrid communities and shifted the total genome content, though not the maternal background. The biggest difference of course is the much more clear and distinct difference between the races in the USA as opposed to Brazil. A minority of Brazilians identify as black, while a plural majority identify as white (the remainder are "brown" or mixed-race). And yet Brazilian blacks are ancestrally much whiter than American blacks, while Brazil whites are ancestrally much less white than American whites. Additionally, while Brazil perceives itself as a mulatto nation, there is a substantial Amerindian substrate which spans the black, white, and brown, populations. Finally, going back to the main theme of the paper, African population structure, one of the main rationales is for purposes of medical research where stratification of ancestry within an aggregate pool may lead to spurious associations. In other words, mixing blacks with ancestry from Angola with those from ancestry from Nigeria may result in false positives in GWAS due to differences in predispositions of traits between these populations, which also track their genetic differences. The authors bring up the fact that African populations are the most genetically diverse in the world. But let me resurrect a comment from geneticist Nick Patterson:

I want to comment on Africa’s genetic diversity. There is a great deal of genetic diversity within many African populations. For instance more diversity within Yoruba than within Europe. But many African populations are quite similar. For instance divergence between Kikuyu (Kenya) and Yoruba (Nigeria) is just a little more than (Spain, Holland). This is of course caused by the Bantu expansion as Razib explained.