An umbrella against the mutational showers

Mutations are as you know a double-edged sword. On the one hand mutations are the stuff of evolution; neutral changes on the molecular or phenotypic level are the result of from mutations, as are changes which enhance fitness and so are driven to fixation by positive selection. On the other hand mutations also tend to cause problems. In fact, mutations which are deleterious far outnumber those which are positive. It is much easier to break complex systems which are near a fitness optimum than it is to improve upon them through random chance. In fact a Fisherian geometric analogy of the affect of genes on fitness implies that once a genetic configuration nears an optimum mutations of larger effect have a tendency to decrease fitness. Sometimes environments and selection pressures change radically, and large effect mutations may become needful. But despite their short term necessity these mutations still cause major problems because they disrupt many phenotypes due to pleiotropy. But much of the playing out of evolutionary dynamics is not so dramatic. Instead of very costly mutations for good or ill, most mutations may be of only minimal negative effect, especially if they are masked because of recessive expression patterns. That is, only when two copies of the mutation are present does all hell break loose. And yet even mutations which exhibit recessive expression tend to generate some drag on the fitness of heterozygotes. And if you sum small values together you can obtain a larger value. This gentle rain of small negative effect mutations can be balanced by natural selection, which weeds does not smile upon less fit individuals who have a higher mutational load. Presumably those with "good genes," fewer deleterious mutations, will have more offspring than those with "bad genes." Because mutations accrue from one generation to the next, and, there is sampling variance of deleterious alleles, a certain set of offspring will always be gifted with fewer deleterious mutations than their siblings. This is a genetics of chance. And so the mutation-selection balance is maintained over time, the latter rising to the fore if the former comes to greater prominence. The above has been a set of logic inferences from premises. Evolution is about the logic of life's process, but as a natural science its beauty is that it is testable through empirical means. A short report in Science explores mutational load and fitness, and connects it with the ever popular topic of sexual selection, Additive Genetic Breeding Values Correlate with the Load of Partially Deleterious Mutations:

The mutation-selection–balance model predicts most additive genetic variation to arise from numerous mildly deleterious mutations of small effect. Correspondingly, "good genes" models of sexual selection and recent models for the evolution of sex are built on the assumption that mutational loads and breeding values for fitness-related traits are correlated. In support of this concept, inbreeding depression was negatively genetically correlated with breeding values for traits under natural and sexual selection in the weevil Callosobruchus maculatus. The correlations were stronger in males and strongest for condition. These results confirm the role of existing, partially recessive mutations in maintaining additive genetic variation in outbred populations, reveal the nature of good genes under sexual selection, and show how sexual selection can offset the cost of sex. 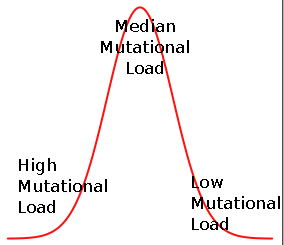 Additive genetic variance just refers to the variation of genes which affect the phenotype by independent and usually small effects which sum together to produce the range of variation of the trait. Imagine for example that the range of variation in height within the population was 10 inches, and that there were 10 genes which varied, and that each gene exhibited co-dominance. One could construct a model where every gene pair could add 0, 0.5 or 1 inch to the height independently, so that the maximum height could be constructed by adding 10 inches to the baseline and 1 inch per locus, and the minimum height by adding no inches to the baseline when each locus is homozygous for null alleles. Mutations can be conceived of in the same manner, with each mutation being a new variant which changes trait value. Even if most of the impact of a mutation is masked there is a small effect in the heterozygote state, and this may serve as a fitness drag. The range in mutational load can then naturally be analogized to additive genetic variance, in this case the trait under consideration ultimately being fitness, mediated through life history and morphological phenotypes. In this report they focused primarily on the weevil's ability to obtain resources and transform those resources into size, which correlates with greater sexual access for males and fecundity for females (ergo, greater fitness). They bred various outbred and inbred lineages across families of these weevils, because these sorts of crosses gauge the impact of masked deleterious alleles, which will manifest in homozygote state more often between related pairs who share mutations than unrelated ones. They found a correlation of -0.24 between inbreeding and breeding value; in other words the more inbred the pair the fewer offspring. The impact of these recessively expressed alleles is mitigated in heterozygous individuals, but because of the non-trivial impact the number of these alleles within an individual will determine its fitness all things equal.

Interestingly when background variables were controlled males tended to show the greatest fitness drag due to inbreeding depression. This would comport with models of sexual selection where males justify their expense (because they can not bear offspring) within the population by serving as the perishable dumping grounds of bad genes. In particular in a polygynous population a few healthy males with good genes could give rise to most of the next generation, and so providing the balance of selection to the background mutational rate. Of course mating patterns vary between taxa. The more reproductive skew there is, in particular for males, the more recourse selection has every generation to dump deleterious alleles via selection. In contrast monogamous populations will have less power to expunge mutations in this fashion because there is more genetic equality across males, the bad will reproduce along with the good, more or less. Therefore a breeding experiment of weevils may have more limited insight than these authors may wish to admit. Geoffrey Miller's The Mating Mind attempted to take the insights of sexual selection and develop a model of human evolutionary history, but it does not seem that this theory has swept all before it. Only time will tell, but until then more breeding experiments can't help but clarify where theory goes wrong or right. Citation: