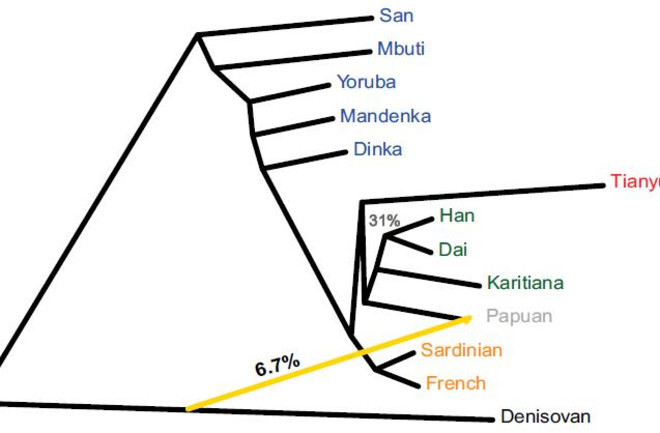 Citation: Q Fu, M Meyer, XGao, U Stenzel, H A. Burbano, J Kelso, S PääboDNA analysis of an early modern human from Tianyuan Cave, ChinaPNAS 2013 ; published ahead of print January 22, 2013, doi:10.1073/pnas.1221359110 The above is a graph which illustrates phylogenetic relationships using the TreeMix package. It is from the paper I alluded to yesterday. The paper, DNA analysis of an early modern human from Tianyuan Cave, China, is open access, so everyone should be able to read it. Its mtDNA analysis shows that the Tianyuan sample, from the region of Beijing and dating to ~40,000 years B.P., is a basal clade in haplogroup B, which is common in eastern Eurasia and the New World. This is a satisfying result insofar as the understanding in relation to this haplogroup is that it diversified ~50,000 years B.P. There is very strong support in these data for the proposition that Tianyuan forms a distinct clade with the populations you see above, as opposed to western Eurasians. This is important because this sample seems to date with relatively good precision to 40,000 years B.P., supporting the archaeological contention that modern humans were already diversifying into western and eastern lineages 40-50,000 years ago. In contrast statistical genomic inferences tend toward a lower date for divergence. We can be moderately confident at this point that some aspect of the west-east divergence predates subsequent later gene flow events, which might lead to confusing archaeology-blind methods. More interesting to me is that these data do not resolve very well the relationship of Tianyuan with Melanesians vs. East Asians & Amerindians (that relationship are supported in 31% of bootstraps as opposed to 100% for all the others). This may be a function of poor data quality (one reason Tianyuan presumably is on a 'long branch'). But, it may also be a function of the fact that at ~40,000 years B.P. the extant clades of humans as we understand them were in only their early stages of formation. And critically it seems likely that some of the modern populations which are included in this data set are the byproducts of complex demographic admixture events subsequent to ~40,000 B.P. Seeing as we are getting very strange results out of Oceanian populations, some well supported now, others more speculative, the fact that the tree is unclear at this particular point is not entirely out of our expectation. I assume that in the near future with more of the genomes of ancient individuals sequenced a picture of the past not so reliant on the variation of the present will emerge. As it is with only a few individuals it is necessary to filter the past through the lens of the present, and that is going to add distortions.