An Embarrassment of Chimps

The U.S. is the last Western country that still uses them for medical research 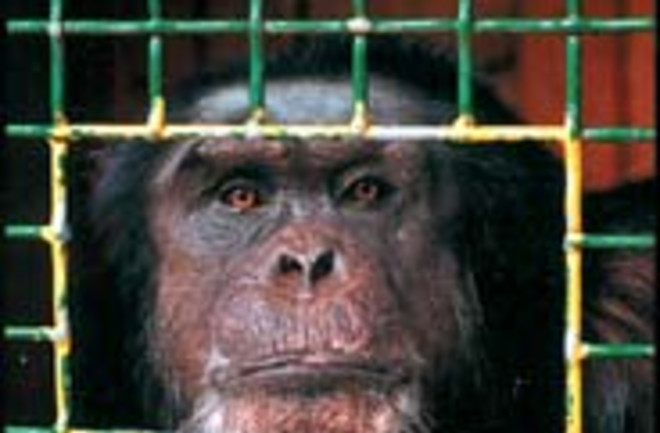 As a research chimp, Billy Jo underwent 43 liver biopsies, three bone-marrow biopsies, and two lymph-node biopsies. He also chewed off his thumbs while the hallucinogenic effect of a tranquilizing and painkilling drug wore off.

Gloria Grow hopes to move the chimps out of cages and is work-ing to build an island on her property where they can live and roam freely.

After years spent in lab cages just 5 by 5 by 7 feet, the chimps arrive at the Fauna Foundation lacking social skills. Slowly they learn to enjoy hanging out in the playrooms, where favorite games are peekaboo and hide-and-seek. When they're anxious—which is often—they can retreat to small cages to be alone.

Regis, who also likes to draw and play a flute, loves to watch TV. The Playboy Channel is a perennial favorite with many of the chimps.

The night of Pablo's death, Allan conducts a hasty necropsy, but neither he nor his colleagues have had much experience handling a large and potentially infectious animal. His veterinary clinic is well-supplied with Tyvek suits and latex gloves but short on masks and goggles. Everything seems too small for Pablo's frame: the clinic's back door, the operating table, especially the freezer into which Allan and a sobbing Grow stuff his body when the procedure is finished.  Eighteen days later, after Grow has pleaded unsuccessfully with different agencies to perform an official necropsy, the Montreal health department presses a pathologist into service at the vet school in Saint-Hyacinthe. The immediate cause of death is listed as an acute lung infection, but the physician who examined the body also found an abdominal infection and mild hepatitis. Internally, the animal's organs were crisscrossed with thick, fibrous scars, most likely the remainders of various procedures. To do an animal biopsy, a technician uses a punch to clip out a chunk of tissue. The procedure leaves a large hole that, if infected, can take years to heal. Pablo was also vulnerable to infection on another front. Darts fired from an air pistol are, by definition, non-sterile; each penetration carries germs from the surface of an animal's skin into its body.  According to his research dossier, Pablo, known as Ch-377 at the New York University lab, had been darted 220 times, once accidentally in the lip. He had been subjected to 28 liver, two bone-marrow, and two lymph-node biopsies. His body was injected four times with test vaccines, one of them known to be a hepatitis vaccine. In 1993 he was injected with 10,000 times the lethal dose of HIV. The barrel-chested chimp had shrugged off AIDS and kept hepatitis at bay only to die of an infection aggravated by years of darts, needles, and biopsies.  "We always knew the chimps had a lot of problems," Grow said two months after Pablo's death. "But we always thought they were problems we could take care of—because they were on the outside. Now we are learning that there are a lot of things going on inside them that we may never know about. Annie's sick now. Jeannie's sick now. What happened to Pablo wasn't unusual; it was average."  Activists insist that animal-free science is already here—in the form of in vitro research, data gleaned from autopsies, clinical observation, and epidemiology. But the scientists who work with chimps say that the inoculations, biopsies, and knockdowns, though regrettable, are necessary. "I think the idea of moving to humans is nonsense," says Alfred Prince, the hematologist who heads chimpanzee research in Liberia. "Ethics committees in hospitals are getting tougher and tougher, and the work you can do in people is less and less. We will probably always need animal models. . . . I think the answer is, if you're going to do this work on chimps, you better take really good care of them." Other researchers, including primatologist Roger Fouts, believe that the days when we are willing to imperil an endangered species for our own sake may be numbered. Until then, research will proceed, and people like Gloria Grow will be left to deal with the results, as she did in January, when Annie, the grande dame of the chimp house, died. Her body is awaiting a necropsy. Then the body will be sent, like Pablo's, to a local crematory that donates its services to Fauna. Grow plans to bury some of the ashes of both animals at the sanctuary. This spring Jane Goodall will take the rest of the ashes with her to Tanzania to sprinkle in the forests of Gombe, where chimps dance to stop the rain.

To learn more about the Fauna Foundation, go to their Web site: www.faunafoundation.org. Chimpanzee sanctuaries in the United States include the Center for Captive Chimpanzee Care (www.savethechimps.org) and Primarily Primates (www.primarilyprimates.org). Chimp Haven, a federally funded sanctuary that will provide homes for at least 200 chimps, is going to be built near Shreveport, Louisiana (www.chimphaven.org). To hear the case for animal research, see the Web site of the Foundation for Biomedical Research: www.fbresearch.org. Americans for Medical Advancement is a non-profit organization thatopposes biomedical research on scientific grounds.: www.curedisease.com