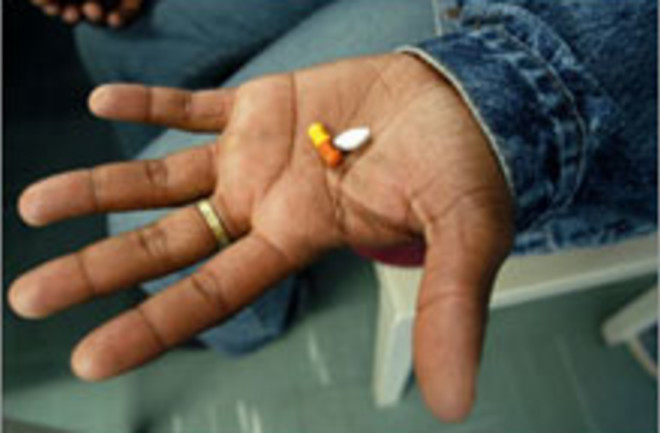 Almost 3 million AIDS patients in developing nations are now receiving treatment from the life-extending antiviral drugs, according to a new report. It sounds like good news, until you realize that the World Health Organization (WHO) had hoped to reach that milestone in 2005. AIDS advocates say the international community was slow to commit to the monumental task of providing drugs to rural patients around the world, many of whom don't even know that they're infected. But in the past few years, boosted by the Bush administration's five-year, $15 billion AIDS program and an organized international effort, the project began to have effect. In late 2003, antiviral drugs were available to only 50,000 AIDS patients in Sub-Saharan Africa; today, 2.25 million people in that region have access to the medication they need. The new report, released yesterday by WHO and several other international organizations, trumpeted such pieces of good news, but couldn't escape the dominant fact that treatment and prevention efforts are not keeping up with the spread of the epidemic.

About 1 million people received the life-saving drugs for the first time during 2007, according to the report... During the same period, however, an additional 2.5 million people were infected with HIV, the virus that causes AIDS, indicating that health agencies are not gaining ground on the deadly infections [Los Angeles Times].

In one promising development, the past few years has seen a surge in the number of pregnant women given access to the antiviral drugs, which prevent them from passing the virus on to their unborn children. But again, there is bad news to counterbalance.

But even as health systems geared up to prevent mothers from passing on the disease to their children, the needs of the mothers themselves were neglected. Only 12 percent of H.I.V.-positive pregnant women were assessed for whether they needed treatment themselves. When mothers die of AIDS and their children are orphaned, the opportunities and even survival of the babies who were saved from infection are undermined [The New York Times].

The physicians on the front lines of this battle say that the achievements made thus far are a cause for optimism, and a sign of what can be done if the international community puts its full weight behind the effort to halt the spread of AIDS. "Achieving the goal two years late is still quite remarkable," said Dr. Kevin De Cock, director of HIV/AIDS at the World Health Organization

... "In retrospect, maybe it was excessively aspirational," De Cock said Monday in a telephone news conference. But he said that in battling the AIDS epidemic, "aspiration is necessary" [San Francisco Chronicle].

More From Discover
Health
Omicron Variant: What We Know So Far
Health
Deer Can Carry the Coronavirus: Here's What That Means for the Pandemic
Health
Learning From the World’s Worst Diseases
Health
Antibiotic-Resistant Bacteria: What They Are and How Scientists Are Combating Them
Health
Real Medical Conditions that May Have Inspired Vampire and Werewolf Myths
Health
Children and COVID-19: How Should We Consider the Risks?
Recommendations From Our Store
My Science ShopDiscover STEM Kits
My Science ShopDiscover 2022 Calendar
My Science ShopStrange Science
My Science ShopElements Flashcards
Shop Now
Stay Curious
Join
Our List