Alzheimer's Spreads Like a Virus From Neuron to Neuron, Studies Show 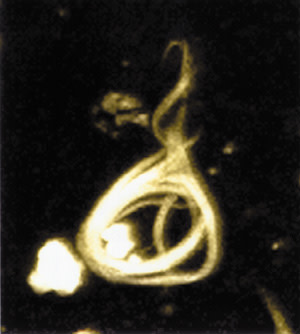 A protein tangle in an Alzheimer's-afflicted neuron

Exactly how Alzheimer's disease proliferates through the brain, overtaking one region after another, has eluded scientists. As the disease progresses, tau---a malformed protein that forms snarls and tangles inside neurons---shows up in more and more brain areas. Researchers have wondered whether tau, and the disease, are working their way out from a single area of origin or mounting numerous, distinct attacks on vulnerable parts of the brain. Two new studies in mice provide strong support for the first idea: Tau see

ms to pass from affected cells to their neighbors

, spreading much the same way a virus or bacteria infection would. The studies---one recently published in PLoS ONE

in the entorhinal cortex

, the tiny bit of brain tissue where Alzheimer's first appears in most patients. Since those cells, but not others, were equipped to produce human tau, any tau that showed up elsewhere in the brain could be traced back to the entorhinal cortex. The researchers watched and waited, and found that the tau proteins spread through neural circuits out into other areas---and where tau went, cell death followed, slowly decimating the rodents' brains. Human brian imaging studies and autopsies had pointed toward the same answer, but hadn't been conclusive. These studies in mice provide stronger support for the idea of Alzheimer's infection-like spread (though unlike many actual viruses, of course, the disease isn't contagious). What's more, on the heels of the Obama Administration's call to treat or prevent Alzheimer's by 2025

, this research points towards an intriguing possibility for treatment: targeting tau before it makes its way to other parts of the brain

could perhaps slow or stop the progress of the disease.

MindFrom Minneapolis to Facebook Feeds, Police Protests are Roiling our Psyches
Recommendations From Our Store