Allergy Sufferers of the World: Don't Stress, You'll Only Make It Worse 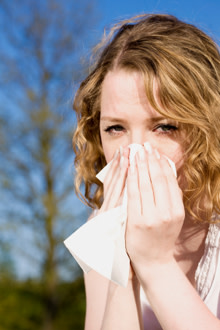 A coughing, sniffling allergy attack can be bad enough on its own. But one thing may exacerbate allergies even more: stressing out. A team led by Jan Kiecolt-Glaser of Ohio State University found that out when they put hay fever and seasonal allergy sufferers to the test, and found that people under high stress have much stronger and longer allergic reactions than people who stay relaxed. First, Kiecolt-Glaser and colleagues had 28 test subjects participate in fairly-low stress activities like reading aloud from a magazine, and then checked them for wheals—small swellings on the skin that are usually signs of an allergic reactions. When researchers put the same people through more stressful activities, like solving math problems in their heads or giving a speech in front of people they were told to be behavioral experts, many of the subjects' allergy symptoms spiked. The subjects rated their own emotional response to the experiments, and people who said the high-stress tests made them moderately anxious had wheals that were 75 percent larger than when they did the low-stress activities. Those subjects who said the tests had made them the most anxious had wheals twice as big as before. And they had many more strong reactions when scientists gave them skin tests—four times as many as when they weren't stressed, even if the researchers didn't take the skin sample until the day after the high-stress activities. There's bad news all around: First we found out global warming would bring worse symptoms for allergy sufferers, now it's something else that seems to be getting worse with time—the stress in our lives. Just don't start stressing about global warming, like the young man with "climate change disorder." Then you'll never stop sneezing. Image: iStockphoto