All That Thinking Was Exhausting; Let's Eat 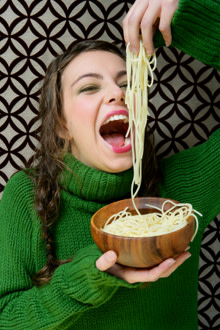 There's more than driving-versus-walking or sitting-versus-standing that has North Americans getting fatter than ever. A study by Canadian researchers suggests that we're also more likely to stuff our faces after a longer period of mental exertion. The scientists studied 14 women doing three activities: sitting peacefully; reading and responding to a text; and taking a strenuous exam on a computer. After each exercise, the subjects were allowed to eat whatever they wanted from a buffet, not knowing that this was the true object of the study. The researchers say that the women ate many more calories—between 23 and 30 percent more—after the difficult test than they did after the more relaxing activities. Of course, this research had a small sample size, and college students might not be indicative of the eating habits of the nation as a whole. And as far as the scientists' suggestion that this could be one of the contributors to the obesity problem because so many people have mentally-demanding jobs: Perhaps that's true, but it's also possible that people find their work less stressful than taking a computerized test while being watched and studied. Still, it is awfully nice to pig out after a long day of thinking hard. Image: iStockphoto