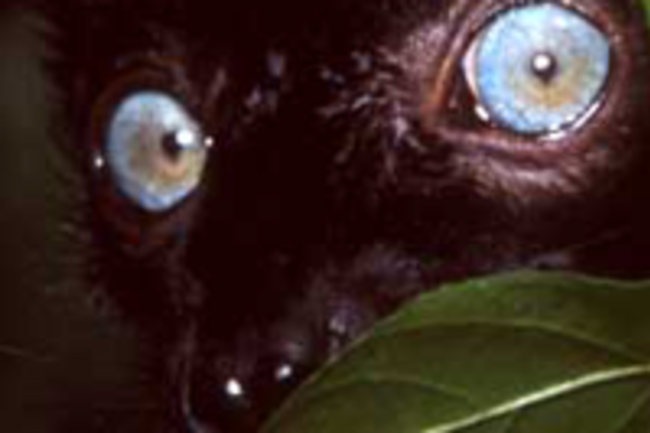 p-ter has a post up which he illustrates with a photograph of a rather ghoulish prosimian. I've read that some of the Victorians found chimpanzees & gorillas almost obscene because of their simultaneous resemblance to humanity and manifest inhumanity. I somewhat feel the same about prosimians, especially tarsiers. No doubt this is due to my relative familiarity with immature chimpanzees on television shows. In any case, there is a new paper out which demonstrates that the genetic architecture of blue eyes in two species of lemurs is not similar to that in humans. Contrast this to the case for horse and zebrafish. A simple story could go that the specific character of a species' genetic architecture, the structure of relationships of genetic variation which contribute to the nature of a given trait, is purely a function of historical accidents, or, that there are widespread convergences across taxa. At least for pigmentation it looks to be a mix, which restrains us I suppose from making glib generalizations and inferences as to likelihoods. In the comments I wondered about Siamese cats, and the first author on the paper was kind enough to leave a comment:

Blue eyes in Siamese cats is likely due to a tyrosinase mutation: http://www3.interscience.wiley.c...652329/ abstract [Well, that's proximate, Satan undoubtedly ultimate] We did sequence this same HERC2 region for a few Burmese cats and Siberian huskies - they have the same conserved mammalian sequence.