An athletic young man's skin cancer is spreading quickly and is likely to be fatal — then his health takes an unusual turn. 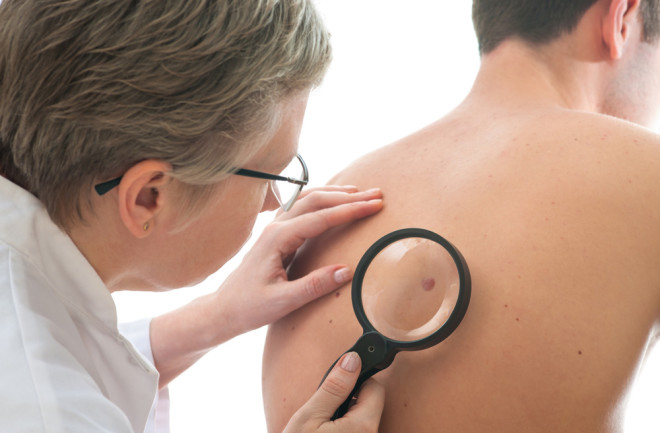 During a pickup basketball game one afternoon, Daniel — healthy, fit and in his mid-30s — heard his friend utter the words he would never forget. “Dude, what’s that black blotch on the back of your shoulder?” A few weeks later, Daniel was diagnosed with an aggressive form of skin cancer, malignant melanoma.

Through a surgical procedure known as Mohs’ micrographic surgery, his doctors removed the cancerous cells. But about two months later, he noticed a lump in his armpit — the cancer had spread to his lymph nodes. He underwent intensive chemotherapy, but his disease relentlessly progressed, spreading to his lungs. Daniel began interferon-alpha therapy, a treatment that boosts the body’s immune system response against tumors, but it made him so ill that after the first round he declined further treatment.

By the time I first saw Daniel, about a year after the diagnosis, the melanoma also had reached his liver, and he was declining fast. He had little appetite and had lost about 35 pounds. He could no longer work, let alone play basketball, and he relied on a cane just to walk. And now the cancer had spread to his bones, causing severe pain in his right hip. Realizing he might have only a few months to live, I gave Daniel a very short course of radiation therapy directed exclusively to his hip to relieve the pain. Like surgery, radiation therapy is a local therapy, meaning that (unlike chemotherapy and other systemic therapies) it generally affects only the irradiated area.

I told Daniel he could come back for follow-up the next week if he was feeling up to it. Or I could just speak to him on the telephone. Daniel did return the following week, and his hip already felt much better. The radiation worked. I scheduled him for a three-month follow-up, with the understanding that if he was not well enough to travel to the clinic, he needn’t come in. Although I was thrilled his pain was gone, his prognosis remained dismal, and the palliative radiotherapy was not going to change that. Honestly, I did not expect to see Daniel ever again.

But to my surprise and delight, he returned three months later. His hip pain was completely gone — in fact, he had quit taking his pain medicines. He had a healthier complexion and had gained nearly 10 pounds. He looked far better than he did a few months back.

A CT scan was scheduled for that day, but I reminded him it was moot; if we found any new disease, we had no new therapeutic options to offer. So why bother? But Daniel wanted to have it. I walked him over to Radiology and told him to come back to my office afterward so we could review the results together. That’s when things suddenly got more interesting.

An hour later, I walked back to Radiology to view Daniel’s scan. Amazingly, there was no evidence of cancer in his lungs or liver. His bones looked normal, and his lymph nodes were no longer grossly swollen. My first reaction was that there must be a mistake; the labels must have been mixed up. This obviously could not be Daniel.

But looking closer, I could see tiny “radiographic scars,” traces of where Daniel’s cancer once was. But no tumors remained.

I brought the scans back to my office and shared them with Daniel. I asked him if he had undergone any additional therapy, as the hip radiation should not have affected the distant cancer in his lungs, liver and lymph nodes. But no: He said the only change he made was to discontinue his pain meds.

Daniel left with a big grin and an appointment to return in a few months. I thought I was the happiest man on Earth that day, but I was wrong — I was the second-happiest guy alive.

When Daniel returned three months later, he looked like a new man. He had packed on another 5 pounds of solid muscle, and not only was he back to work, he had played a little basketball for the first time in a long while. After another two years of routine checkups and clean CT scans, Daniel elected not to come in for additional follow-up. He had work to do and a life to live. Defying all expectations, he was apparently cured. That was about 12 years ago.

How Did This Happen?

Obviously, I welcomed Daniel’s miracle cure, but it continued to bewilder me. His case was my first and most dramatic encounter with the rare and obscure “abscopal phenomenon,” in which, after local irradiation, cancer disappears outside of the radiation field. Witnessing the effect once can be enough to launch any clinician into a lifelong Ahab-like obsession. I have been attempting to decipher exactly what happened to Daniel and what might make it work for other patients.

The abscopal phenomenon (abscopal is derived from Latin and Greek words meaning “away from the view, target or aim”) was first described in 1953 by physician R.H. Mole, who observed cases where irradiation to one part of the body affects distant regions. Although usually associated with radiotherapy, it has also been observed after other local cancer treatments, such as cryotherapy and hyperthermia. The phenomenon defies reason: A local cancer treatment, even if it sterilizes all the cancer in that region, should not cause metastatic cancer to vanish. But it does happen, not only in melanoma but also in other kinds of cancer as well. Exactly how it works remains a mystery, but many researchers believe the underlying mechanism involves the immune system.

Cancer that has been kept in check by the immune system can sometimes reawaken. If a donated organ harbors even microscopic amounts of cancer, for example, that cancer can potentially reignite under the organ recipient’s necessary immunosuppression. When this happens after a kidney transplant, one strategy is to stop suppressing the immune system, allow the body to reject the donated kidney (and the cancer), then remove the kidney and place the patient on dialysis or transplant another kidney. (Obviously this strategy is not feasible if the transplanted organ is absolutely vital, as in heart, lung and liver transplants.)

This approach sometimes works. But other times, the recipient’s reawakened immune system rejects the transplanted kidney, as expected, but gives the transplanted cancer a free pass. Even though the cancer comes from another person’s body, for some reason it remains “invisible” to the host’s immune system. Somehow the cancer has created a highly effective cloaking device.

How can this be? Some research suggests that cancer can hijack the immune system, lulling it into believing tumor cells are normal tissue. In the abscopal phenomenon, the spell may somehow be broken, allowing the immune system to snap to attention and recognize the cancer for what it truly is. High doses of radiation sometimes cause cancer cells to release antigens that had been masked. Perhaps these antigens appearing on millions of cancer cells that are about to die, or the release of such antigens just after the cells’ death, alerts the immune system that something is awry at a more global level.

Alternatively, regulatory T cells — which, in cancer patients, usually shield tumors from an immune response — may be triggered to expose the cancerous cells to the body’s defenses. No one knows for certain.

Recently, there has been an encouraging resurgence of research on cancer immunotherapy, and the abscopal phenomenon could play a key role in some novel approaches. Somewhere in cases like Daniel’s, there lies a critical clue that may enable us to unleash the full fury of the immune system on our ancient enemy, allowing us to intentionally bring about similar outcomes for other fortunate patients.

[This article originally appeared in print as "Disappearing Act."]