A routine dinner with clients leads to an unexpected crisis for a 60-year-old salesman. 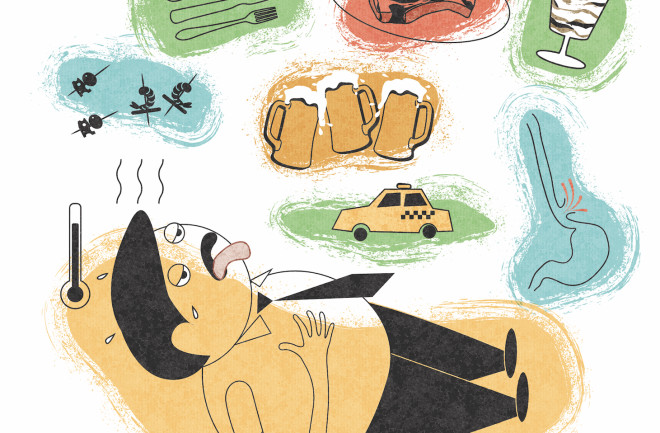 This article appeared in the January/February 2022 issue of Discover magazine as "Business as Usual." Become a subscriber for unlimited access to our archive.

The quiet of my night on call was interrupted by the familiar chime of my pager. The message on the screen requested I come to the emergency room to evaluate a patient with chest pain. For a gastroenterologist, “chest pain” is a bit of an uncommon symptom; usually, such concerns go to cardiology. But sometimes people with chest pain have a GI cause for their troubles.

When I arrived in the ER, the patient was sitting up in bed, leaning forward, and gently rocking back and forth in what was clearly a state of significant distress. Still, Matt, a 60-year-old salesman, was able to tell me what was going on. As part of his job, he occasionally had to take potential clients out to business dinners — lavish affairs at fancy restaurants, with rich meals and no small amount of alcohol. Earlier that night, after a few rounds of appetizers, a 12-oz. ribeye steak with all the trimmings, and tiramisu for dessert, Matt and his associates wound up at the restaurant bar, where he managed to work his way through three large beers. Clearly overfull, but happy, Matt made his way home in a taxi.

During the trip back, Matt was having a hard time taking a full breath, given how much he’d eaten. On top of that, the alcohol was making him nauseous, which was compounded by the bumpy cab ride. When the driver deposited him in front of his home, he barely had time to get through his front door and run to the bathroom before vomiting. In one particularly intense moment, he felt a spike of pain and thought something had ripped in his chest. But a few minutes later, the feeling had passed and he was able to make his way to bed.

Lying down, Matt soon knew something was very wrong. The pain in his chest returned and started to become even more severe. His heart began beating uncomfortably fast and he broke out in a drenching sweat. He also noted that his neck seemed to hurt. Initially thinking he was having a heart attack, Matt called 911 for an ambulance. Upon arriving in the ER, the nurse doing his initial evaluation noted that he had a fever of 101 degrees Fahrenheit. His electrocardiogram, or EKG, confirmed his rapid heart rate, known as tachycardia, but he wasn’t showing any signs of a heart attack. That’s when the ER doctor paged me.

One of the first things I noticed when examining Matt was that his neck looked puffy. When I touched the area, it felt like he had pockets of air trapped under the skin. This finding, known as subcutaneous emphysema, set off all sorts of alarms in my head. Subcutaneous emphysema can occur in a variety of settings, including to trauma victims with chest injuries or among deep-sea divers who surface too fast. Generally, it indicates a significant injury and that air is no longer confined to the lungs, escaping into other areas of the chest and neck. Speaking calmly, I asked the ER doctor to order a CT scan of Matt’s chest and neck right away.

The CT scan confirmed both that there was air under the skin in Matt’s neck and my worst fear: Matt had torn a hole in his esophagus. There was now significant air in the space between his lungs, known as the mediastinum, which had tracked up into his neck under the skin. The tear appeared to be at the lower left end of the esophagus, just above the diaphragm. The diagnosis was clear — Matt was suffering from what is known as Boerhaave’s Syndrome.

Many esophageal tears and ruptures are a result of trauma or complications of other medical procedures, but Boerhaave’s Syndrome refers to a so-called “spontaneous” rupture of the esophagus. When people vomit, the pressure in their abdominal cavity and esophagus becomes extremely high, while simultaneously the pressure in their chest cavity is extremely low. And when that vomiting is particularly severe, or when patients retch really hard, the pressure inside the esophagus becomes unbearable. At that point, a blow-out occurs.

An esophageal tear is a life-threatening event. Untreated, it is almost always fatal. Air, saliva, and gastric contents can now leave the esophagus and enter the chest cavity, where none of them belong. The mediastinum is ordinarily a sterile space, but easily becomes infected when an esophageal rupture occurs. Once infection sets in, patients often develop septic shock with dire consequences. Based on the CT scan results, Matt’s mediastinum only seemed to have air in it and did not look to be infected just yet. But that would change soon if we didn’t act fast.

The esophagus itself is a tricky organ to operate on, and surgical repair of an esophageal rupture is a significant undertaking that may require the patient’s chest to be fully opened to get the job done. Sometimes, small injuries can be repaired with less invasive surgical approaches, but the thoracic surgeon who came to see Matt didn’t think that would be the case here.

I suggested a different approach: an esophageal stent. Stents are flexible metal-mesh cylinders with a silicon coating that are placed without surgery. If we could place a stent in the esophagus, across the area of the perforation, it would seal the rupture off and provide a conduit for saliva and food to pass from the esophagus to the stomach. The stent doesn’t repair the perforation per se, but it creates an environment favorable to healing so the hole can close on its own. Surgery would fix the hole faster, but was far riskier and more invasive.

After discussing all of his options, Matt agreed to undergo stent placement. We moved him to a procedure room, where he was sedated, before I inserted a flexible endoscopic camera into his esophagus. The endoscopy revealed that Matt had a ragged, 3-centimeter-wide hole in the end of his esophagus. Using a special X-ray machine called a fluoroscope to guide me, I inserted the stent inside his esophagus. X-ray contrast injected into his esophagus afterwards did not show any signs of leakage. After that, we woke Matt up and moved him to the intensive care unit for close monitoring.

Over the following days and weeks, Matt recovered well. Initially fed by a feeding tube, he was soon able to transition to eating by mouth again. The stent in his esophagus was uncomfortable at first (it’s a big object), but he was able to get used to it. Six weeks later, I once again performed an endoscopy on Matt and removed the stent. Where the hole had been there was now an irregular, scarred area, but no signs of any perforation.

Esophageal stents are not magic — they can fail to fully seal off a hole or slip out of place, and are not always easy for patients to tolerate in terms of comfort. Matt was lucky; stenting worked well and allowed him to avoid surgery. After the stent was removed and he was getting ready to be discharged from the hospital, I overheard him on his cellphone booking another client dinner at a steakhouse. My eyebrows rose in concern. Noticing me, he cupped his hand over his phone. “Don’t worry, doc, I learned my lesson. Only the small filet for me!”

Douglas G. Adler is co-director of the Center for Advanced Therapeutic Endoscopy in Denver. The cases described in Vital Signs are real, but names and certain details have been changed.