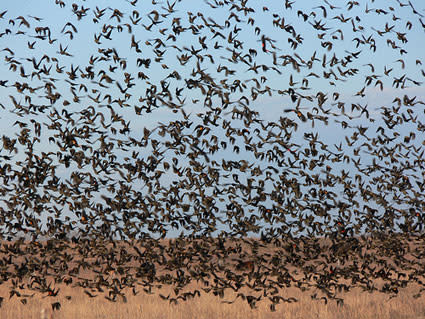 Since Monday's news that a few thousand birds fell from the sky on New Year's Eve over Beebe, Arkansas, the world has gone a little crazy with talk of the "aflockalypse": the mass bird deaths that have been documented worldwide. Bird die-offs have been reported in not only Arkansas but also in Italy, Sweden, Louisiana, Texas, and Kentucky. Die-offs of other animals, including thousands of fish in Arkansas, Florida, New Zealand and the Chesapeake Bay have also been noted, while dead crabs washed up on UK shores. Causes ranging from UFOs, monsters (our personal favorite), fireworks, secret military testing, poison, shifting magnetic fields, and odd weather formations have been blamed for the deaths, but researchers are saying these types of die-offs are normal. It's simply a coincidence that a few big ones happened right around the new year--and once the global media started paying attention to wildlife mortality, we saw examples everywhere. BoingBoing quotes Smithsonian Institution bird curator Gary Graves on the Arkansas bird die-off that got the conspiracy theory ball rolling:

He doesn't think these bird deaths are a sign of anything nefarious--or, at least, nothing more nefarious than local people taking it upon themselves to stress out a large roost of "nuisance" birds until it flies away. There's a head count associated with that kind of thing, he says, and it's not particularly odd to see a few thousand birds die this way. But, with roosts numbering in the millions of birds, that's not a large percentage lost. The only thing different in this case, he says, is that the dead birds landed on lawns, rather than in the wilderness.

Graves isn't the only scientist saying this isn't odd, but after the publication of various maps

showing wide-scale die-offs (without any comparable maps from last year) humankind's pattern-recognition abilities have gone a little overboard. Many are assuming that the die-offs must be related (BoingBoing

says it's a little like reading about homicides in different states and assuming that a serial killer is on the loose), and much of the coverage

. It will take weeks before conclusive tests on the animals can explain their deaths, and in that time some media outlets are spewing any theory they hear. So let's give thanks for responsible news organizations who have countered the stupidity and paranoia. National Geographic

talked to ornithologist Karen Rowe of the Arkansas Game and Fish Commission, who explained her theory of how the red-winged black birds died in Beebe:

"Right before they began to fall, it appears that really loud booms from professional-grade firework--10 to 12 of them, a few seconds apart--were reported in the general vicinity of a roost of the birds, flushing them out," Rowe said. "There were other, legal fireworks set off at the same time that might have then forced the birds to fly lower than they normally do, below treetop level, and [these] birds have very poor night vision and do not typically fly at night."

Rowe thinks that the birds, flying blind, crashed into houses and trees, and died of blunt force trauma. Monsters

(we still love this) aren't to blame for the other die-offs, either. The millions of juvenile spot fish that washed up on the shores of Chesapeake Bay were killed by hypothermia

, scientists say, when a sudden drop in temperature made the water too cold for fish to survive. Cold water temperatures may also have done in those British crabs

. The drum fish die-off in Arkansas might be due to a disease

(the fact that no other species in the Arkansas river was affected makes this likely), though testing isn't complete. Although having paranoid bunk passed around isn't usally great for science, some researchers optimistically suggest that there could be un upside to this: Maybe the hype will get more people thinking about the wildlife repercussions of their actions (be it enjoying fireworks or performing secret military tests or summoning monsters

"I wish I could take all this energy and attention on these deaths and direct them toward true crises in wildlife biology, to things like the white-nose syndrome in bats," Rowe added. She does, though, see a silver lining in the sky-is-falling coverage this week. "I hope we can raise public awareness of what impact man-made structures can have on other species. How many migratory warblers do you want to kill just to get better cell phone reception?"

The Intersection: What Should Science Organizations Say About Religion? Answer: A Lot

DISCOVER: 20 Ways the World Could End