Adam was African, but perhaps barely 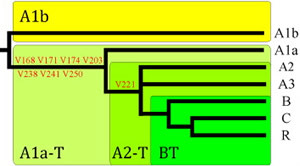 The figure to the left comes from a short paper in The American Journal of Human Genetics, A Revised Root for the Human Y Chromosomal Phylogenetic Tree: The Origin of Patrilineal Diversity in Africa. The paper is interesting because of two factors: 1) they sequenced more of the Y chromosome 2) their African data set of individuals was very large, in excess of 2,000. The weird thing about the results is that it upends one of the truisms in human phylogenetics: that African Pygmies and Khoisan are basal to other human lineages. By this, I mean that they "split off" first (this is why people say these are the "oldest" human populations). This is not what these researchers found. Rather, the basal Y chromosomal haplogroups were concentrated in Central West Africa and Northwest Africa! The map below shows the distributions of the two most divergent Y chromosomal lineages, red being the outgroup, and green being the second most divergent: 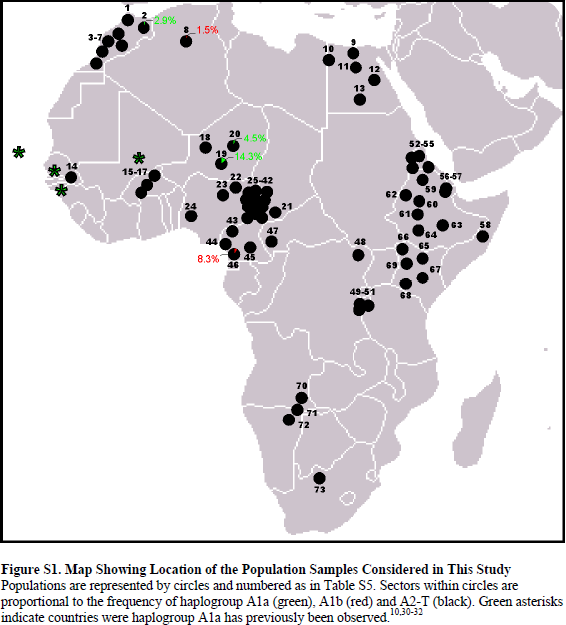 A second major point in this paper is that they recalculated the coalescence back to the last common ancestor of these Y chromosomal lineages, and doubled that value, to ~140,000 years. I don't know the technical details of the calibration well here, last I checked the dates for Y chromosomal lineages were a total mess. So I'm not going to express confidence in this specific value, but, it does align well with a suspicion among many people that the idea of modern humans all tracing back to ancestors on the order of ~50,000 years B.P. just isn't tenable any longer (this excludes the issue of possible admixture with other lineages such as Neandertals). Dienekes has a lot more to say. I'm kind of left scratching my head. Remember that this is the male lineage of humanity. Who knows what peculiarities there are here? Here's their conclusion:

In conclusion, we present here a Y chromosome phylogenetic tree deeply revised in its root and earliest branches. Our data do not uphold previous models of Y chromosomal emergence...and demand a reevaluation of some fundamental ideas concerning the early history of the human genetic diversity we find today....Our phylogeny shows a root in central-northwest Africa. Although this point requires further attention, we think that it offers a new prospect from which to view the initial development of our species in Africa.