According to this study, artists are more "manly" than regular folk. 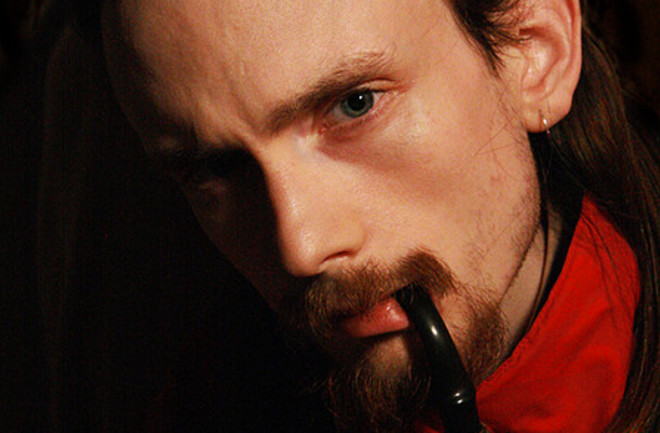 Image: Flickr/Faith GobleDespite the stereotypical association between the artistic and the feminine, these scientists believe the opposite is true: that artists are actually more masculine. They note an association between the peak years of productivity of male artists and their fertility. They also show that artists tend to have a shorter 2nd to 4th digit ratio than non-artists, a trait associated with higher testosterone levels during development. This correlation was true for both male and female artists, suggesting a general association of testosterone and artistry. The authors conclude that "art may represent a sexually selected, typically masculine behavior that advertises the carrier's good genes within a courtship context." We'll leave it to you to comment on the general suitability of artists as mates...Art as an indicator of male fitness: Does prenatal testosterone influence artistic ability? "In his groundbreaking research, Geoffrey Miller (1999) suggests that artistic and creative displays are male-predominant behaviors and can be considered to be the result of an evolutionary advantage. The outcomes of several surveys conducted on jazz and rock musicians, contemporary painters, English writers (Miller, 1999), and scientists (Kanazawa, 2000) seem to be consistent with the Millerian hypothesis, showing a predominance of men carrying out these activities, with an output peak corresponding to the most fertile male period and a progressive decline in late maturity. One way to evaluate the sex-related hypothesis of artistic and cultural displays, considered as sexual indicators of male fitness, is to focus on sexually dimorphic traits. One of them, within our species, is the 2nd to 4th digit length (2D:4D), which is a marker for prenatal testosterone levels. This study combines the Millerian theories on sexual dimorphism in cultural displays with the digit ratio, using it as an indicator of androgen exposure in utero. If androgenic levels are positively correlated with artistic exhibition, both female and male artists should show low 2D:4D ratios. In this experiment we tested the association between 2D:4D and artistic ability by comparing the digit ratios of 50 artists (25 men and 25 women) to the digit ratios of 50 non-artists (25 men and 25 women). Both male and female artists had significantly lower 2D:4D ratios (indicating high testosterone) than male and female controls. These results support the hypothesis that art may represent a sexually selected, typically masculine behavior that advertises the carrier's good genes within a courtship context." Related content: NCBI ROFL: Men without a sense of smell exhibit a strongly reduced number of sexual relationships. NCBI ROFL: The effects of acute ethanol consumption on sexual response and sexual risk-taking intent. NCBI ROFL: Sexual intercourse and masturbation: Potential relief factors for restless legs syndrome?